LCA does 1st carrier landing, but will Indian Navy ever buy it? 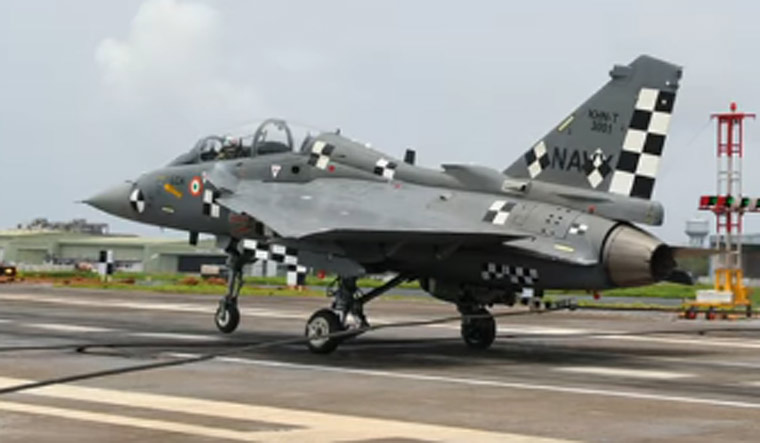 Screengrab of the first arrested landing of the LCA Navy | DRDO

On Saturday morning, congratulatory messages poured in for the DRDO and the Aeronautical Development Agency (ADA) for conducting the first landing on an aircraft carrier of the naval variant of the LCA fighter. The naval variant of the LCA Mk-1, a single engine aircraft, undertook its first-ever arrested landing on the INS Vikramaditya on Saturday.

However, the Indian Navy's Twitter handle seemed to describe the importance of the naval LCA's carrier landing milestone in terms of providing inputs for a future twin-engine fighter that could make its first flight by 2026.

The Indian Navy tweeted, "With this feat, the indigenously developed niche technologies specific to deck based fighter operations have been proven, which will now pave the way to develop and manufacture the Twin Engine Deck Based Fighter for the #IndianNavy."

During his annual press conference ahead of Navy Day, Indian Navy chief Admiral Karambir Singh, effectively, confirmed a proposal for a new project by DRDO to develop a twin engine fighter for aircraft carriers.

Singh said the new twin-engine aircraft would be ready for its first flight by 2026. “The qualitative requirements are being made. They [DRDO] said they should be able to push it out by 2026. If it meets our time and QR requirements, we will definitely take it," Singh was quoted as saying by The Hindu. Singh added that the current LCA Mk-1 was a "technology demonstrator" to prove technologies for the proposed twin-engine fighter.

The programme to design a naval variant of the LCA was initiated in 2003. The naval variant featured modifications of the nose of the aircraft to improve visibility for landing as well as reinforced undercarriage and landing gear to deal with the increased airframe stress due to carrier operations. The naval LCA prototype made its first flight in April 2012.

In 2016, then Indian Navy chief admiral Sunil Lanba signalled that the naval version of the LCA Mk-1 did not meet Indian Navy requirements and had been plagued by delays. By then, the Navy had reportedly spent over Rs 3,000 crore on supporting design work on the naval LCA.

According to Delhi Defence Review, a defence publication, modification of the LCA Mk-1 for carrier operations reduced its capability to carry heavy weapons and fuel tanks under its wings, undermining its utility in combat operations. The DRDO had also offered the Indian Navy a MK-2 variant of the LCA, which would feature a more powerful engine.

Concept images of the proposed twin engine fighter have been circulated on social media since December. The proposed fighter would also have an Air Force variant, which NDTV reported would be called the Omni Role Combat Aircraft (ORCA). The concepts show a fighter similar in configuration to the Rafale fighter being purchased from France for the Indian Air Force. However, the significantly larger size of the proposed twin engine fighter and changes needed to accommodate two engines could complicate its design and development process.

The Indian Navy is already considering the purchase of 57 fighters at an estimated cost of around Rs 90,000 crore, for which the Rafale and US-built Super Hornet are considered to be the main contenders.