Replug: VHP continues to dream about the grand Ram temple

Contrary to popular notion, many of the VHP's 13 lakh members are not from the RSS 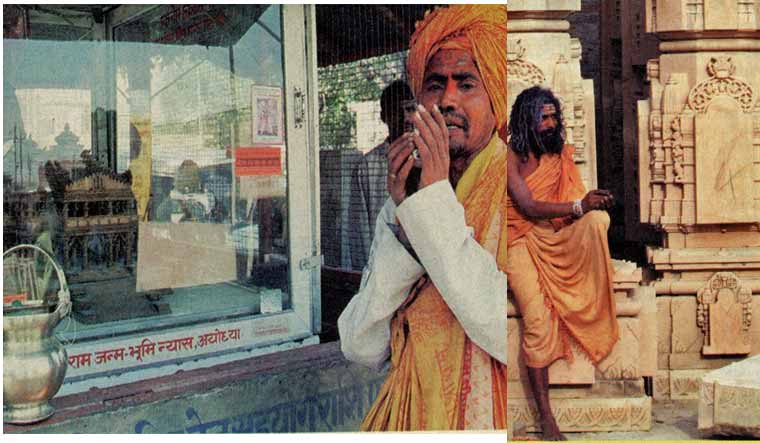 L: A devotee before a model of the proposed Ram temple | Pawan Kumar

This story originally appeared in THE WEEK issue dated December 8, 2002

It is the organisation which brought down Babri Masjid. It leads the campaign to construct "a grand new Ram temple" at the disputed site in Ayodhya. Few of its leaders have contested elections, yet it claims to represent the interests of crores of Hindus round the world. It has held successive governments to ransom, it spews venom against minorities, it mocks political leaders from Sonia Gandhi to Lal Krishna Advani—yet it claims to be non-political.

What is this entity called the Vishwa Hindu Parishad (VHP)? Where did it spring from? Where is it going? To what extent is it amenable to RSS control? Curiously, the prime mover behind the formation of the VHP was not the RSS, but a subeditor-turned-sanyasi Swami Chinmayananda. Nearly 40 years ago, on August 19, 1964, Chinmayananda convened a meeting of 75 leading Hindus at his Mumbai headquarters.

VHP was born out of this meeting on Lord Krishna's birthday. Among them were a Mauritian representative (hence the 'Vishwa' tag), the Hindu scholar K.M. Munshi, the industrialist Hanuman Prasad Poddar, and most importantly, Madhav Sadashiv Golwalkar, the second sarsangchalak of the RSS.


Contrary to popular notion, a large number of the VHP's 13 lakh members are not from the RSS. Its presidents, from the first Jaya Chamraj Wodeyar to the present Vishnu Hari Dalmia, have nothing to do with the RSS. The same is true of the sants and mahants associated with it. But from the beginning, the key controls were in RSS hands. "I have neither manpower nor money power," Chinmayananda said to Guru Golwalkar. "For these I intend to rely on you. I am only capable of making fine speeches." Important VHP players like Ashok Singhal, Pravin Togadia and Giriraj Kishore have RSS backgrounds.


The VHP's stated objectives are threefold: consolidating and strengthening Hindu society; protecting and spreading Hindu values; building links for the Hindu diaspora. Today it has 38,812 units in India and a presence in 20 other countries. (Of these, 10,000 are in Gujarat, which explains why the VHP is such a crucial factor in the elections there.) And while its snarling, bigoted face is a familiar one, it is also engaged in extensive social service.


Till 1977, when it handed over all its units to the Banwasi Kalyan Ashram, it was working extensively among tribals as well. Yet, till the VHP launched the Ayodhya agitation in 1984, it was hardly known. "Constructive work doesn't make news," observed VHP joint general secretary Champak Rai wryly. "Agitations do."


The agitations, though, can hardly be called successful. The Ayodhya movement may have brought the BJP to power, but it has done little for the VHP: ten years after the demolition of Babri Masjid, 'the grand Ram temple' which it had hoped to build in its stead remains a distant dream. Its dream of 'liberating' two other shrines—the Kashi Vishwanath temple in Varanasi and the Krishna Janmabhoomi at Mathura—remains as distant as ever.

What has the VHP achieved?

"We have brought unity to the Hindu community," maintained Rai. "Before the VHP came into being, the different sects and denominations among Hindus, had hardly any interaction. We have brought them together on a common platform."


The VHP's conversion efforts are also continuing apace. "We explain to tribals that the British falsely categorised them animists, whereas in fact they are very much part of the Hindu family, since Hindus worship nature too," Rai noted. "We remind Muslims and Christians that their ancestors were once Hindus. Some compelling circumstances may have forced them to convert many years ago. Why not rectify that mistake and return to the fold?"


But why does the VHP call itself 'apolitical' when it so often functions as a handmaiden of the BJP? From the shilanyas of the Ram temple at Ayodhya in November 1989 to the recent attempted yatra in Gujarat which the Election Commission banned, many of the VHP's controversial programmes have coincided with crucial elections. "Strike when the iron is hot," said Rai. "The iron is hottest during election campaigns, and politicians are most amenable to pressure. We seek to take advantage of that. It doesn't mean we are trying to help the BJP."


So when will the iron hot up next, enabling the VHP to complete its unfinished Ayodhya task? "Work on the Ayodhya temple has never stopped," said Rai. "Even during our worst days in early 1993, when the VHP was banned, the carving and chiselling of stone pillars for the temple continued. It still does." But the actual construction at the disputed site? Rai grew coy. "Just as the Babri structure was brought down when no one expected it, so too the new temple will rise when no one expects it to."

The origin of the Babri Masjid-Ram Janmabhoomi dispute dates to 1528. A mosque, according to the VHP, was then built at the birthplace of Lord Ram, demolishing an 11th century temple built by Vikramaditya. The first is a matter of faith; the second has been hotly debated.

The first recorded incidents of violence between Hindus and Muslims occurred in 1853. The nawab of Avadh, Wajid Ali Shah, tackled the problem. It came up again in 1858 following a Muslim complaint to the British. In January 1885, a Hindu priest wanting to build a temple next to the masjid filed a suit, but the district court did not allow it. Judicial proceedings recommenced in 1950.