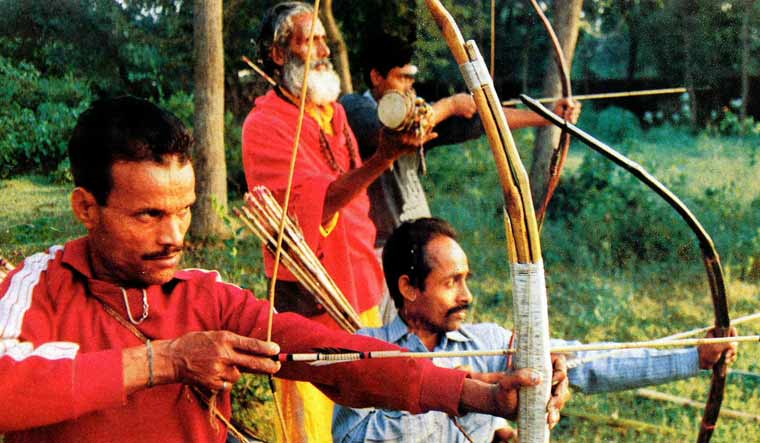 This story originally appeared in THE WEEK issue dated December 6, 1992

As the December 6 deadline set by the Ram brigade hurtled towards them, the main players seemed to be walking on burning coal. The Centre was breathing hard, the Vishwa Hindu Parishad hopping mad, and the BJP betraying signs of fear. The air had become explosive all of a sudden. Excitement mounted with the talk that the Kalyan Singh government in UP would be dismissed and that the army would be called in to protect the disputed shrine. There was no ebbing of tension even after the BJP government buckled down and told the Supreme Court that it would allow only a nominal kar seva.

All eyes were riveted on VHP, whose hot-heads wanted the state government to be sacrificed at the temple's altar. There was waving of white flags and olive branches before action gathered momentum. A special plane took off from New Delhi on November 24 to pick up a saffron-swathed man in Ayodhya. But, Paramahams Ramachandra Das of Ram Janmabhoomi Nyas chose to travel to the capital by an Indian Airlines flight. What he told the Prime Minister was dispiriting: "It is too late to postpone the kar seva." A hardliner, Das was the original litigant in the Ayodhya case. High-flying godman Chandraswamy, too, was in the thick of it. He had a series of meetings with sadhus at his Vishwa Dharmayatan Ashram in Delhi. Said Acharya Giriraj Kishore, VHP vice-president: "The Prime Minister is trying to create a split among the sants through his friend Chandraswamy."

The desperation of the Centre was apparent: talks with VHP having failed, Rao was trying to win over individuals. But they were hardly impressed by the fine distinction he drew between politics and Ram temple construction. Das, for instance, told him bluntly that he had nothing to do with politics; all that he was concerned about was the temple construction. He also cautioned Rao that a confrontation on December 6 was probable because the credibility of the sants was at stake. It was the sants who issued the kar seva call at the dharma sansad on October 31.

A confrontation, which can trigger riots, was just what the Centre and the Kalyan Singh government were trying to avert. However, contingency plans were ready. Battalions of paramilitary forces moved to Ayodhya, and there was talk of commandoes trained in unarmed combat rehearsing at a replica of the shrine. Kid-gloves treatment too was thought of: rubber bullets of the newly created Rapid Action Force and cold water hoses to drench and disperse the kar sevaks in the December chill.

Rao had been keen on wriggling out of the deadline trap before he left for Senegal on November 20 and had a 50-minute meeting with BJP leader L.K. Advani. Advani told him that his party was agreeable to a single-point reference of Ayodhya to the Supreme Court under Section 143 of the Constitution. A day earlier, Union Home Minister S.B. Chavan had discussed with Advani the proposal to make the reference under Section 138(2). But Kalyan Singh, who met Rao the same evening, told him that such a reference would mean no solution for 40 years.

Until November 26, Ayodhya did not feel need to check its pressure gauge. The temple town of 50,000 people was completely placid, life went on uneventfully. But there were two developments on that day which, while not affecting normal life, gave rise to tension.

The first was the arrival of a few thousand kar sevaks, local leaders from various parts of the country. They had come to find out about the arrangements for accommodation for the large numbers converging after November 30. The second was the arrival of 90 companies of Central forces in 300 Delhi Transport buses and two special trains at Faizabad, six kilometres away.

The forces—drawn from CRPF, BSF, CISF and RAF—had been dispatched without the state government's request or consent. Soon there sprang up a tent township in Faizabad's cantonment area to house them. Some companies were strategically stationed 20 km from Ayodhya. The purpose of their arrival was clear: to ensure that there would be no kar seva on the 2.77 acres of land in front of the disputed shrine.

Their arrival was in one sense a great benefit to VHP whose leaders were screaming their head off about the impending confrontation with the Centre. Several days before the paramilitary came, militant Bajrang Dal chief Vinay Katiyar declared: "The Centre is planning repression on a scale which will surpass even Mulayam Singh Yadav's efforts in 1990. It is even ready to move the military."

Other leaders like Gulab Parihar and Sadhvi Rithambhara were making such statements even when there was no evidence to suggest that the Centre intended a confrontation. Obviously, they had realised that strong Hindu sentiment in favour of the Ram temple could only be roused in a climate of confrontation. The paduka pujan programme (worship of clogs similar to the ones believed to have been worn by Ram and worshipped by his brother Bharat eons ago) was conducted throughout October in a bid to drum up support for the kar seva. It failed to evoke much response in UP, mainly because it encountered no obstruction.


Simultaneously in the same morale-boosting exercise, VHP leaders were pooh-poohing the Centre's threat of dismissing Kalyan Singh. "This eunuch government cannot handle Punjab, Kashmir or Assam,” roared Gulab Parihar at a meeting. "Do you think it can stand up when kar sevaks march to Ayodhya? I would advise the Prime Minister to take a lesson from recent history. Three Prime Ministers have already lost their seats in a bid to prevent the mandir from being built."


Katiyar asserted: "Even if all the top leaders are arrested, the kar seva will begin exactly at 12.15 pm. on December 6. If the BJP government is dismissed it will not be possible for us to guarantee the security of the disputed shrine. We may sincerely want to. But how can we restrain our inflamed cadres? In those circumstances we abjure responsibility." The constant attempt at building up a bogy and then demolishing it was having its effect: a lukewarm public slowly began taking some more interest in the kar seva than it was doing a fortnight earlier.

But if VHP was going all out against the Centre, the BJP was treading much more cautiously, even as it was cooperating actively with VHP. A meeting of its legislature party at Kalyan Singh's residence on November 24 directed all MLAs to return to their constituencies to encourage greater participation in the kar seva. Each MLA was asked to send at least 500 people. But at the same time it was not too keen on being dismissed either, its record of a year and a half being not exactly spectacular.


"Apart from the mandir issue, the BJP has nothing to bank upon in the event of an election," said Tirath Ram Agarwal, Lucknow unit of UP traders association which had once strongly backed the BJP. Agarwal's view was almost universally shared. Nowhere s the dilemma of the BJP government more plainly visible than in the attitudes struck by Kalyan Singh.

Until early November, Kalyan Singh openly struck a tune very different from VHP general secretary Ashok Singhal's. He maintained that "no time limit should be set for the solution of a matter as complicated as Ayodhya." That was when Singhal was insisting that there was no question of giving Rao more time. Bowing to his national leadership's directive, Kalyan Singh did stay away from the National Integration Council (NIC) meeting. But he was clearly most abashed about it. Not once did he criticise the NIC or question its utility in the manner that BJP's national leaders did. Subsequently he floated various formulae to avoid a confrontation with the Centre.

Kalyan Singh's first attempt was to obtain a final verdict on the acquisition of the contentious 2.77 acres on which kar seva is slated to begin. The land was acquired by the state government in October last year for tourism development. The acquisition was challenged by Mohammed Hashim, a resident of Ayodhya, who claimed that it was also part of the disputed area. The High Court had passed an order calling for the maintenance of status quo in the disputed area.

The state government argued that this portion did not fall in the disputed area. In an interim judgment on October 25 last year the court allowed the state government to acquire the land, but laid down that no permanent structure be built on it. Nor could it be transferred to a third party (like VHP).

A second order on July 15 this year (1992) demanded that the construction which VHP had undertaken be stopped. On November 24 the BJP government moved the court for an early verdict in this case. Said one of its lawyers: "If the acquisition is upheld, there is no problem, kar seva can begin at once. If it is struck down, then too the interim stay order is automatically vacated and the land goes back to its former owner—VHP!"

Indeed in the interim period VHP purchased most of the disputed areas— around 2.07 acres out of the total 2.77 acres—from the earlier owners. Thus it would be free to build on its own land without touching the shrine.

But with the court turning down the prayer for an early decision, the tantalising wait continues. Kalyan Singh's second suggestion, which he made the BJP leadership agree to, was a package deal by which the BJP agrees to refer the disputed shrine itself to adjudication by the Supreme Court and promises to abide by its verdict. In return the Centre permits VHP to restart its kar seva on the 2.77-acre site. Singh's letter to the Prime Minister on November 26, urging resumption of the stalled dialogue between VHP and Babri Masjid Action Committee was another olive branch. "There is still a week to go," he said. "Much can be accomplished during this period." Or lost.

—DEBASHISH MUKERJI in LUCKNOW with RAVINDRA DUBEY In Delhi