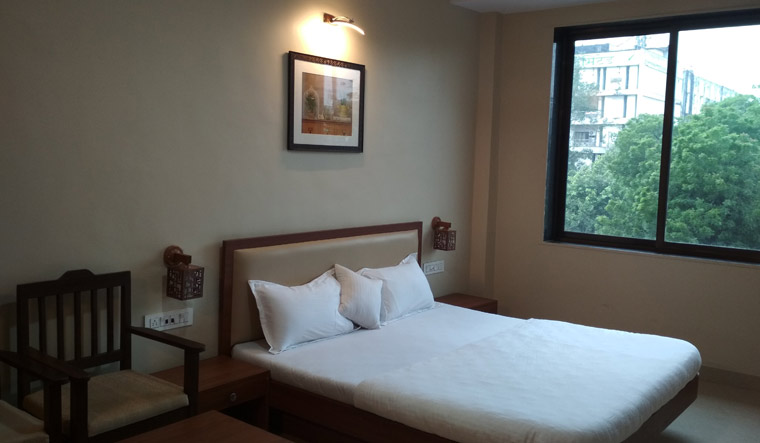 The facility is available 24 x 7

The next time you happen to be at the Kalupur Railway Station in Ahmedabad and have missed a train or are waiting for a connecting train, you no longer have to worry about a place to rest or keep your luggage. IRCTC has opened a three-star facility with retiring rooms and an executive lounge.

Out of the 12 rooms, seven have already come up. The rooms can be booked for durations of six to 48 hours, either online or at the reception of the retiring rooms, according to Dharmesh Parikh, who heads the operations in Ahmedabad. The tariffs for single-room occupancy range from Rs 1,000 to Rs 3,600 for six to 48 hours.

All the rooms are air-conditioned and hotel-like room services are provided, said Manoj Singh, shift in-charge. Opened on September 19, the facility is witnessing nearly 90 per cent occupancy.

The executive lounge has also started getting good footfalls and the charges for using it for an hour are only Rs 60. Gurdeep Singh, an advertising professional, remarked that he found the lunch offered very good and economical. “Once you are in the lounge, you need not worry about the luggage and the safety is automatically taken care of,” said the 28-year-old, who hails from New Delhi and was waiting for his train.

The lounge provides much more than just sitting facility and food. There is shower and change room, which can be used at an additional cost of Rs 83. The dental and shaving kits come at Rs 40 each.

PRO of Western Railways (Ahmedabad Division) Pradeep Sharma said the facilities are only for those travelling by train with proper tickets. “It is not for someone who is looking for a good option to stay,” he said, adding that now the passengers waiting for a connecting train need not go out in search of a hotel.