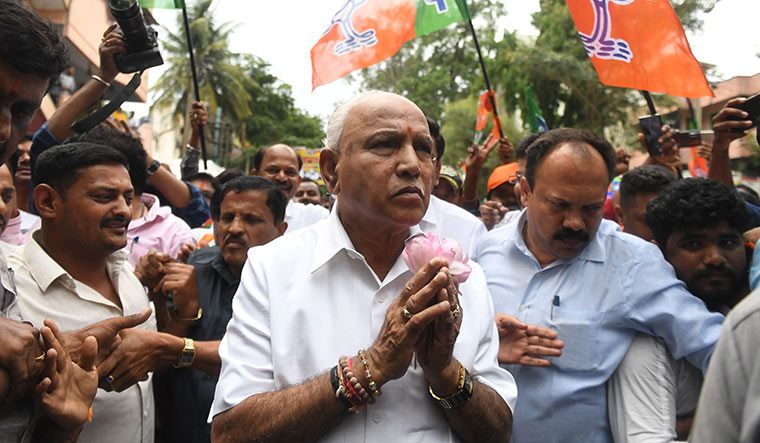 In a surprise move, the Election Commission of India has announced bypolls to 15 out of the 17 Assembly constituencies in Karnataka that fell vacant following the disqualification of the rebel Congress and JD(S) MLAs in July this year.

The bypolls to these 15 seats will be held on October 21, and the results will be declared on October 24. However, the bypolls to Maski and RR Nagar constituencies, previously held by rebel Congress MLAs Pratapgouda Patil and R. Munirathna respectively, have been put on hold.

The 17 rebel MLAs—13 Congress, three JD(S) and one independent, who had been disqualified by then Assembly Speaker Ramesh Kumar for the full term of the current Assembly that ends in 2023, were jolted by the announcement of the bypolls. The legal tangle now prevents them from contesting the bypolls.

Soon after their disqualification, the rebels had challenged the speaker's ruling, in the Supreme Court, saying they all had tendered their resignation prior to their disqualification. The next hearing in the case is on September 23. The rebels are hoping that the apex court rules in their favour, as there is little time to file their nominations as the last date is September 30.

The political parties which had expected the bypolls only in late November are on their toes. They will now need to finalise their candidates within the next 10 days.

The BJP is treading with caution as the stability of B.S. Yediyurappa government will be at stake if the party fails to win at least six of the 15 seats in the bypolls. At present, BJP holds 105 seats in the Assembly with a current strength of 207, and has the support of independent MLA and minister H. Nagesh.

The party had plans to give tickets to a majority of the rebels, but is now in a fix. It can neither field the rebels sans the SC ruling in its favour, nor look for fresh candidates.

Chief Minister Yediyurappa has gone into a huddle with disqualified legislators, legal experts and party leaders to chalk out a plan to tide over the crisis. While the rebels are toying with the idea of fielding their kith and kin, it remains to be seen if the party leadership would yield to their demands.

The Congress is yet to disclose its intent to continue with the JD(S)-Congress alliance. However, former chief minister Siddaramaiah has said that his party will field candidates in all 15 constituencies.

JD(S) patriarch H.D. Deve Gowda, too, said his party would contest in all the constituencies.

"We have heeded to the party workers' opinion and want to go it alone in the bypolls. The Congress high command is in a state of confusion over choosing the state president and the leader of the opposition. We don't want to add to their woes by discussing the alliance," said Deve Gowda.

"We have suffered enough in the coalition. So, JD(S) will go it alone in the bypolls. The BJP government will crumble on the day of the bypoll results," said former chief minister H.D. Kumaraswamy.