Modi, Trump to discuss Kashmir, trade at G7. Will Iran and Russia figure in conversation?

In July, Trump had offered to be the "mediator" between India and Pakistan 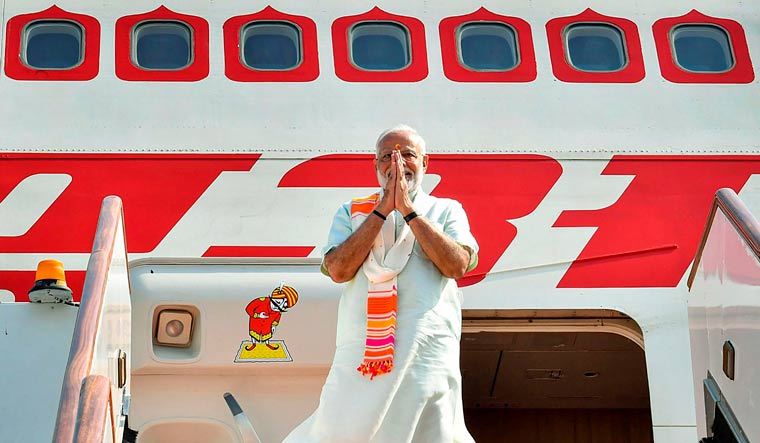 Prime Minister Narendra Modi, who on Sunday arrived in France to attend the G7 Summit, will speak with US President Donald Trump on issues as wideranging as Kashmir and trade. Earlier this week in Washington, Trump said that he would discuss with PM Modi the situation in Kashmir and help ease the Indo-Pak tensions. "The Prime Minister reached Biarritz in France, where he will take part in G7 Summit. In addition to the multilateral components of the Summit, he would also be meeting world leaders in separate bilateral interactions," the Prime Minister's Office said in a tweet. Times of India reported that India would speak on Russia's inclusion in the G7—it was earlier expelled—and the possibility of an Iran nuclear deal.

The countries which are part of the G7 include the UK, Canada, France, Germany, Italy, Japan, and the US. Though India is not a member of the G7 grouping, Modi has been personally invited by French President Emmanuel Macron. Tensions between India and Pakistan spiked after India abrogated provisions of Article 370 of the Constitution to withdraw Jammu and Kashmir's special status and bifurcated it into two Union Territories, evoking strong reactions from Pakistan.

In July, Trump had offered to be the "mediator" between India and Pakistan on the Kashmir issue as he met Khan at the White House where the two leaders discussed a host of issues, including the Afghan peace process. This was rebuffed by the Indian leadership. In August, he made a second, public offer. "Kashmir is a very complicated place. You have Hindus and you have the Muslims and I wouldn't say they get along so great," Trump told mediapersons. "I will do the best I can to mediate," he said, NDTV reported. "You have two counties that haven't gotten along well for a long time and frankly, it's a very explosive situation," he added.  The statement offers an interesting insight into the views of Donald Trump on Kashmir—a territory over which India and Pakistan have gone to war four times, and a geopolitical issue since time immemorial; he sees it, in essence, as an extrapolation of the larger Hindu-Muslim rift. Conversely, this could also be a plan to put pressure on PM Modi ahead of their meeting at the G7 summit in France. Or could this be a pawn to put more pressure on India in the issues of trade, which had become a sticking point for the two nations especially after Trump came to power. India's plan to purchase S-400s from Russia is also a point of contention for the US.

In June, Prime Minister Narendra Modi and President Donald Trump on Friday "aired" their concerns over the bilateral trade disputes and agreed for an early meeting of their commerce ministers to sort out the issues. President Trump said India's "very high" tariffs on US goods are "unacceptable" and must be withdrawn. "I look forward to speaking with Prime Minister (Narendra) Modi about the fact that India, for years having put very high tariffs against the United States, just recently increased the tariffs even further. This is unacceptable and the tariffs must be withdrawn!" Trump said in a tweet.