Hindus and Muslims: An insight into Trump's views on Kashmir as he again offers to mediate

"You have Hindus and you have the Muslims" 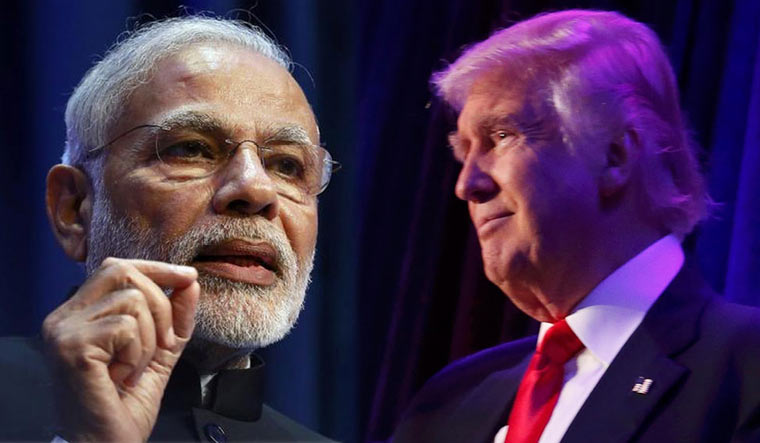 US President Donald Trump on Tuesday offered to mediate on Kashmir, after successive phone calls with Prime Minister Narendra Modi and Imran Khan. This time, he made a second, public offer. "Kashmir is a very complicated place. You have Hindus and you have the Muslims and I wouldn't say they get along so great," Trump told mediapersons. "I will do the best I can to mediate," he said, NDTV reported. "You have two counties that haven't gotten along well for a long time and frankly, it's a very explosive situation," he added.

The statement offers an interesting insight into the views of Donald Trump on Kashmir—a territory over which India and Pakistan have gone to war four times, and a geopolitical issue since time immemorial; he sees it, in essence, as an extrapolation of the larger Hindu-Muslim rift. Conversely, this could also be a plan to put pressure on PM Modi ahead of their meeting at the G7 summit in France.

Even in July, Trump had offered to be the "mediator" between India and Pakistan on the Kashmir issue as he met Khan at the White House where the two leaders discussed a host of issues, including the Afghan peace process. This was rebuffed by the Indian leadership.  "We have seen @POTUS's remarks to the press that he is ready to mediate, if requested by India & Pakistan, on Kashmir issue. No such request has been made by PM @narendramodi to US President," Ministry of External Affairs spokesman Raveesh Kumar tweeted.

In the first highest-level interaction after India's announcement on Jammu and Kashmir, Prime Minister Narendra Modi on Monday held a telephonic conversation with US President Donald Trump, and conveyed that extreme rhetoric and incitement to anti-India violence by certain leaders in the region was not conducive to peace. Modi's comments on extreme rhetoric by some regional leaders was an obvious reference to Pakistan Prime Minister Imran Khan, who has been making provocative comments against the Modi government and Indian action in the last few days.

Following that, Trump asked Khan to "moderate rhetoric" with India over Kashmir, as he underlined the need of exercising "restraint" by both sides and avoid escalation of the "tough" situation in the region.

After a failed bid to internationalise the dispute over Kashmir at the United Nations Security Council (UNSC), Pakistan has now decided to take the matter to the International Court of Justice (ICJ), according to its foreign minister Shah Mehmood Qureshi. Speaking to ARY News TV, Qureshi said, “We have decided to take Kashmir case to the International Court of Justice," adding that the decision was taken “after considering all legal aspects.

The case will be filed on the basis of alleged violation of human rights in Kashmir. Pakistan has also decided to hire services of lawyers of international repute to file and pursue the case. Tensions between India and Pakistan spiked after India abrogated provisions of Article 370 of the Constitution to withdraw Jammu and Kashmir's special status and bifurcated it into two Union Territories, evoking strong reactions from Pakistan.