You will get bloodier nose next time: Army Chief warns Pak against misadventures

On July 26, 1999, Army had declared successful culmination of 'Operation Vijay' 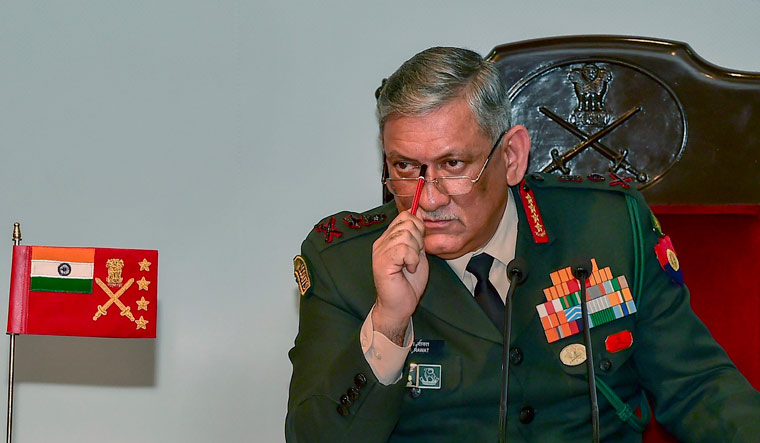 Indian Army Chief Bipin Rawat has warned Pakistan that it will get a bloodier nose next time if it goes on another misadventure with India. He was speaking on the eve of the 20th anniversary of Kargil War victory. "Don't do it. Misadventures are normally not repeated. You will get a bloodier nose next time," he said, reported ANI.  "Our focus is on Artillery weapon system, by 2020 we will get the Howitzers, K-9 Vajra is being manufactured in the country," he said, adding that the focus was on modernising the inventory.

Army Chief General Bipin Rawat on being asked 'what message you will to give to Pakistan on #KargilVijayDivas; Don't do it. Misadventures are normally not repeated. You'll get a bloodier nose next time. pic.twitter.com/3NZWkLOB9z

On July 26, 1999, Indian Army had declared successful culmination of 'Operation Vijay', declaring a victory after nearly three-month-long battles on the icy heights of Kargil. India had lost around 500 soldiers in the war.

President Ram Nath Kovind, Prime Minister Narendra Modi, Defence Minister Rajnath Singh led the nation in paying tributes to the Kargil heroes, extolling the courage, bravery and dedication of the soldiers who were part of the operation.

Singh said the "unwavering courage and supreme sacrifice" of the Kargil martyrs ensured the safety and sanctity of India's borders.

"July 26 is immortalised as 'Kargil Vijay Diwas' and represents a saga of glorious victory of the nation in the Kargil conflict fought from May-July in 1999. Indian Army soldiers fought legendary battles in Dras, Kaksar, Batalik and Turtok Sectors. We salute the courage, valour and sacrifices of our martyrs and heroes," the Army said in a statement.

The Indian Army responded to the intrusion with 'Operation Vijay', fighting battles on rugged terrains and difficult peaks.

The Indian Air Force had joined the operation with their 'Operation Safed Sagar' under which, the IAF for the first time used high-precision bombs to target the enemy.

The Mirage-2000 aircraft played a crucial role in the battles fought during the war and also hit enemy targets bunkered in at the Tiger Hill, besides tasting success at Muntho Dhalo in June 1999.

"Mirage-2000 was the game changer in the Kargil War. It skewed the asymmetry of the military assets in our favour," senior IAF officer, Gp Capt Anupam Banerjee told PTI.