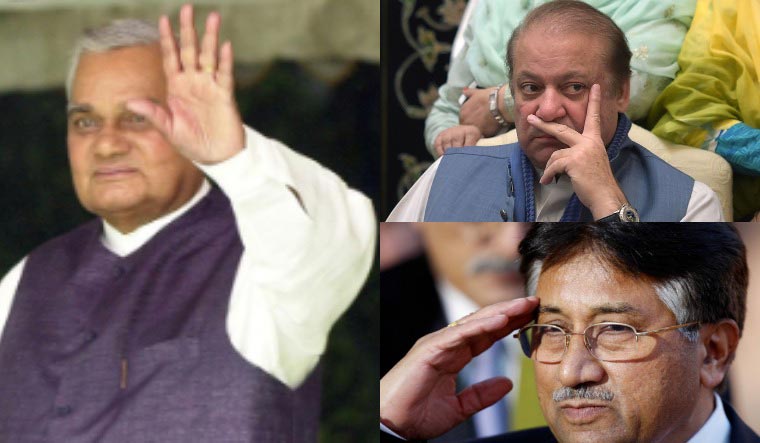 Atal Bihari Vajpayee's second government—his first reign had lasted 13 days in 1996—had been barely a year old, when it fell for want of one vote in the Lok Sabha on April 17, 1999.

The president ordered fresh elections, and Vajpayee was continuing in caretaker role when two yak-herds went up the hill on May 3 to look for a missing yak, and spotted intruders up there. They alerted the local Army unit, which realised that the enemy had climbed up the hill when it had been snowing and occupied it. The enemy would now be able to see the Srinagar-Leh road clearly, and guide artillery fire from the Pakistani side to hit the road when Indian convoys would be driving up to supply the Indian Army formations in Ladakh. That would affect the supply line and it would then be easy for Pakistan to capture Ladakh.

The Army launched localised actions, mostly at battalion levels. As a scout party led by Lt. Saurabh Kalia was captured (he would be later tortured to death), it became clear that the enemy meant business. They were not just stray intruders, but a military enemy whose intention was to capture territory.

As localised ground actions proved futile and costly, the Army, under General V.P. Malik, asked for air support. The then Indian Air Force chief, air chief marshal A.Y. Tipnis, warned that use of air power carried the risk of escalation. He would give air support only if the cabinet was willing to take the risk.

The caretaker cabinet of Vajpayee agreed to use of air power, but told the Indian Air Force not to cross the Line of Control. That was the first major political decision that directed the course of the Kargil war.

The whole conduct of Vajpayee's politics during the Kargil war was guided by the principle of extreme restraint. Only a year earlier, had he conducted the nuclear tests and declared India a nuclear-armed power, provoking Pakistan to follow suit. Virtually the whole world had condemned the tests, and the sanctions imposed by the US and several other major powers were crippling the economy. Obviously, going for an all-out war, however justified it was, would have attracted further condemnation.

The restraint did take its military toll. Tactics of indirect approach, or flanking approach, whereby you hit the enemy from behind or from the unguarded sides, were ruled out. It had to be a straight frontal battle.

The constraints imposed on the military compelled them to develop and employ new tactics and newer ways of employment of weapons. With no other option to evict the enemy, the Indian Army employed 25-km range Bofors howitzers to fire directly at the enemy sangars on the hilltops. That was perhaps the first instance of employing howitzers as direct-firing weapons in modern warfare anywhere in the world.

Anyway, the extreme restraint imposed by the political leadership led to the Kargil War getting dragged on. Hill after hill had to be cleared one by one, and that did take time, lives and ammunition.

The moment of glory came at 9.30 in the evening of July 9 when Pakistan's director-general of military operations, Lt-Gen. Tauqir Zia, called his Indian counterpart, Lt-Gen. N.C. Vij (who would later become Army chief), and was told to pull out from the Kaksar sector, the last piece of encroachment, before first light the next day.

The Kargil war proved to be costly, but the restraint imposed by the political leadership prevented it from escalating.

Vajpayee went to the polls as a war-winner, but took care to avoid triumphalism. Within a few weeks, his caretaker government unveiled a draft nuclear doctrine by which India declared that it won't attack a non-nuclear power, and won't be the first to use nuclear weapons in war against a nuclear power. The doctrine also spelt out a wish list for the nuclear armoury. India would have a triad of weapons—nuclear bombs delivered by bomber planes (already in possession), nuclear-tipped missiles launched from the ground (already developed) and nuclear-tipped missiles launched from nuclear-powered submarines.

The war made Vajpayee a national leader. His National Democratic Alliance won the elections of September-October 1999, though a majority still eluded the BJP. All the same, that was enough for running a stable government. Thus, after four short-lived governments (Vajpayee's own 13 days, H.D. Deve Gowda's 11 months, I.K. Gujral's 11 months and Vajpayee's own one-year terms), post-Kargil India had a government that lasted its full five-year term.

In Pakistan, the coin of democracy flipped. The country had a democratic government under Pakistan Muslim League's Nawaz Sharif when the Kargil war commenced, but as the operations progressed, it appeared that the political leadership was distancing itself from owning up the war.

It was projected that the whole Kargil operations had been planned and executed by the Pakistan Army and that the political leadership had been kept in the dark. Or that the political leadership had not been briefed fully on the scale of the Kargil operations or the likely military and diplomatic consequences. A telephone talk between the then Pakistan Army chief General Parvez Musharraf and his chief of general staff, that was secretly tapped by Indian intelligence agencies, also confirmed this view.

As operations ended in an Indian victory, the blame was put squarely on Pakistan's military leadership, particularly on Musharraf, a commando-general. The undoing of Sharif began there. His blame game is said to have led to a general fall in the morale of Pakistani Army troops and rising anger among the officer class.

The next few weeks saw Musharraf hopping from military station to military station, giving pep talks to troops and conferencing with the commanders. But Nawaz Sharif failed to read the danger signals. Sharif just seemed paralysed—either to sack his military chief or to embrace him.

And then Sharif resorted to a cowardly act. When Musharraf was returning from a visit to Sri Lanka, Sharif sacked him, and ordered that the airplane—a civil PIA passenger plane carrying hundred-odd passengers and coming in to land in Karachi—be diverted to any other country.

The airplane landed on a tarmac guarded by the troops sent by Aziz Khan and Mahmud Ahmed. They had already detained the prime minister, captured the airport and taken over the radio and television stations. Musharraf landed in Karachi and drove to take over as the country's new ruler.

There ended another of Pakistan's short-lived experiments with democracy.