The last date for withdrawal of nominations is July 11; polls will be held on July 18 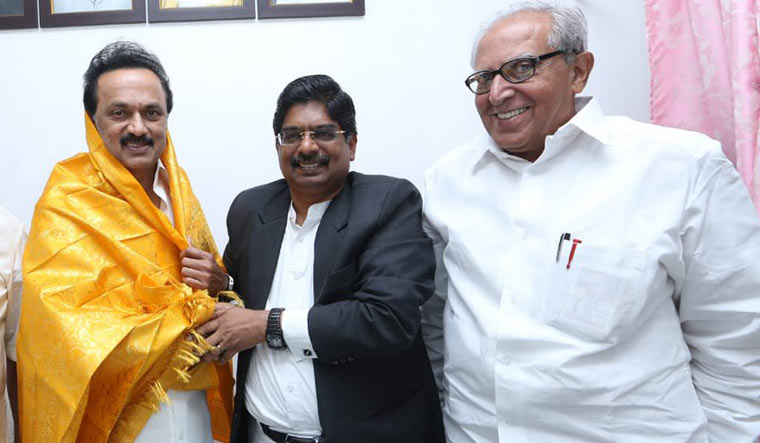 With the nomination process for six Rajya Sabha seats, which will be falling vacant, from Tamil Nadu beginning on Monday, the DMK has released its list of candidates. Former additional advocate general P. Wilson and M. Shanmugham, general secretary of the DMK's Labour Progressive Federation (LPF), are the two nominees to the Rajya Sabha. The AIADMK is still sifting hard to finalise nominees and is likely to release its final list on Wednesday.

Both the DMK and AIADMK are to send three members each, based on their respective numbers in the Assembly. As per poll agreements with alliance partners, AIADMK has to give one out of the three seats to PMK, while the DMK has given one to the MDMK.

The MDMK is likely to nominate its chief, Vaiko. Vaiko will make a re-entry into the Parliament after 15 years. He was a Lok Sabha member between 1999 to 2004. In the meantime, a high-level committee of the MDMK will be meeting on Tuesday to discuss its nominee, as there is a case pending against Vaiko in the Madras High Court.

The DMK has chosen its candidates based on high professional credentials and the need for MPs who will be articulate in the Upper House to act as the voice of the opposition. Wilson (53) has been rewarded with the Rajya Sabha nomination as a sign of gratitude for his success in arguing the 'memorial case' in favour of the party. The Madras High Court gave directions to the Tamil Nadu government to allot space near the Anna Memorial on the Marina Beach for a burial site for former DMK leader M. Karunanidhi, on August 7 last year. Wilson represented the DMK in court and won the case.

Shanmugham (77) has been the general secretary of the DMK's LPF since 2001. He has been in the forefront of all labour and trade union agitations led by the DMK. Shanmugham helped the DMK's labour arm gain entry into the Nokia manufacturing unit in Sriperumbudur near Chennai.

"I thank our leader M.K. Stalin for nominating me and Wilson. Stalin has kept the promise made by his father and our former leader Karunanidhi. He has given this opportunity for me, so that the voice of the labour force and trade unions will be heard in Parliament," said Shanmugham.

Both Thamizh Magan Hussain and Anwar Raajhaa have already sent letters to the AIADMK leadership seeking Muslim representation. Anwar Raajhaa was denied a ticket from his own Ramanathapuram constituency as he was vehemently critical of the BJP, including on the triple talaq issue.

On June 7, in a detailed letter to the AIADMK high command, Anwar Raajhaa said the party should give representation to the Muslim community as it would increase the ruling party's influence in the Tamil Nadu Waqf Board, considered a matter of prestige.

Anwar Raajhaa served as a Lok Sabha MP from 2014 to 2019 and during the tenure he also served as chairman of the Tamil Nadu Waqf Board, under the MP quota. With no Muslim representation for the AIADMK now, the DMK’s influence in the state Waqf Board has increased due to the win of IUML Ramanathapuram MP Nawas Kani, according to sources in the AIADMK.

As of now, there are 12 members in the board and the DMK and its allies have occupied close to half the strength of the Waqf Board.

The post of Waqf Board chairman is a prestigious post and every ruling party in the state has traditionally retained it. But with Anwar Raajhaa not a MP now, the post is lying vacant. Sources say the AIADMK will try to regain the chairman post by sending one of the Muslim leaders to the Rajya Sabha.

Six Rajya Sabha seats are up for polls from Tamil Nadu, and the Election Commission has announced elections on July 18. AIADMK MPs T. Rathinavel, Dr V. Maitreyan, K.R. Arjunan and R. Lakshmanan will be retiring from their six-year term on July 24 along with D. Raja of the CPI. The Rajya Sabha seat of DMK's Kanimozhi has also fallen vacant as she was elected to the Lok Sabha from the Thoothukudi parliamentary constituency in the recently-held General Elections.