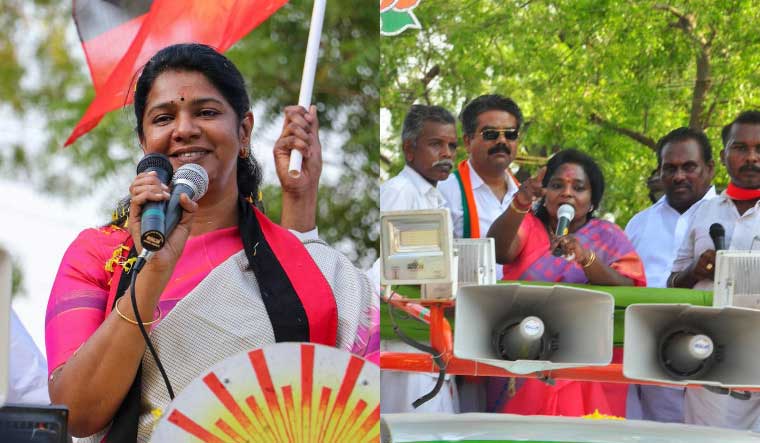 It is little past 8 in the morning on a Sunday. An eerie silence prevails in the salt city of Tamil Nadu as the summer sun is beating down hard in Thoothukudi town. The scars of the massacre in May 2018—which led to the deaths of 13 people who protested against the Sterlite copper smelter—still persist.

Sunday prayers are set to begin at the St Michael’s Church in Anna Nagar. Clad in white kurtis and sarees, a group of women, about to enter the church, wait outside with the holy bible in their hands to watch the roadshow of DMK’s Thoothukudi candidate Kanimozhi Karunanidhi.

Jessica Joseph smiles as Kanimozhi passes by, waving her hands to the people, while a speaker blares, “Vote in rising sun symbol. Kanimozhi is a learned and well-mannered candidate who will uplift Thoothukudi.” Jessica is convinced. “She is new to our place. But I will vote for her to defeat Modi. We lost lives, we lost money. All because of Modi,” tells Jessica.

Far away from the Thoothukudi town, at Megnanapuram in Udangudi, part of the Thoothukudi constituency, yet another group of women wait to receive their favourite woman. Saranya has her phone handy to get a selfie with the star candidate as BJP's Tamilisai Soundararajan alights from her SUV to seek votes “Vote for the lotus symbol,” tells Soundararajan, as Saranya shakes hands with her. “Akka, we are with you,” Saranya tells her, as other women in the village walk down to receive her. “We want Modi. Only he can save the Hindus,” tells Senthilkumar Raja.

In Thoothukudi, in the southern tip of Tamil Nadu, the fight is between Kanimozhi and Soundararajan, the two heavyweights and the two star women candidates in the state. Kanimozhi, 51, a sitting Rajya Sabha MP and daughter of late DMK leader M. Karunanidhi, and Soundararajan, 57, the state president of the BJP, are fighting their debut election.

“We started late to campaign. But now, we have cracked the castle,” says Soundararajan, who is confident of victory. The six assembly segments in Thoothukudi—Vilathikulam, Srivaikundam, Thoothukudi, Ottapidaram, Thiruchendur and Kovilpatti—are unique when it comes to the voters’ profile. “I am confident of a victory. People are for Modi. They want NaMo to come back,” tells Soundararajan. Meanwhile, Kanimozhi, too, is confident of victory as, “there is an anti-Modi wave in Tamil Nadu,” she says.

However, more trouble awaits Soundararajan, as the Sterlite killings in 2018 and the action taken against a native of Thoothukudi, Sophia, for her anti-Modi comments have turned into a black mark for the BJP candidate.

“Sterlite is an issue only in Thoothukudi. It is sub-judice to talk about Sterlite and the closure of the copper smelter factory now, as it is pending in court. People want Modi to come back to power. They do not talk about Sterlite. Only the media is asking about this,” claims Soundararajan. The advantage, the BJP-AIADMK combine feels is the consolidation of the Hindu votes in this constituency, which has the maximum number of Nadar community voters. Considered one of the major trading communities in the state, the BJP feels that Soundararajan can easily poll the Nadar votes as she hails from the same community.

Apart from this, Thoothukudi is also dealing with the issue of conversion. “The BJP has created a base on Hindu solidarity,” tells Meenakshi Sundaram, a trader at Veerapandianpattinam village. He says many villages have also put up boards at the village entrance, saying, “no conversion.”

“This is how the BJP found its foot in Kanyakumari after the Mandaikadu attacks. Now, Thoothukudi is polarised. I do not know whom to vote for. No one is good. But I do not want Modi as I have lost my business because of GST,” tells Meenakshi Sundaram.

But Soundararajan seems to have pulled strong support in most parts of the constituency as Hindutva stands out. “We are Hindus. We should feel safe being in our country. Tamilisai is likely to win,” tells Murugaiyyan, a tender coconut seller at Thiruchendur town.

While the Sterlite killings are an emotional issue in Thoothukudi town, the people in the other five assembly segments do not even talk about the Sterlite killings. Religion, caste and community stand out in at least three of the assembly segments. In Srivaikundam, Vilathikulam and Thiruchendur, where the upper caste Nadar votes are a determining factor, the support for Soundararajan is evident. In Thoothukudi town, Thiruchendur, and in parts of Kovilpatti, Kanimozhi commands an upper hand.

The DMK has garnered huge support, as the minorities in this region and the business community are looking for change. Even before the elections were announced, as a Rajya Sabha MP, Kanimozhi allotted around Rs 1.65 crore for various welfare projects in the constituency from her MP local area development fund. In addition, her work at the village called Srivenkatesapuram hamlet, near Nazareth in Thoothukudi constituency, under the Sansad Adarsh Gram Yojana (SAGY), is likely to give an edge for Kanimozhi.

On the other hand, the candidature of Bhuvaneswaran, who is fighting on a ticket from T.T.V. Dhinkaran’s AMMK, is likely to eat into the AIADMK votes in the constituency and also capture the ‘anti-BJP’ votes. Meanwhile, T.P.S. Ponkumaran, Kamal Hassan’s Makkal Needhi Maiam candidate, is also a strong contender to capture ‘anti-BJP’ votes.