'No luxury apartment for me': Is Subramanian Swamy upset with BJP? 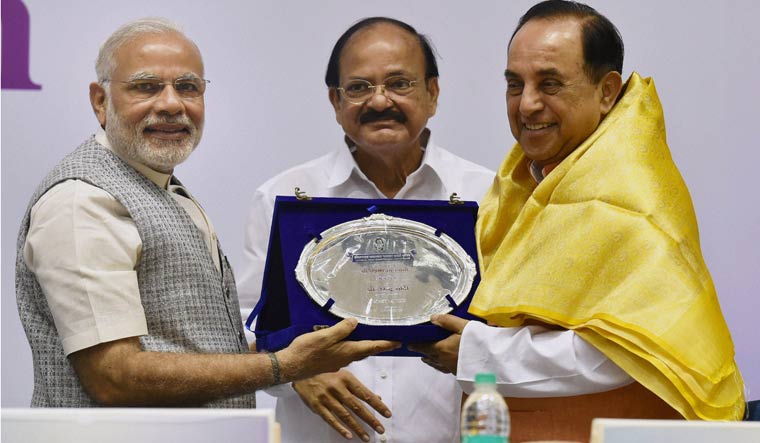 Subramanian Swamy has stayed in the headlines ever since his entry to the BJP in 2013, thanks to his pursuit of corruption cases targeting the Congress and penchant for controversial utterances.

From frequently targeting Finance Minister Arun Jaitley over policy decisions to openly calling on Prime Minister Narendra Modi to acquire land for the construction of a grand Ram temple, Swamy has arguably flouted the BJP's 'line' on many controversial issues.

May be instead of Chowkidar I should affix Mazdoor because I construct a multi-storied building for the party by fighting all these cases but do not get a luxury apartment to live in it. Lord Krishna explained why to Arjuna after the war

However, on Tuesday, Swamy posted a cryptic tweet that appeared to suggest his work for the BJP had not been recognised. Since Modi won his first term as prime minister in 2014, Swamy has frequently spoken about his interest in the post of finance minister.

On Wednesday, Swamy tweeted, “May be instead of Chowkidar I should affix Mazdoor because I construct a multi-storied building for the party by fighting all these cases but do not get a luxury apartment to live in it. Lord Krishna explained why to Arjuna after the war.”

Swamy was conspicuous as the only 'high-visibility' BJP leader to not adopt the 'chowkidar' prefix on his Twitter handle, despite Modi promoting the 'Main Bhi Chowkidar' campaign. In fact, Swamy attracted controversy in March after a news clip surfaced of him saying he couldn't use the word chowkidar with his name as he was a Brahmin.

While it is yet unclear in what context Swamy is talking about Lord Krishna and Arjuna in the tweet, it may be to highlight his dedication to “duty” towards the BJP, irrespective of results. The long discourse between Krishna and Arjuna, during the Mahabharat, refers extensively to the importance to doing one's duty, without concern for the fruits of the effort.

In recent years, Swamy had filed PILs in cases involving senior Congress leaders like Sonia Gandhi and Rahul Gandhi, such as the National Herald case. Swamy had also filed complaints to the Supreme Court and home ministry that Rahul was a British national and had a fake degree from Cambridge.

Previously, Swamy had doggedly pursued the 2G scam and AgustaWestland case, both of which created considerable negative publicity for the Congress-led UPA government.

However, the only recognition Swamy seemingly got from the BJP in recent years is a Rajya Sabha ticket.