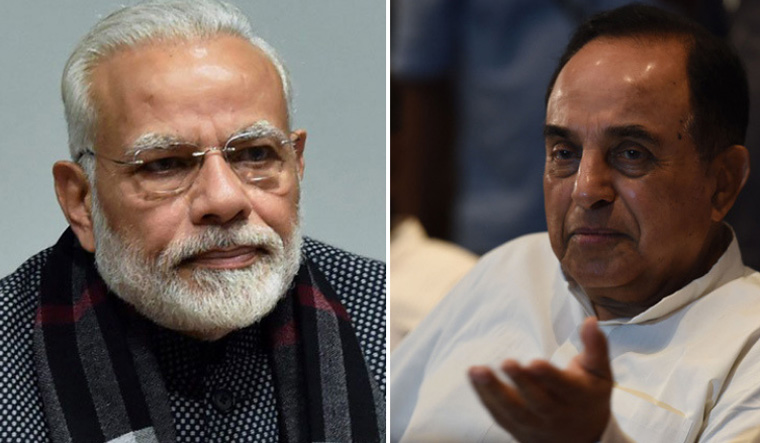 BJP leader Subramanian Swamy has been one of those politicians who has, time and again, pressed for the need to build a Ram Temple at the disputed site in Ayodhya. Emphasising that it was high time the Narendra Modi-government acted on the issue, Swamy on Monday hinted that the BJP should act as per the "affidavit" of former prime minister P.V. Narasimha Rao. Swamy appeared to be referring to the ordinance that then Congress government under Rao had brought in 1993 to settle the dispute between the two parties in the case.

"The Americans have a saying: "if an irresistable [sic] force meets an immovable object something got to give. If the Hindutva irresistable force meet the immovable Supreme Court object on Ram Temple, the Namo govt must give—action as per PVN Rao's affidavit," Swamy tweeted.

In January 1993, just one month after the demolition of Babri Masjid, then president Shankar Dayal Sharma had promulgated the Acquisition of Certain Area at Ayodhya Ordinance. A bill was later introduced in Parliament by then Union home minister S.B. Chavan, which was passed and came to be known as the Ayodhya Act. According to the act, the Central government acquired 60.70 acre land surrounding the disputed site and planned to build "a Ram Temple and a mosque".

The BJP had then opposed the Ayodhya Act terming it "partisan, petty and perverse". However, 16 years later, in September 2010, the Allahabad High Court would go on to give a similar verdict and declared a three-way division of the land between the Sunni Waqf Board, the Nirmohi Akhara and the guardian of the deity “Ram Lalla.”

Swamy also added that he became a party to the Ayodhya case on the request of VHP supremo Ashok Singhal and Swami Dayananda Saraswati, and made it clear that "the BJP, as a party, has not asked him to represent it in the case". "BJP as party has not asked me to represent it but will be the beneficiary of my efforts (2/2)," Swamy tweeted.

This fact on the cases before the SC mean that BJP or Govt is nowhere a party in the case before SC presently. I have made in my WP the Union of India and UP State as respondents. I entered the case when Ashok Singh and Swami Dayananda Saraswati asked me to take up the (1/2)

Despite being the ruling party both at the Centre and in Uttar Pradesh where Ayodhya is located, the BJP has been unable to find a solution to the dispute. Undoubtedly, Ayodhya will become one of the main issues in the upcoming general elections of 2019. The Supreme Court had in October deferred the hearing in the case to January 2019.

In November, Prime Minister Narendra Modi had blamed the Congress for stalling the construction of Ram Mandir at Ayodhya.