Brand and The Hand 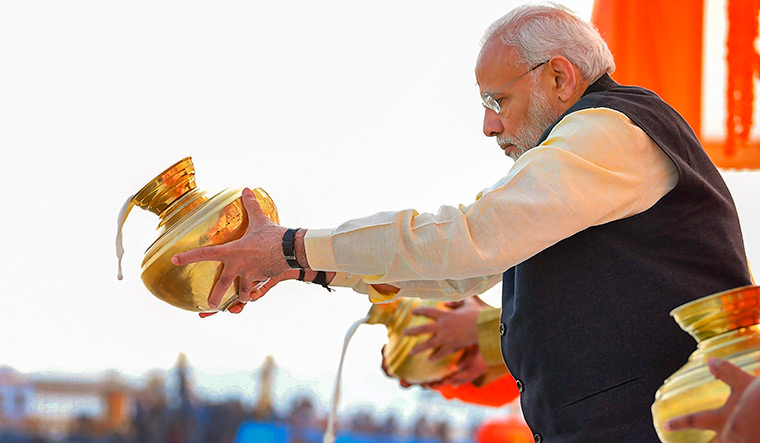 Prime Minister Narendra Modi has a reputation of swinging many electoral contests his way with his high-voltage campaigns and oratory skills. When the going got tough for the BJP ahead of the 2017 Gujarat assembly elections, Modi swooped in and tilted the scales in his party’s favour with a flurry of public meetings. He played the son of the soil to the hilt and accused Congress leaders of being in cahoots with Pakistan to defeat him.

That version of Modi, however, was seen a lot less as the party campaigned for the assembly elections held this November-December, particularly in the Hindi heartland states of Madhya Pradesh, Chhattisgarh and Rajasthan. Earlier, Modi’s critics would remind him that he was now prime minister and should not treat every state election as his own. But he campaigned far less this time, and even his absence from publicity material was conspicuous.

There was another major difference—the BJP strongman was no longer setting the agenda. Even as the BJP’s effort was to keep the focus away from Modi, he was compelled to react in his election speeches to the barbs thrown at him by Congress president Rahul Gandhi with regard to his promises of achhe din, and the allegations of corruption in the Rafale deal and crony capitalism.

Modi’s reticence may well have been a sign of the BJP’s fears of facing electoral reverses in the Hindi heartland. Those fears came true when the three states voted out the BJP. The verdict, months ahead of the 2019 Lok Sabha elections, has thrown the field open for the big electoral fight. A clear signal coming out of the results is that the Congress, though still a weak force, is up for the battle, and Modi no longer looks unbeatable. Brand Modi has lost its sheen because of the continuing aftereffects of demonetisation and a ‘faulty’ implementation of the Goods and Services Tax.

If Modi’s involvement in these elections was muted, Rahul led his party’s charge, attacking the prime minister relentlessly on issues of agrarian crisis, unemployment and corruption. The Congress president has been chipping away at Modi’s image of a strong, decisive leader who is committed to rooting out corruption. Even without the backing of other opposition leaders, Rahul has repeatedly slammed Modi for the Rafale deal.

After a series of defeats since it was embarrassingly reduced to 44 seats in the Lok Sabha in 2014, the Congress has at long last received a glimpse of achhe din with victories in crucial states. The Congress had breached BJP’s fortress of central India; the saffron party had been in power in Madhya Pradesh and Chhattisgarh for 15 years. The BJP coined the ‘Congress-mukt Bharat’ slogan following their landslide victory in 2014, but the Congress has shown that it still has the gumption and capacity to engage the BJP in a big fight. It would now want to build on the triumph in the run-up to the general elections. 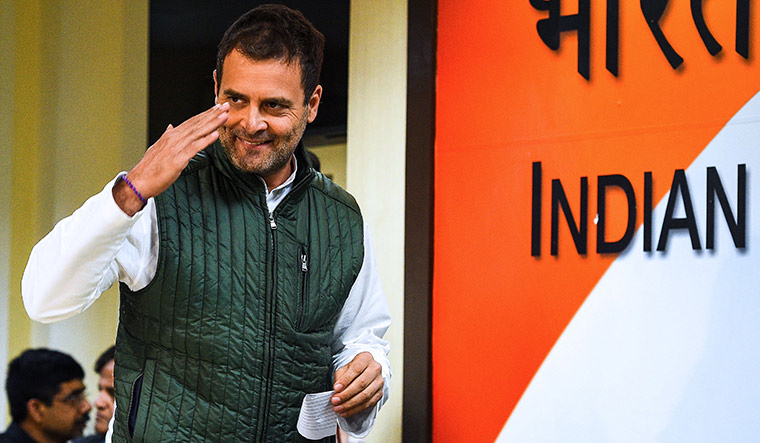 Man on a mission: Rahul Gandhi has relentlessly attacked the prime minister on issues of agrarian crisis, unemployment and corruption | AFP

The Congress believes that it has zeroed in on a narrative for 2019. The idea is to hold Modi accountable for the promises he made that propelled his party to power in 2014. Rahul has often questioned Modi’s promise of generating two crore jobs a year. The party’s assessment is that agrarian crisis and joblessness are two sides of the same coin. In its analysis, the Patidar agitation in Gujarat for reservation in jobs was fuelled by the landed community’s failure to make decent earnings out of farming.

When it comes to retaining power, the BJP’s track record has not been too good. The party had survived a scare in Gujarat, a saffron bastion, where the Congress put up a stiff fight in the 2017 state polls. This year, though the BJP ended up as the single largest party in the Karnataka assembly elections, it was outsmarted by the Congress that moved swiftly to cobble up numbers by allying with the Janata Dal (Secular) to form the government.

The recent triumphs have improved Rahul’s profile in the opposition conglomerate, as efforts are on to form an anti-Modi front. But prominent regional players such as Samajwadi Party president Akhilesh Yadav, Bahujan Samaj Party president Mayawati and Trinamool Congress chief Mamata Banerjee are uncomfortable with the Congress acting as the leader of the group. The SP and the BSP opted out of a meeting of 21 opposition parties held on the eve of the election results. Some regional leaders even prefer dealing with former Congress president Sonia Gandhi on matters of alliance.

The unease among ambitious regional leaders with accepting Rahul as the pivot of the opposition alliance was evident at a meeting where DMK president M.K. Stalin proposed Rahul’s name as the opposition’s prime ministerial candidate. That the choice of prime minister needed to be dealt with only after the elections resonated throughout the anti-Modi camp. Even as the Congress is desirous of playing the lead role in forging opposition unity, Rahul has exercised caution by stating that the prime minister would be decided only after the results of the Lok Sabha elections are declared. While parties such as the DMK, the Nationalist Congress Party and the Rashtriya Janata Dal would not mind projecting Rahul as prime minister, major players such as the SP, the BSP and the Trinamool are expected to strongly oppose it.

Regional parties also want the Congress to share more seats in the states that it is strong in, if it wants to win electorally crucial states like Uttar Pradesh. The Congress worries that certain partnerships could prove detrimental, similar to what happened in Telangana. An alliance with the Telugu Desam Party is believed to have driven away voters in the new state, who still see the Andhra party’s chief, Chandrababu Naidu, as an anti-Telangana figure. Congress leaders have said that in the recently concluded elections, the BSP wanted seats where it stood no chance of winning. There was also the fear, especially in Madhya Pradesh, that allying with Mayawati would have made upper caste voters wary of the Congress. But with victories against the BJP under his belt, Rahul can now bargain with these parties from a position of strength as he endeavours to form state-specific alliances. 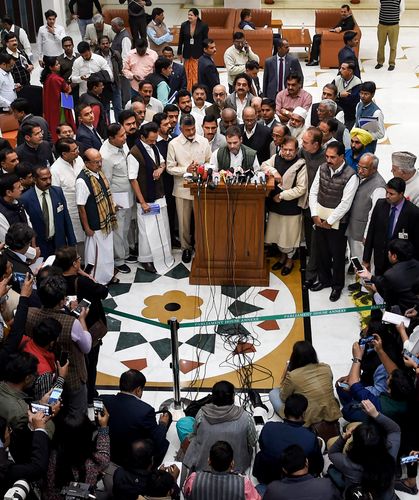 Divided they stand: There is unease among ambitious leaders of regional parties with accepting Rahul Gandhi as the pivot of the anti-BJP alliance | PTI

The prediction in this opposition camp is that the BJP is expected to lose at least a hundred Lok Sabha seats in the Hindi heartland. They expect the BJP to underperform in Uttar Pradesh, Bihar and Jharkhand, where it had won 116 out of the 134 seats in 2014. And if a grand alliance, aka Mahagathbandhan, is formed in these states, the BJP is likely to shed a large chunk of its tally. This would be in addition to what the BJP could lose in other important states like Rajasthan, Madhya Pradesh, Chhattisgarh, Maharashtra, Haryana, Delhi and Gujarat.

Meanwhile, the victory of the Telangana Rashtra Samiti brings into focus the importance of parties such as the Biju Janata Dal, the YSR Congress and the AIADMK, which are non-aligned but are inclined towards the BJP-led National Democratic Alliance. These regional parties could prove crucial for the BJP in 2019, if it falls short of securing a majority.

The Congress may appear to be on the comeback trail and its morale may be high, but the BJP continues to be a formidable force. The contest in Madhya Pradesh went down to the wire; the BJP ended up with a larger vote share than the Congress, but fell short by a few seats. This showed that while there was dissatisfaction with the BJP, there was no overwhelming support for the Congress. In Rajasthan, a state that has alternated between the two parties every five years, the margin of victory was not as big as the Congress would have liked it to be. It is possible that the BJP continues to have a substantial support base, and can still manage to win enough Lok Sabha seats in these states. The bigger message from the close contests—and it can be applied to the broader national picture—is that though voters could be upset with the BJP, they might still not be open to an alternative.

With the spotlight on the incumbent chief ministers and on the anti-incumbency against the party’s sitting MLAs, the BJP insulated Brand Modi from these defeats. His party believes that Modi continues to be popular among many sections, even if some of the original charm has worn off.

The BJP has to heed the warning it has received. It has to realise that the people are unhappy with unfulfilled promises. The party has tried to play up the government’s initiatives in areas such as roadways, power supply, subsidised gas cylinders and construction of toilets. However, listing out the achievements may not always work. It is time for the party to go back to the drawing board.

Five years ago, Modi’s prime ministerial campaign was based on vikas, and it was silent on hindutva issues. With people doubting how much of the promised vikas has been achieved, there is speculation whether the BJP and its right-wing associates would ramp up the hindutva temper. The saffron brigade is expected to intensify its campaign for the construction of Ram Mandir in Ayodhya, the original issue which contributed to the BJP’s growth. However, so far, the BJP has been noncommittal on the issue of constructing the temple, even as there is a growing demand from the extended parivar for a legal remedy to allow for building the temple. Restive ally Shiv Sena seems to be making more noise on the issue, perhaps to add to the BJP’s unease, even as ruling party leaders talk about the matter being sub judice.

The party might want to take into account the drubbing it received in areas where Uttar Pradesh Chief Minister Yogi Adityanath, a hindutva icon, had campaigned in the recent round of elections. Moreover, the minister for the recently created cow protection ministry in Rajasthan lost the election. There is a need to assess if pressing the mandir button might end up backfiring on the BJP, as voters could look at it as a diversionary tactic meant to take the attention away from the government’s failures.

With Modi no longer looking invincible, the Congress getting back in the game and regional players marking their turfs, the 2019 Lok Sabha elections promise to be a riveting contest.