Godse was, is and would remain a patriot, says Pragya Thakur 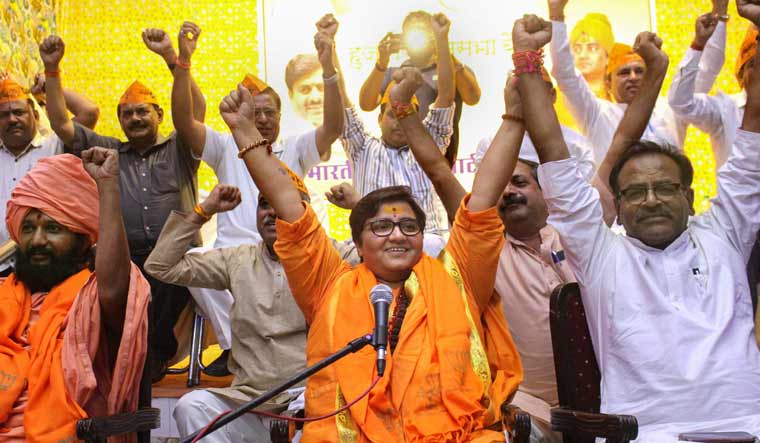 Malegaon blast-accused and BJP candidate from Bhopal, Pragya Thakur, continues to stir controversy despite polling in her constituency getting over on May 12. On Thursday, Thakur stirred a hornet’s nest when she said Mahatma Gandhi's assasin "Nathuram Godse was, is and would remain a patriot".

While the Congress has aggressively snapped at the BJP candidate’s remark and asked whether the party agreed to her words, the BJP has tried to shrug it off as her "personal" remark.

Thakur’s remark came as a reply to a question posed by local media persons during a roadshow in Agar Malwa under Madhya Pradesh's Dewas Lok Sabha constituency, which will go to polls in the last phase on May 19. She was conducting the roadshow in support of BJP candidate Mahendra Singh Solanki who resigned from the post of civil judge to contest the polls.

A video circulating on social media showed a local media personnel asking Pragya Thakur her reaction on actor-turned-politician Kamal Haasan’s statement about Nathuram Godse being a "terrorist". She replied, "Nathuram Godse deshbhakt they, hai aur rahenge" (Nathuram Godse was, is and would remain a patriot).

She then added that those making the allegations (against Godse) should look within themselves. They would be given an apt reply in the current polls, Pragya said. When asked if she was supporting Godse, Pragya can be seen impatiently pushing the reporter's microphone away.

Congress attacked Thakur’s statement vehemently with party spokesman K.K. Mishra retorting that "Pragya was, is and would be a terrorist and a murderer, and the BJP should make it clear whether it supported her statement on Godse".

Mishra added that the unfortunate statement on the ‘first political terrorist’ (Godse) was coming from a person who herself is accused of terror and murder. “She is an accused in the Malegaon case, and in the Sunil Joshi murder case (of Dewas), the court had made it clear that she was being acquitted due to failure of the local police and NIA to produce proper evidence in the case,” Mishra said, while talking to THE WEEK.

BJP chief spokesperson Deepak Vijayvargiya said Mahatma Gandhi's killing was a criminal act and no person can support it. “While it is improper to make personal comments on anyone (Godse) without knowing fully about their lives, this statement (by Pragya) is her personal view.” He, however, added the party has not sought any clarification from her in this regard according to information available to him.

Interestingly, the BJP state unit had reportedly asked Pragya to "go slow" till the elections were over and she had limited her interactions with the media following the Bhopal polls on May 12. She was also not made part of the campaign in the eight constituencies where voting would be held on May 19.

However, her personal equations with Dewas BJP candidate Solanki led her to start a campaign for him from Wednesday, sources said.