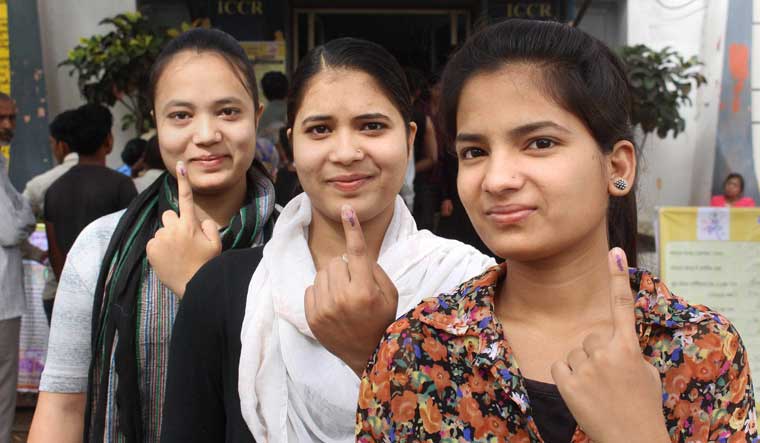 First time voters show their finger marked with indelible ink after casting vote at a polling station during the sixth phase of the 2019 Lok Sabha elections, in Bhopal, on Sunday | PTI

The battleground of the one of the most watched-out electoral contest in the country, Bhopal, recorded a historical high voter turnout on Sunday at 65.69 per cent.

But the increase in voting has only added to the speculations over who might win, what is being considered as, the tightly fought contest between the Congress’s Digivijaya Singh and the Bharatiya Janata Party’s Pragya Singh Thakur.

Eight seats in Madhya Pradesh went to polls on Sunday, with an average turnout of 65.11 per cent. The turnout is likely get an upward revision by Tuesday night. Bhopal that normally votes quite below the average voting in the state, has voted quite well this time.

Voter turnout increased by 7.9 per cent over the 57.79 per cent recorded in 2014 polls that saw the BJP candidate Alok Sanjar win by over 3.7 lakh margin under a Modi wave. The 2014 figure was a whopping 13.10 per cent rise over 2009 polls and the result made the trend clear.

However, the increase in voter turnout this time is more modest but it is keeping candidates as well as voters of both the parties on tenterhooks. Both Digvijaya and Pragya made customary claims of comfortable win in the polls after voting on Sunday evening. 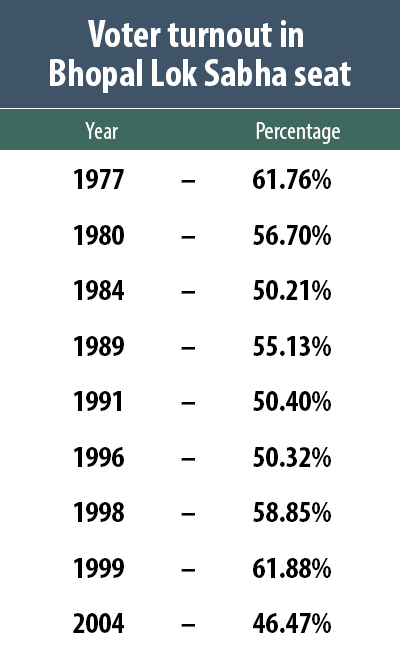 But political observers are keeping their cards close to their chest, saying that only micro-level analysis could bring out as to who the high turnout might benefit.

“Increase in voter turnout is a routine matter these days. So just on the basis of higher turnout, it is not possible to say where the voter is swinging. The seat is a BJP bastion for 30 years and Digvijaya is a big name, so it remains to be seen how Bhopal decides this time,” political analyst Girija Shanker told THE WEEK.

Senior journalist Manish Dixit pointed out that one of the most interesting factors to watch out for is the considerably higher turnout in the rural assembly constituencies of Berasia and Sehore that recorded 76.13 per cent and 77.01 per cent (highest) polling, respectively. This is quite high when compared to some typical urban constituencies like Bhopal South-West and Govindpura that recorded only 59.41 per cent and 59.86 per cent voting, respectively.

Interestingly, among these four highs and lows, three assembly seats, except for Bhopal South-West, are held by the BJP. Normally, urban votes are considered to be favouring the BJP more than the rural votes.

The two Muslim dominated seats of Bhopal North and Bhopal Central also behaved differently, recording turnouts of 66.77 per cent and 59.26 per cent (lowest) respectively, adding further to the confusing trend.

So even at this juncture when the polling is over in Bhopal, speculations are running riot in the capital of Madhya Pradesh.