The farmer, as he was widely identified, committed suicide at an AAP rally 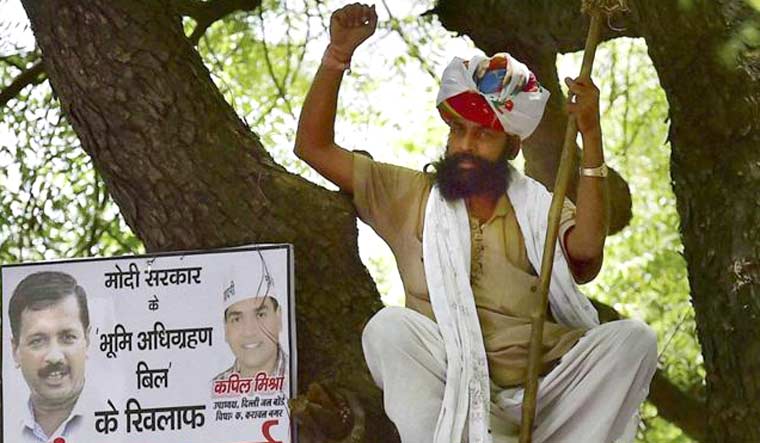 These are three terms that Gajendra Singh Kalyanwat is described as in the Wikipedia article on his life. These are not normally terms you associate with a person living in desperate times. But they nonetheless accurately describe a man whose life ended tragically four years ago on this day, better known as the farmer who committed suicide at an Aam Aadmi Party rally.

If any image reflects the dissonance between politicians and voters, it was the one of Gajendra Singh hanging to death on his gamcha while politicians promised change at a farmer’s rally in front of his dead body. Arvind Kejriwal, who arrived at the venue shortly before Gajendra, continued his speech even after the latter was taken down from the tree and rushed to the hospital by AAP volunteers—a move he later apologised for.

The event made headlines for a while. Chief ministers issued condolences and various parties played politics with it. In Gajendra’s home district of Rausa, a helipad was built to accommodate Amit Shah’s consolatory visit. On television, AAP leader Ashutosh broke down after speaking to Gajendra’s bereaved daughter.

Years passed—several eternities in politics—and Gajendra’s death stopped making news. In 2017, the High Court disposed of a 2015 petition that had blocked the Delhi government from awarding a Rs 1 crore compensation to Gajendra’s kin, on the grounds that he could not be considered a martyr. The court, two years later, struck down this petition after pointing out that there exists no legal definition of what constitutes a martyr in the first place.

At jaipurisaffe.com, the farmer/businessman can be seen tying colourful turbans on to politicians like Rajnath Singh, as well as on cricketers like Ashish Nehra. Gajendra was well-known for his pagdi-tying skills, even winning awards for it. The Times of India reported that he had even tied one on Bill Clinton back in 2000—a high-profile event that shot his popularity up in the state.

Given Gajendra was a businessman, landowner, and by all reports, well-off. His sister reported that he “wasn’t distressed at all”, preparing flower saplings at his home on the very day that he died. His last-known failure was the denial of a party ticket by the Samajwadi Party, of whom he was a member until 2008.

What explains his suicide?

The Hindustan Times cited the police report as stating that Gajendra was drunk at the time. In this narrative, the farmer/politician was making a point in the name of distressed farmers, threatening to hang himself without really meaning to—facing calamity when his foot slipped and the knot tightened as he fell. The police had earlier blamed the crowd for “instigating” Gajendra. It prompted many to ask whether this was a political stunt gone wrong.

Another source would be Gajendra’s own suicide note. Thrown at the crowd shortly before his death, the note comprised nine lines in Hindi. In it, Gajendra describes himself as a poor “son of a farmer” who had been thrown out of his house after a failed crop. He says that he has no money to support his three children, and appeals for help to travel back home. The note poignantly ends with Lal Bahadur Shastri’s famous slogan, “Jai Jawan, Jai Kisan”, ringing emptily and ironically as the concluding sentence in a suicide note.

Bitter irony seems to have defined Gajendra’s suicide. In the video of his last moments, he can be seen facing the crowd with his palms together in the “Namaskara” or “Anjali Mudra” gesture. Normally associated with prayer, in practice, it is often used ironically. Was Gajendra’s final act an ironic appeal for help to a public and politic who he knew could never help?

In a cruel irony, the facts on farmer suicides since 2014 are as muddy as the facts on Gajendra’s own death. Despite news reports of over one farmer’s death a day nationwide between 2015-17, the National Crime Records Bureau has not published its annual Accidental Deaths and Suicides Report since 2015. The only available data has been a response to a Lok Sabha question, where a minister attached “provisional” data from the NCRB which reports 11,307 cumulative farming sector deaths in 2016.

If we want to understand why farmers kill themselves, we need to look beyond the surface. In the last four years, farmers struggled with dropping prices, rising debt, demonetisation, and climate change. They struggled constantly to bring their issues on to the national stage, marching to Delhi carrying the skulls of their dead peers. Do their voices get heard enough?

A 2019 publication in the Journal of Neurosciences in Rural Practice, titled “Depression, Suicidal Ideation, and Resilience among Rural Farmers”, finds that while over 90 per cent of farmers sampled showed depressive symptoms, the causes were far more socioeconomic and local. It attributed farmers suicides to “a nexus of inter-related causes” including poor finances, excessive debt, crop failure, alcohol use, and an imitation phenomenon where farmers were more likely to commit suicide in areas where other farmers had killed themselves in their vicinity.

There is no single, uncomplicated answer to the issue of farmer suicides. There is only the certainty that something is wrong in the state of Indian agriculture. Whatever it is, it does not seem to have changed by much in the four years since Gajendra Singh killed himself. What does this say about the state of Indian democracy, where 70 per cent of rural households depend on agriculture for a living?

India’s future will be sowed in her fields. Whether this future will be green or bloodied will depend entirely on the degree of understanding that takes place between politicians and farmers. If one cannot hear the other, then what hope lies for the kisan?