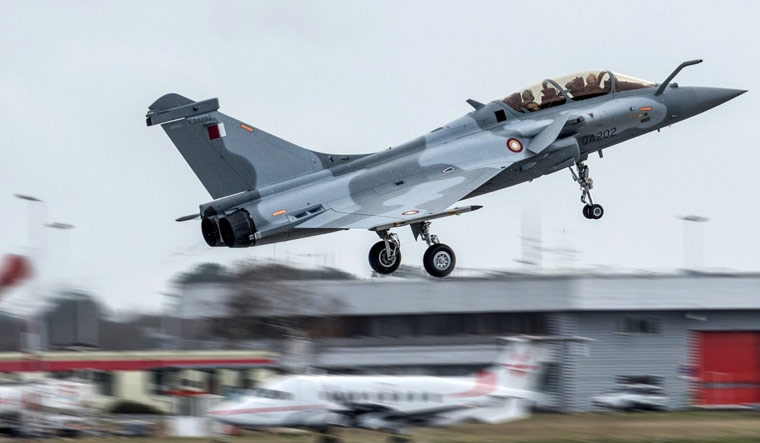 Indians woke up on Thursday to see fresh uproar on social media over the Rafale fighter deal, triggered by a seemingly 'minor' detail in a two-month-old news report.

The snippet was purportedly displayed on a Pakistani defence website on Wednesday and was promptly picked up by journalists and other social media users in India. (The French ambassador to India tweeted on Thursday afternoon that the report was "fake news".)

First Rafale Handed Over to Qatar .... And the will be flown by pakistani pilots #modi wanted to keep the #Rafale a top secret and #Qatar buys #Rafale at 1/3 of indian price
India probably getting a gold studded cockpit so the cost increased https://t.co/nov3pjQVl1

Taking to Twitter, Jitendra Awhad of the Nationalist Congress Party (NCP) taunted Prime Minister Narendra Modi over his government keeping the Rafale contract price a “top secret” even as Pakistani pilots were flying the aircraft for Qatar.

Not surprisingly, the uproar will lead to scrutiny over the likely impact for the Indian Air Force over Pakistani pilots getting knowledge about the Rafale from Qatar.

This is significant as the Qatar Emiri Air Force has ordered many of the same weapons the Indian Air Force has. Qatar signed a deal for 24 Rafale fighters and associated weaponry and training, worth approximately $7 billion, in May 2015. An additional 12 jets were ordered in December 2017.

Air Recognition, part of a group of websites based in Belgium, reported in 2015 that the weapons for Qatar's Rafale jets would include 140 Scalp cruise missiles, 300 MICA medium-range air-to-air missiles and 160 Meteor long-range missiles. All three weapon types have been ordered by the Indian Air Force.

One of the main arguments used by the Narendra Modi government against releasing pricing and technical details about the Rafale deal has been the purported need to protect the fighter's capabilities, including 13 'India-specific' enhancements. While the claim that Pakistani pilots are flying Qatar's Rafale fighters is likely to lead to questions, history shows this kind of partnership is hardly surprising.

Pakistan has had very close relationships with the oil-rich sheikhdoms of the Gulf for decades. Gulf states such as Saudi Arabia, Qatar and Bahrain have all hosted Pakistani military personnel.

The Express Tribune, a Pakistani publication, reported that 627 Pakistani personnel, including 462 from the Pakistan Navy and Air Force, were deployed in Qatar in February that year. The report added nearly 300 additional personnel could be deployed to Qatar for “training and advisory” roles.

In 2017, it was reported the Qatari government had requested Pakistani military assistance for security preparations for the 2022 FIFA World Cup.

It's not just European-origin weaponry that Pakistan has indirect access to. The Indian Air Force's current mainstay fighter is a version of the Su-30 supplied by Russia and fitted with Indian and foreign enhancements. However, Pakistan's main strategic ally, China, also operates over 200 fighters that are based on the Su-27 and Su-30. This includes at least 24 Su-35 jets, which features a more advanced radar and engine than the Indian Air Force's Su-30MKI.

In September 2017, media agencies reported that a senior Pakistan Air Force officer had flown in a Chinese J-11B fighter. The J-11B, an indigenously built variant of the Su-27, participated in an exercise involving the air forces of Pakistan and China.

Foreign pilots getting access to a fighter—as in case of Pakistani personnel training on Qatar's Rafales—will get to understand its aerodynamic characteristics, electronics and capabilities of weapons. These may include factors like the range and capabilities of the radar, acceleration of the fighter and its 'turn rates', which would be decisive in gaining an edge in close combat and its visual and radar signatures. Such information is used by adversaries to modify their training and countermeasures capabilities and also develop new tactics.

However, many countries use customised communication and electronic warfare systems to ensure capabilities adversaries are unaware of, in addition to fitting indigenous weapons. THE WEEK reported in November 2017 the Indian Air Force has sought “radar enhancements that will provide better long-range capability” for its Rafale jets.

Geopolitical compulsions will ensure Pakistan remains a close ally to the Gulf sheikdoms, which will also give it access to modern weapons, many of which are being considered by India. For India, this necessitates a commitment to furthering indigenisation and maintaining superior training practices.