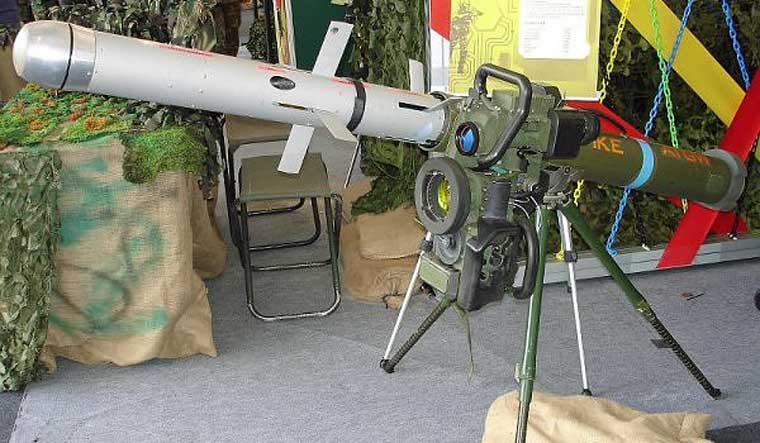 This procurement by the Army has now raised eyebrows in the ministry of defence. Indian Army's original deal to procure over 8,000 Spike ATGM could not go through because the missile failed on certain parameters during trials. After hard negotiations for over two years, the ministry of defence had to cancel the deal in January last year, a week before Israeli Prime Minister Benjamin Netanyahu was scheduled to arrive in New Delhi.

In 2006, the Indian Army initiated the process to procure the fourth generation anti-tank guided missiles to meet the 60 per cent shortage of its 'authorised holding' and to replace the obsolete Milan-2T and Konkurs missile systems that lacked night fighting capabilities.

But now, the Army is procuring Spike missiles under the 'emergency procurement' category through the enhanced financial powers delegated to the vice chief of the Army. The government in November 2018 had increased the financial powers of vice chiefs of three services from Rs 100 crore to Rs 500 crore to meet urgent requirements. All those procurements approved in this category do not need approval from the Defence Acquisition Council, the highest body to approve procurement headed by the minister of defence.

However, the Army headquarters refused to comment on THE WEEK's query on selection of Spike missile which was cancelled by the ministry of defence on multiple grounds.

In 2014, the Defence Acquisition Council, chaired by the then defence minister Arun Jaitley, cleared the purchase of 8,000 Spike missiles and over 300 launchers, and transfer of technology from Israel to Bharat Dynamics Limited (BDL).

Insider sources claim that the sensor of the missile was not effective and could not pick up the target in Indian deserts, and that the missile failed during its trials carried out in Pokhran field and range.

The Cost Negotiation Committee held series of discussions between March 2015 and June 2016. Then the matter was sent to the competent financial authority in October 2016.

But the then defence minister Manohar Parrikar was not fully convinced with the deal and ordered an expert committee to look into the matter in February 2017. Officials from the Army's infantry directorate and mechanised forces and the Defence Research and Development Organisation were the members of the expert committee. The committee had several reservations about the deal and observed that the transfer of technology is not required as the DRDO was developing man portable anti-tank guided missiles, which were under user trials. Later on, the ministry cancelled the Spike deal.

Another reason for cancelling the deal was that the importing of the Spike missiles would adversely affect the indigenous weapons manufacturing system by the DRDO. The DRDO has completed the trials of its man-portable anti-tank guided missile and will be going ahead with the production of the missile once the Army gives order.

It is notable that the intelligence agencies are closely monitoring the business dealings of the defence industries. Rafael Advanced Defence System Limited, the manufacturer of Spike missiles, has a tie up with Gurgaon-based firm, Defsys Solutions Private Limited, for the manufacture of Electro Optical Pods for the Indian Air Force. Incidentally, one of the promoters of Defsys Solutions, Sushen Mohan Gupta, was arrested by the Enforcement Directorate last month in connection with the AgustaWestland VVIP chopper deal case. Gupta's arrest was made on the basis of disclosures by another accused, Rajiv Saxena, who was recently deported from the United Arab Emirates.

The ED suspects that Sushen Mohan Gupta, an alleged defence agent, was instrumental in routing of funds through several overseas and domestic companies during the VVIP chopper deal. Intelligence sources claim that Arvind Khanna, one of the original promoters of the Defsys Solutions, also came under scanner for multiple defence deals. Khanna's father, Vipin Khanna, has been booked by the CBI in the $209 million Embraer aircraft deal.