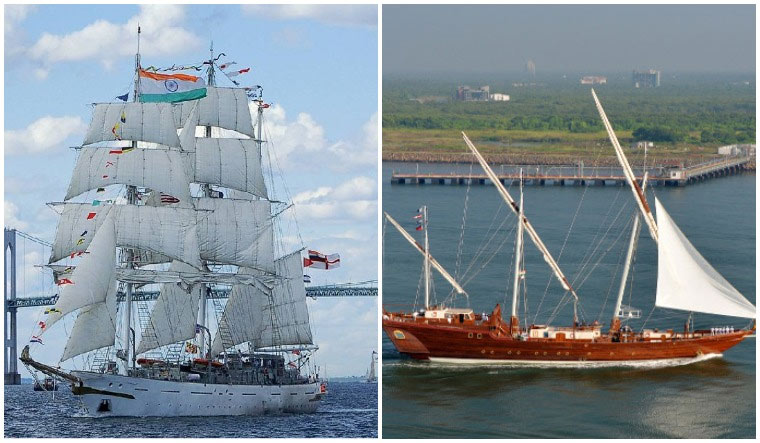 Two Indian Navy tall ships, the INS Tarangini and the INS Sudarshini, are set to sail with an Omani yacht in a unique ‘tall ship sail-together’ from Kochi to Muscat on Wednesday. The event is being organised as part of the 10th anniversary celebrations of the Indian Ocean Naval Symposium (IONS). Oman is a member of the IONS, a voluntary initiative that was started by the Indian Navy in 2008 to bring together navies along the Indian Ocean rim to discuss issues of concern and foster cooperation.

The event is scheduled to be flagged off by Defence Minister Nirmala Sitharaman and Indian Navy Chief Admiral Sunil Lanba from the Kochi naval base. The Zinat Al Bihaar, a yacht of the Royal Navy of Oman, arrived in Kochi with an Omani warship, the Shinas, on November 10. The 61-metre-long Zinat Al Bihaar was launched in Oman in 1988.

The INS Tarangini is the first sail training ship of the Indian Navy, which was commissioned in 1997 and has sailed over 220,000 nautical miles till date. The Tarangini made history in 2003-2004 when she became the first Indian Navy ship to circumnavigate the globe. The Tarangini recently returned to Kochi after a seven-month-long voyage that took it to the Arabian Sea, Red Sea, Suez Canal, Mediterranean Sea, Straits of Gibraltar, North Atlantic Ocean, Bay of Biscay, English Channel and North Sea.

The INS Sudarshini was commissioned into the Indian Navy in 2012 and has sailed more than 76,000 nautical miles till date. It has also trained more than 1,600 personnel, including those from foreign countries.

In November 2015, the Tarangini and another Royal Navy of Oman training vessel, the STS Shabab Oman, conducted a tall ship sail-together from Muscat to Kochi to mark 60 years of diplomatic ties. Initiatives like the tall ship sail-together are not only aimed at bolstering camaraderie between navies but also commemorating the legacy of ancient sailing ships that were the main means of commerce till about 150 years ago.