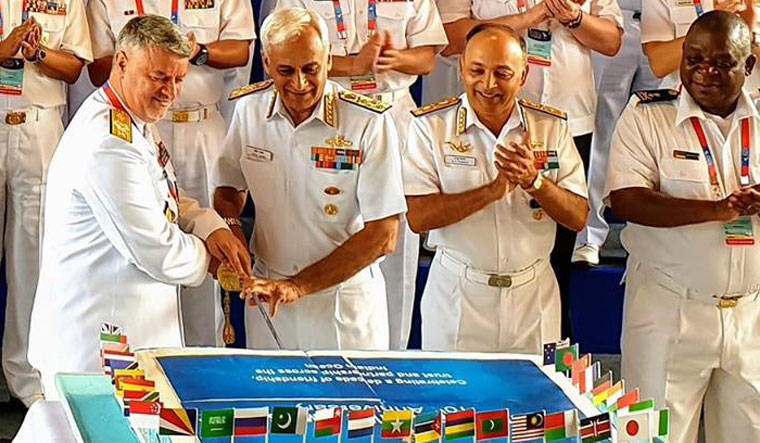 In the early years of the 15th century, when the legendary Chinese diplomat-cum-explorer Zheng He launched the first of his seven epic oceanic expeditions for the Ming Dynasty, Kochi was one of his main destinations. Zheng He not only commanded hundreds of massive ‘treasure ships’, but he also cracked down on pirates, proving security of the oceans was a prerequisite for growth.

Currently, 24 countries are members of the IONS, while eight nations, including Germany, China and Russia, have observer status. Welcoming the delegates, Indian Navy Chief Sunil Lanba said the IONS symposium was an “extension of the naval family” and underlined the need to keep the Indian Ocean waters safe given their importance to the history and growth of states in the ocean’s periphery.

Lanba explained the importance of maritime security in world politics by citing the example of Somalia. Instability on land in the conflict-ridden African state spawned piracy in the last decade, leading to an international effort to secure the sea lanes. Lanba argued, “The seas are too large for any one navy to secure single-handedly.”

Kochi is hosting the 10th anniversary of IONS. An IONS seminar on Tuesday featured multiple sessions on issues surrounding Indian Ocean states such as emerging maritime threats and the desirability of leveraging the IONS platform to coordinate and share resources for operations.

Retired admiral Arun Prakash, who was chief of the Indian Navy from 2004 to 2006, moderated the first session of the IONS seminar and underlined the importance of cooperation for security of the oceans. As major trade routes pass through the Indian Ocean, Prakash argued the region could be witness a conflict in the future, given the worries over China’s rise. Prakash also spoke of the importance of maritime security beyond trade by explaining the need to protect fibre optic cables, the lifelines of internet connectivity, as they pass through the ocean floor.

Prakash also spoke of the Indian Ocean region’s historic vulnerability to natural disasters such as earthquakes and volcanoes, noting the impact of the December 2004 tsunami that killed over 220,000 people in Indonesia, India, Thailand and Sri Lanka. Not surprisingly, cooperation in humanitarian assistance is a key aspect of IONS.

Rear Admiral Hossain Khanzadi, commander of the Iranian Navy and the current chair of the IONS, noted, “The traditional navy will not be able to meet the needs of the future [security] environment.”

Rear Admiral Jonanthan Mead of the Royal Australian Navy spoke about the need for cooperation in maritime security as over 90 per cent of his country’s trade passed through the seas.

Rear Admiral Rob Kramer, commander of the Royal Netherlands Navy, referred to the threats posed by climate change, which could precipitate disasters, such as the recent floods in Kerala.

IONS is yet to get the visibility and kind of political backing that formal military and political frameworks like NATO or the EU have. However, the discussions at Kochi, which showed that modern maritime security is a multifaceted challenge, prove that platforms like the IONS have much to contribute to bolstering stability and cooperation in a region of growing geopolitical importance.