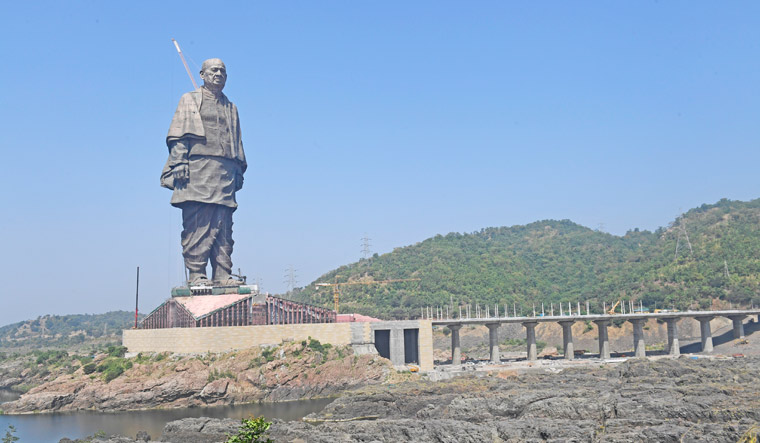 A few hours before Prime Minister Narendra Modi's arrival in Gujarat to inaugurate the world's tallest statue–Statue of Unity–at Kevadia Colony in Narmada district, the Gujarat Police on Tuesday evening detained several villagers and activists as a precautionary measure.

Modi arrived in Ahmedabad past 9 pm on Tuesday. He will dedicate to the nation the 182-metre statue of Sardar Vallabhbhai Patel on Wednesday. He will also inaugurate the 'Wall of Unity' (a monument defining India's unity) near the statue.

The villages in the entire tribal belt from Ambaji in North Gujarat to Umargaon in South Gujarat have announced a bandh call on Wednesday. Sarpanches of 22 villages situated near the Sardar Sarovar dam on the Narmada river have said villagers will not welcome the prime minister when he arrives for the function. They are protesting against the government for “ignoring” the tribal rights.

According to reports, several villagers and activists, including Lakhan Musafir and Rohit Prajapati, were detained on Tuesday. A villager, requesting anonymity, said that they would be released only after Modi's function is over on Wednesday.

This is not the first time the villagers and local activists have been detained ahead of the prime minister's programme at Kevadia Colony. They were detained before Modi visited the tribal area to inaugurate the multi-crore Sardar Sarovar Project ahead of the 2017 Gujarat Assembly elections.

The Gujarat government and the Narendra Modi-led Union government are being criticsed from various quarters over the expense of the giant structure. The statue and the amenities surrounding it were built at an estimated cost of Rs 3,000 crore.

The statue has been built using over 70,000 tonnes of cement, 18,500 tonnes of reinforcement steel, 6,000 tonnes of structural steel and 1,700 metric tonnes of bronze, which was used for the outer cladding of the structure, according to the government statement. A viewing gallery at a height of 135 metres has been created inside the statue to enable tourists to have a view of the dam and nearby mountain ranges.

While the Congress has welcomed the statue, it has flayed the government's alleged failure to acknowledge rights of the tribals in the area. Congress president Rahul Gandhi has also criticised the government over the fact that some parts of the statue were made in China.

Former Gujarat chief ministers Suresh Mehta and Shankersinh Vaghela have also come out against the extravaganza.

Mehta has pointed out that the Narmada canals, supposed to provide drinking water and water for irrigation in Gujarat, are still incomplete. He also said that against earlier claim that not a single penny would be taken from the public, public sector undertakings have contributed for the project. Even the Sardar Sarovar Narmada Nigam Limited has diverted funds for the project, he claimed.

Vaghela said that the statue was an unnecessary expense, especially when Gujarat is debt ridden.