Tribals warn Modi of stir during Statue of Unity inauguration 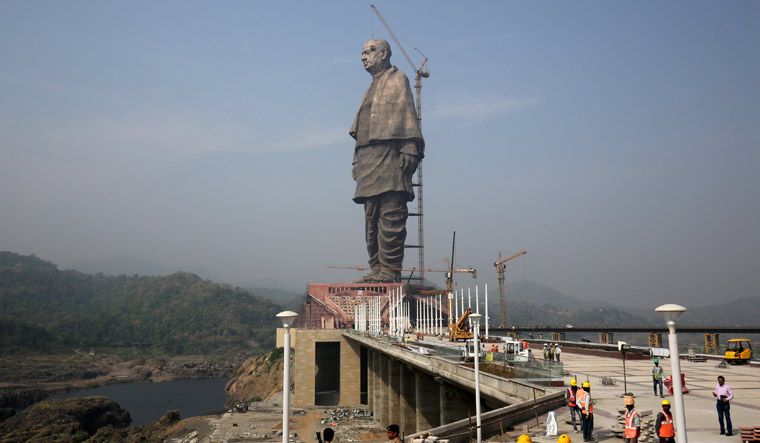 Final work on the Statue of Unity | Reuters

The headmen of 22 villages situated near the Sardar Sarovar Dam on Monday wrote an open letter to Prime Minister Narendra Modi stating that villagers would not welcome him at the inauguration of the Statue of Unity, in memory of Sardar Vallabhbhai Patel, on Wednesday.

Local tribal leaders have also announced a boycott of the inauguration function, citing destruction of natural resources due to the memorial for Sardar Patel.

The Statue of Unity is situated on an islet in Kevadiya and, at 182 metres, is touted as the world's tallest statue.

"These forests, rivers, waterfalls, land and agriculture supported us for generations. We survived on them. But, everything is being destroyed now and celebrations are also planned. Don't you [Modi] think it's akin to celebrating someone's death? We feel so," the letter, having common content and signed by sarpanchs of 22 villages, stated.

"We all villagers want to tell you with extreme grief that we will not welcome you on October 31. Even if you come here like an unwanted guest, you are not welcome here," it added.

The villagers alleged that people's hard-earned money was being wasted on projects like the Statue of Unity though several villages of the area were still deprived of basic facilities like schools, hospitals and drinking water.

"If Sardar Patel could see the mass destruction of natural resources and injustice done to us, he would cry. When we are raising our issues, we are persecuted by police. Why are you not ready to listen to our plight?" the letter said.

Earlier this month, tribal activists had announced that people living in 72 villages near the dam would join the protest on October 31 by not cooking food during the inauguration of the Statue of Unity.

"We have also urged tribals of the eastern belt of Gujarat, from Dang till Ambaji, to join our protest by observing bandh that day. We are confident that the entire tribal population will stand up against the injustice," said tribal leader Anand Mazgaokar.

Meanwhile, unidentified persons tore and defaced posters of Modi and Chief Minister Vijay Rupani in several parts of the district during the last few days. "It happened because locals are angry. No one provoked them. We have only given call for bandh," Mazgaokar added.

Gujarat Chief Secretary J.N. Singh on Monday visited the site to take stock of ongoing preparations for inauguration of the Statue of Unity.

"We have invited dance troupes from across the country to perform here during the inauguration. Air Force planes and helicopters would shower flowers on the statue during unveiling. I am here today to see how we can synchronise them," Singh told reporters.

The Gujarat Congress also targeted the BJP government and Modi over the non-completion of Narmada canal network.

Ahead of the inauguration of the Statue of Unity, leader of opposition in Gujarat Assembly, Paresh Dhanani, wrote a letter to Rupani and demanded that the Narmada project should be declared as a national project to give a "fitting tribute" to Sardar Patel.

"The construction of the dam got delayed because of litigation and stay by the Supreme Court. But, there was no ban on the construction of canal network. But, instead of completing the network, the BJP only did politics. Thus, canals having cumulative length of of 20,000km are yet to be constructed," Dhanani said in the letter.

Former Gujarat CM Shankersinh Vaghela demanded that the contribution of all the royals, who had "gifted" their princely states to build a united India after independence, should get a mention in the museum built beneath the Statue of Unity.

He attacked Modi saying that the Statue of Unity was just a "marketing tool" for the ruling BJP and demanded that plight of tribals and poor must be heard first.