Congress yet to release list of candidates; nominations to begin on November 2 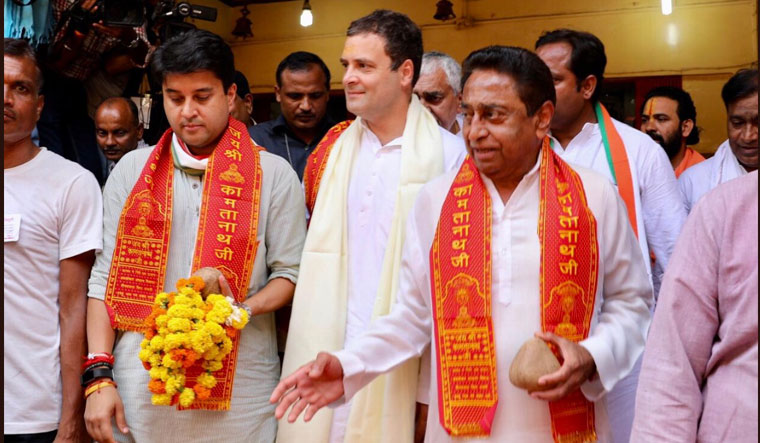 With the dates for filing nominations for Assembly elections in Madhya Pradesh approaching, the fight among top Congress leaders is turning ugly. Faced with the eternal question of who will be the next chief minister, the Congress party leaders are currently locked up in a battle for ensuring maximum number of party nominations for their supporters.

The Congress's central election committee, the topmost body responsible for distributing tickets for party candidates, has to be reconstituted in order to accommodate the demands of various factions. Originally the committee included PCC chief Kamal Nath, leader of opposition Ajay Singh, AICC general secretary Madhusudan Mistry and two others. The state election campaign committee chairman Jyotiraditya Scindia also got himself included in the committee. Later, to strike a balance between other factions, party chief Kamal Nath included former chief minister Digvijay Singh as a special invitee.

The process to select candidates for 230 seats began early this month with four rounds of meeting already over. The party could so far decide on just 70 seats of which over 40 are sitting MLAs. The delay in the process and several rounds of meetings are being attributed to the differences among leaders over the names of the candidates. The nominations for the polls begin on November 2.

According to party insiders the entire leadership got divided into two camps with Jyotiraditya Scindia on one side and others led by the Kamal Nath-Digvijay Singh duo on the other. The initial two rounds of meeting to finalise the tickets were conducted among these four leaders which made other factions of the party in the state unhappy.

Former state party president Arun Yadav took strong exception to the ticket distribution process alleging that his supporters were grossly overlooked. He made a representation before party president Rahul Gandhi and senior leader Sonia Gandhi. After his meeting with the party high command, the central election committee was again reconstituted. Yadav was included in the committee by the virtue of being former PCC chief.

While all the senior Congress leaders from Madhya Pradesh are away in Delhi discussing the probable candidates, thousands of party ticket aspirants are also camping in the national capital. The situation has suddenly created a void in Madhya Pradesh from the Congress's side which is challenging 15 years of BJP rule.

According to party sources, the AICC has conducted a survey of probable candidates along with a separate private survey done by Madhya Pradesh Congress president Kamal Nath. Apart from these service by professional agencies, the AICC had also sent their secretaries to various districts to look for candidates who could win elections. However, all these exercises seem to be in vain as senior leaders are fighting among themselves to ensure tickets to their supporters.

Madhya Pradesh Congress is a seriously divided lot among Digvijay Singh, Jyotiraditya Scindia and Kamal Nath. With the elections fast approaching, each leader is flexing muscles to get party ticket to maximum number of supporters.

Though initially it seemed that former Chief Minister Digvijay Singh was being side-lined, his last minute statement that he was not campaigning because the party felt that his "speeches were causing harm to the Congress" made him comeback to the mainstream. Prior to this, the former chief minister was lying low for the last six months ever since Digvijay was dropped as the general secretary of Rahul Gandhi's new team. He was heading the coordination committee of the Madhya Pradesh Congress with the job of bringing together the warring factions at district-levels.

Meanwhile, another senior leader Scindia also went into sulking after many of his supporters in the Gwalior-Chambal region were left out in the initial list of shortlisted candidates. Later, Scindia’s demands were accommodated at the behest of Rahul Gandhi.