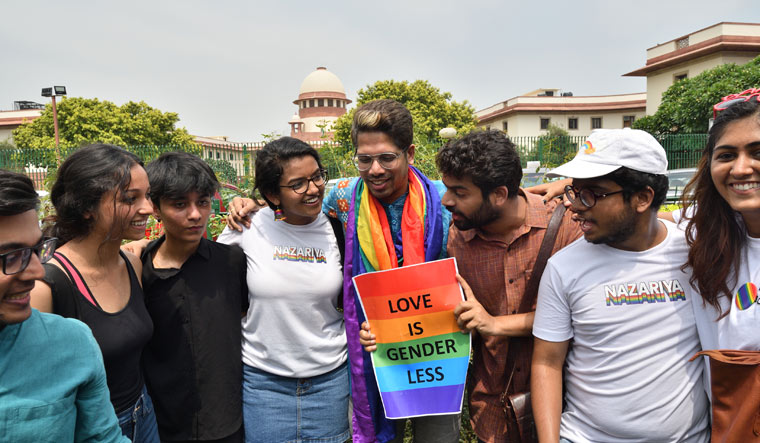 In July this year, the Union government, in its affidavit, left it to the “wisdom” of the Supreme Court to decide on the question of legality of Section 377 of the IPC. Instead of taking a legislative route to decide on the discriminatory section criminalising homosexuality, the government sought to pass the buck to the courts.

The apex court rose to strike down the 158-year-old law, which owes its origin to the Victorian morality. Various governments, fearing reprisal from the dominant sections of the society, refused to recognise the demands from the people, who were in love with people from their own gender. Religious and social leaders termed homosexuality as psychological disease or even depravity. After the RSS said it was not for criminalising homosexuality even though it considered it against Indian culture, the BJP government sought recourse by leaving it to the courts to decide the case. Political leadership abdicated its authority to the courts as it thought bringing any law on the issue could anger vocal sections of various religious and social groups. The BJP had earlier opposed decriminalising the Section 377.

In fact, the opening lines of the Justice Misra's judgment set the tone of as to how the judiciary recognised individual rights. “I am what I am, so take me as I am” Justice Mishra wrote quoting German writer Johann Wolfgang von Goethe. For added impact, he quoted Arthur Schopenhauer—“No one can escape from their individuality.

Even the other Judges – Indu Malhotra, R.F. Nariman, D.Y. Chandrachud quoted poetry to recognise the tender of emotions of love which guide human beings.

Justice Misra and Justice A.M. Khanwilkar, in their judgment, ruled how Section 377 IPC was discriminatory. They compared Section 375 IPC (rape) with Section 377 IPC to say this section talks about the absence of wilful and informed consent for an act to be termed as rape but Section 377 did not contain any such qualification. This results in criminalising even voluntary carnal intercourse between homosexuals, heterosexuals, bisexuals and transgenders.

They overturned the Suresh Kumar Koushal vs Naz Foundation two-bench judgment which had upheld the constitutionality of Section 377 IPC saying the LGBT community comprised only a minuscule fraction of the total population.

“Such a view is constitutionally impermissible,” Justice Misra said.

Justice Indu Malhotra was even more unsparing in her remarks. “History owes an apology to the members of this community and their families, for the delay in providing redressal for the ignominy and ostracism that they have suffered through the centuries,” she said in her order.

What this judgment do is to contextualise homosexuality through prism of science and medical research. “Sexual orientation is one of the many biological phenomena which is natural and inherent in an individual and is controlled by neurological and biological factors. The science of sexuality has theorised that an individual exerts little or no control over who he/she gets attracted to. Any discrimination on the basis of one's sexual orientation would entail a violation of the fundamental right of freedom of expression,” the judgment added.

The Supreme Court judgment noticed that such a section was also denying health benefits to transgenders due to the stigma attached to them.

“Bigoted and homophobic attitudes dehumanise the transgenders by denying them their dignity, personhood and above all, their basic human rights,” the order added.

The Supreme Court judgment said the consensual relationships between same sex couples is violative of the fundamental rights guaranteed by the Constitution. It struck down the Section 377 to uphold he right to equality, privacy, dignity and freedom of expression to all irresepctive of their sexual orientation.

“'The love that dare not speak its name' is how the love that exists between same-sex couples was described by Lord Alfred Douglas, the lover of Oscar Wilde, in his poem 'Two Loves' published in 1894 in Victorian England,” Nariman said.

Justice D.Y. Chandrachud said, “The choice of whom to partner, the ability to find fulfilment in sexual intimacies and the right not to be subjected to discriminatory behaviour are intrinsic to the constitutional protection of sexual orientation. Members of the LGBT community are entitled to the benefit of an equal citizenship, without discrimination, and to the equal protection of law.”

“It is difficult to right the wrongs of history. But we can certainly set the course for the future. That we can do by saying, as I propose to say in this case, that lesbians, gays, bisexuals and transgenders have a constitutional right to equal citizenship in all its manifestations. Sexual orientation is recognised and protected by the Constitution.

Section 377 of the Penal Code is unconstitutional in so far as it penalises a consensual relationship between adults of the same gender. The constitutional values of liberty and dignity can accept nothing less,” the judgment added.

The legal treatises Fleta and Britton, which date back to 1290 and 1300 respectively, documented prevailing laws in England at the time. These treatises made references to sodomy as a crime. The Buggery Act, 1533 was re-enacted in 1563 during the regime of Queen Elizabeth I, which penalised acts of sodomy by hanging.

In 1861, death penalty for buggery was abolished in England and Wales. However, it remained a crime “not to be mentioned by Christians”.

Between 1806, when reliable figures begin, and 1900, 8,921 men were indicted for sodomy, gross indecency or other ‘unnatural misdemeanours’ in England and Wales. Ninety men per year were, on average, indicted for homosexual offences in this period. About a third as many were arrested and their case considered by magistrates. Most of the men convicted were imprisoned, but between 1806 and 1861, when the death penalty for sodomy was finally abolished, 404 men were sentenced to death. Fifty-six were executed, and the remainder were either imprisoned or transported to Australia for life. Two such men, James Pratt and John Smith, were the last to be executed in Britain for sodomy on 27 November, 1835.

Justice Indu Malhotra even put the British Prime Minister Theresa May's speech on record. In April, May had said, “Across the world, discriminatory laws made many years ago continue to affect the lives of many people, criminalising same-sex relations and failing to protect women and girls. I am all too aware that these laws were often put in place by my own country. They were wrong then, and they are wrong now. As the UK’s prime minister, I deeply regret both the fact that such laws were introduced, and the legacy of discrimination, violence and even death that persists today.”