The verdict, which runs into 493 pages, has borrowed lavishly from English literature 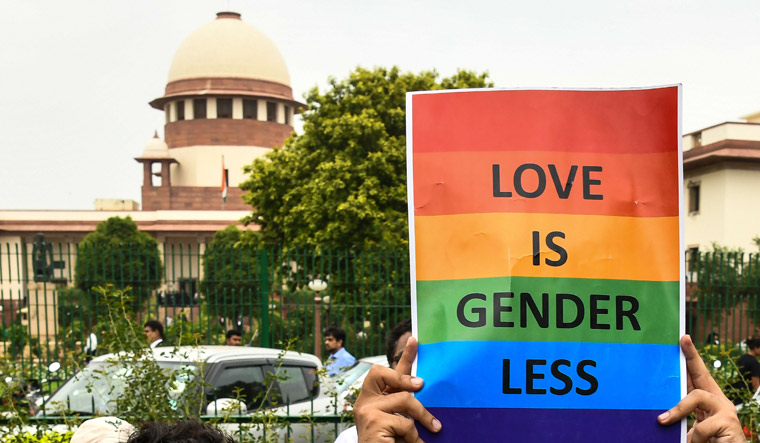 A member of the lesbian, gay, bisexual, transgender community holds a placard outside the Supreme Court after the decision to strike down the colonial-era ban on gay sex | AFP

The Supreme Court on Thursday reinstated faith in the Indian judiciary as it unanimously derecognised the part of Section 377 that criminalises consensual sex between two individuals of the same gender. The five-judge bench, headed by CJI Dipak Misra, comprising Justices R.F. Nariman, A.M. Khanwilkar, D.Y. Chandrachud and Indu Malhotra, delivered its verdict, explaining why the colonial law is from a draconian era.

Interestingly, the landmark verdict, which ran into 493 pages, has borrowed from English literature. Starting with German thinker Johann Wolfgang von Goethe to Shakespeare and Oscar Wilde, the mammoth judgment did not leave any stone unturned to state the need for the law to be struck down.

"I am what I am, so take me as I am"—that's how CJI Dipak Misra began pronouncing the judgment, quoting Goethe. This was immediately followed by a statement from another German philosopher Arthur Schopenhauer: "No one can escape from their individuality."

To emphasise on the significance of individuality, Misra borrowed John Stuart Mill's statement: "But society has now fairly got the better of individuality; and the danger which threatens human nature is not the excess, but the deficiency of personal impulses and preferences."

Further, the Supreme Court, at different instances, quoted lavishly from Shakespeare. Stressing on the importance of identity, the judgment sought the help from the famous play Romeo and Juliet: "'What‘s in a name? That which we call a rose by any other name would smell as sweet.' The said phrase, in its basic sense, conveys that what really matters is the essential qualities of the substance and the fundamental characteristics of an entity, but not the name by which it or a person is called... it is understood that the name may be a convenient concept for identification but the essence behind the same is the core of identity. Sans identity, the name only remains a denotative term," the judgment explained.

Stating that Indian constitution is built on the fundamental rights, the Supreme Court said: "The fundamental rights chapter is like the north star in the universe of constitutionalism in India. Constitutional morality always trumps any imposition of a particular view of social morality by shifting majoritarian regimes". The "north star" is in reference to Shakespeare's Julius Caesar play where Caesar tells Cassius:

“I could be well moved, if I were as you;

If I could pray to move, prayers would move me:

But I am constant as the Northern Star,

Of whose true-fixed and resting quality

There is no fellow in the firmament.”

Later, the Supreme Court narrated an incident from Oscar Wilde's life, when the latter was prosecuted for homosexuality. During the trial, the prosecutor, referring to homosexual love, asked Wilde, “What is ‘the love that dare not speak its name’?” Wilde responded:

"'The love that dare not speak its name' in this century is such a great affection of an elder for a younger man as there was between David and Jonathan, such as Plato made the very basis of his philosophy, and such as you find in the sonnets of Michelangelo and Shakespeare. It is that deep spiritual affection that is as pure as it is perfect. It dictates and pervades great works of art, like those of Shakespeare and Michelangelo, and those two letters of mine, such as they are. It is in this century misunderstood, so much misunderstood that it may be described as “the love that dare not speak its name,” and on that account of it I am placed where I am now. It is beautiful, it is fine, it is the noblest form of affection. There is nothing unnatural about it. It is intellectual, and it repeatedly exists between an older and a younger man, when the older man has intellect, and the younger man has all the joy, hope and glamour of life before him. That it should be so, the world does not understand. The world mocks at it, and sometimes puts one in the pillory for it.”

The verdict has helped India join the league of 25 other countries where homosexuality is legal.