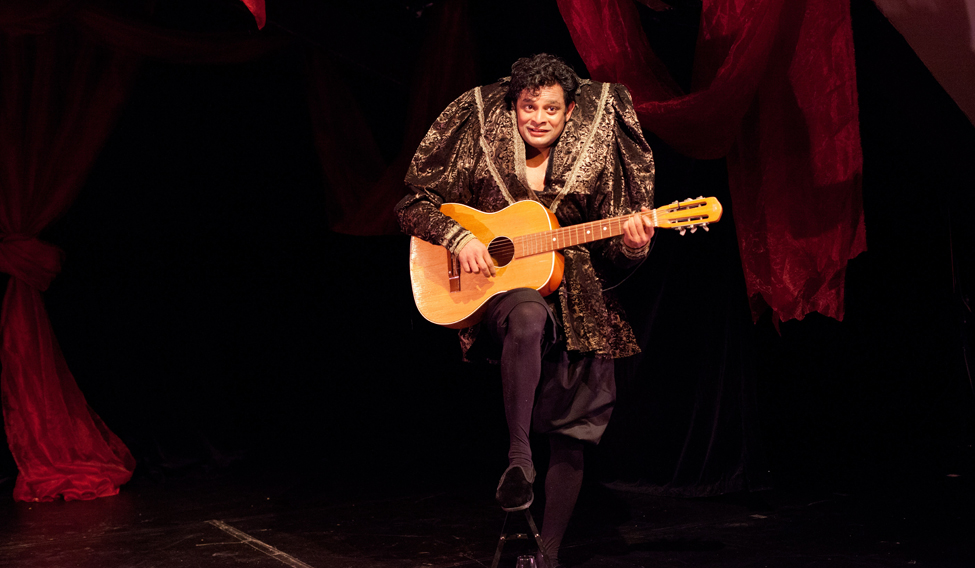 Physical comedy 'Madbeth' to be performed at Veenapani arts fest

Adishakti’s fourth edition of the Remembering Veenapani Festival, at their campus in Pondicherry, starts on February 3. Veenapani Chawla was an internationally acknowledged and much awarded theatre academician and practitioner, recognised for her efforts in creating a contemporary aesthetic based on traditional folk forms. She was also awarded the Sangeet Natak Akademi and was the subject of a book by Shanta Gokhale, titled The Theatre of Veenapani Chawla—Theory, Practice and Performance. In 1999, Veenapani established the Adishakti campus, which houses the members of the Adishakti Theatre, Dance, Music and Puppetry Repertory Company.

The festival is a combination of a film screening and dance, music, and theatre performances.

It starts on the February 3, with Ramanaya, which explores the Hindu epic in a playful way. The performance is housed in a model made of materials recycled from junk and debris. The landscape is visualised as a kind of mind map, where the scenarios unfolding in the epic are discussed by two storytellers. As they dig deeper into the mythology, they find new perspectives in its surreal world and invite the audience to join them in this journey. It is produced by the Sandbox Collective from Bengaluru in association with the Goethe Institute and is directed by Felix Mathias Ott.

Written, directed and performed by Deepika Arwind, No Rest In The Kingdom, performing on February 4, is a devised, physical theatre performance about the misogyny perpetrated on a daily basis. A comedy with music and movement, in which the performer plays four characters, including a feline, the piece draws from the lives of urban characters “who speak similar languages of consumerism and technology”.

Up Down & Sideways showing on February 8, is a musical and film-based portrait of a community of rice cultivators from the northeast and their memories of love and loss, created from working together on the fields. It is the first feature film from the u-ra-mi-li project, a large body of work that looks at the connections between music and labour. Produced by Manas Malhotra and directed by Anushka, Meenakshi & Iswar Srikumar

Unlyrics, to be staged on Feb 9, is a solo performance by Swedish pianist Emma GilljamTillu who currently lives and works in Mumbai. From “playful dances, to romantic ballads, melancholic waltzes to monumental odes and soft songs” , Emma will undertake a whirlwind tour of the classics, interspersing them with interesting anecdotes about the pieces and the composers.

'One man, One throne, One crown, One hilariously tragic experience' is the tagline for Madbeth, directed and performed by Rupesh Tillu. The solo, which has toured in Europe , the U.S. and India, is a highly interactive physical comedy loosely inspired by Shakespeare’s classic. The performance is a combination of slapstick, acrobatics, mime, songs and improvisations. It performs on February 10.

On February 11, it is time for Conditions of Carriage, a contemporary dance-theatre performance. In the space of a square pit, a group of people negotiate the force of gravity within their bodies. Through simple acts of jumping, walking, standing and sitting, “they reflect upon the body and its physicality through the immediacy of action”. In the process, they begin “to construct a frame around three fundamental questions—who are we, where are we and where do we want to go”.

Beer Puppets, a jazz performance, takes the stage on Feb 15. The group, which collaborates with several international artistes, experiments with rich harmonies.

Decohered plays on the 16th. It is a digital art music concert by Kochi-based Salim Nair, a classically trained jazz flautist who’s been performing across India and U.S. for the last three decades. The show is produced by Arya P. Dinesh.

Quicksand, written and directed by Neel Chaudhuri, like all his plays, was devised out of a workshop process. The story unfolds after an incident at an airport between a man and a woman, who are strangers to each other and anonymous to the world. “What follows is a trial by social media and the steady, irreversible unraveling of two private lives in the public eye”.

On the last day, February 18, the dance-theatre performance Agent Provocateur takes centrestage. It explores the effects that a climate of growing intolerance/indoctrination has on the body and its impulses.

Resistance and negotiation arise from the conflict, which can be humorous too. Choreographed and directed by Sujay Saple, it is performed as a series of episodes with two performers and a live musician.