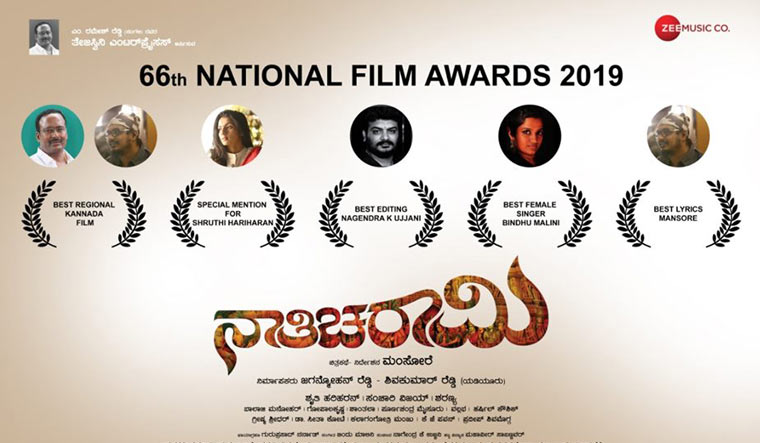 Days after the Kannada film Nathicharami bagged five national awards, a controversy erupted over the movie. A filmmaker from Bengaluru approached Karnataka High Court on Wednesday, claiming that a member of the jury panel was associated with the production of Nathicharami.

Dayal Padmanabhan, a Kannada filmmaker, wrote to the directorate of film festivals and ministry of information and broadcasting, alleging that B.S. Lingadevaru, who was part of the regional jury panel in 66th National Film Awards, was associated with a company named AKKA Communications Private Limited where the movie was edited. According to the complaint, Lingadevaru is one of the directors of AKKA Communications. As per the regulations, a jury member or chairman should not be associated in any manner with the films submitted for awards.

Padmanabhan, who is a movie director, producer and screen writer, told THE WEEK, “Since Lingadevaru has direct involvement with the film and has been part of jury panel show that he had strong influence in the selection of the awards.” He further alleged that the editor of the movie, Nagendra K. Ujjani, who won the award for the best editing, had edited Lingadevaru’s 2015 film Naanu Avanalla Avalu—a film that had won two awards at the 62th National Awards in the best actor and best make-up categories.

When THE WEEK contacted Lingadevaru, he said he is unaware of any case filed against him.

Padmanabhan, whose movie Aa Karaala Ratri competed in 15 different categories at the national awards this year, claimed that his movie had better lyrics by Kannada poet D.V. Gundappa than Nathicharami, which received the award for the best lyrics.

Nathicharami won the best Kannada movie award and awards for best editing, best lyrics, best female playback singer besides a special mention award for the role of protagonist played by Sruthi Hariharan. The film revolves around the physical desires of a widow. Kannada feature and non-feature films together won a record 13 awards this time, with Nathicharami leading with five.

The 66th National Film Awards got embroiled in a controversy for the first time when fans of Mollywood actor Mammootty sent hate messages to chairman Rahul Rawail, alleging that the jury panel overlooked the performance of the actor in Peranbu. The actor had come out apologising for the behaviour of his fans.