Whose side is Bollywood on? The BJP-Congress split in B-Town 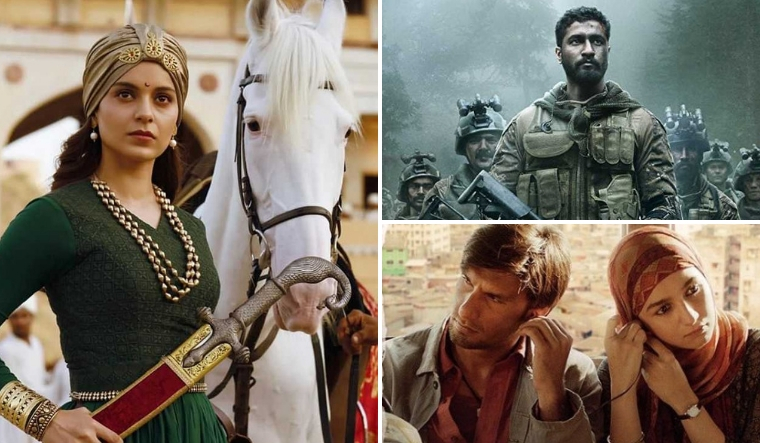 Kangana Ranaut has taken to a patriotic persona while Ranveer Singh and Alia Bhatt opt to be apolitical.

Acting and politics have long gone hand-in-hand in India. Here, actor-politicians have ruled entire states, held union ministry portfolios, and even had temples built in their name. Even so, the 2019 General Elections may prove to be Bollywood’s most political moment yet.

The latest battle lines in Bollywood are no longer about Shah Rukh Khan vs Salman Khan or Priyanka Chopra vs Deepika Padukone— tinsel town’s latest frontier is all about electoral politics.

Put simply, industry figures have grown more open in voicing their political preferences. In an era of politicised military movies like Uri: The Surgical Strike and the upcoming wave of Balakot-inspired films, much of this support has gone to the BJP.

Actors like Kangana Ranaut, Anupam Kher, and Vivek Oberoi have all come out in support of Narendra Modi and the BJP. Oberoi notably led a campaign of over 900 artistes asking the populace to elect a “mazboot Sarkar” over a “majboor Sarkar” (strong government over a helpless government).

Urmila Matondkar is one of the only two Bollywood stars to join the Congress this election—the other actor to have joined the party is Shatrughan Sinha, who has been an active politician for years. Raj Babbar too earns a mention, having been part of the Congress for over a decade.

More celebrities can be seen opposing the BJP than can be seen openly endorsing the Congress. On April 4, 600 theatre artists including Anurag Kashyap and Naseeruddin Shah issued a public appeal in early April, attacking the BJP for degrading the “idea of India” and asking voters to “vote for secular democratic, inclusive India”.

The appeal did not specify which party they wanted voters to vote for, however. Another statement, this time by a 100 filmmakers, also called for people to vote out the BJP — but most of the signatories were non-Bollywood figures or independent artists.

When it comes to supporting the BJP, Bollywood is not at all muted. The latest B-town figure to take the BJP banner is Sunny Deol, who was announced as a party candidate for the Gurdaspur seat in Punjab.

B-town’s support for Modi is not an unplanned coincidence. Since 2018, the party has engaged in outreach programmes to Bollywood celebrities, with Nitin Gadkari personally meeting Bollywood actors like Akshay Kumar, Salman Khan and Salim Khan as part of the Sampark for Samarthan (Contact for Support) outreach campaign.

Furthermore, a “sting” operation by Cobrapost revealed a host more of B-list actors willing to support the BJP, Congress or AAP—for a fee. The list of names uncovered by Cobrapost’s 'Operation Karaoke' included playback singers, as well as actors like Vivek Oberoi, Jackie Shroff, Minissha Lamba, Koena Mitra, Poonam Pandey and Sunny Leone, all of whom were allegedly willing to take payment in exchange for supporting a political party of their choice, although according to the report, most of them were game for endorsing the BJP.

Elsewhere, the Congress has also seen its share of celebrity endorsements, albeit less blatantly than the BJP. Kalki Koechlin was featured in a video uploaded by the Congress calling for voters to be “careful with their vote”. However, rather than Kalki herself endorsing the party, her support is seen by implication.

This distancing of politics from the personal was seen even from Shah Rukh Khan. On April 22, Red Chillies Entertainment released a short rap video titled 'Karo Matdan', where the actor can be seen imploring citizens to vote. After Modi hailed the video as a fantastic effort—leading some to think that SRK was in the BJP camp—the Congress responded with a video of their own, from 2017. Congress politician and filmmaker Yasmin Kidwai released a snippet from her documentary Filmisthaan - The Euphoric State of Bollywood on India & Our Intrinsic Pluralistic Culture, where SRK says, “Being diverse is a good thing, being divisive is not. Like art has no religion, I think our country has no religion, and all of them amalgamated together."

With both the major national parties attempting to appropriate his vote, SRK keeps his true political preference unspoken. Choosing to stay apolitical can also be problematic, however, as Alia Bhatt and Ranveer Singh both found out. After stating that they do not have any political views or ideology during a promotional tour for Gully Boy, the duo met with an impassioned criticism by Kangana Ranaut. In an impassioned outburst, Kangana called the duo "irresponsible".

Elsewhere in Bollywood, political favour can play out differently between spouses.

Twinkle Khanna has criticised the BJP in the past, whereas in the case of Akshay Kumar, her husband, his BJP leanings have been unstated but prominent. This difference in opinion between the spouses, was commented on by none other than Narendra Modi, who joked in his ‘non-political’ interview with Akshay that Twinkle vented all her anger on the PM resulting in a peaceful life for Akshay at home.

Another case of political differences between spouses is that of Shatrughan Sinha and Poonam Sinha. Shatrughan recently left the BJP after serving as its MLA for many years to join the Congress, while his wife Poonam took up a party ticket for the Samajwadi Party.

When it comes to other parties, the record is vaguer still. Actress Gul Panag and musician Vishal Dadlani were both members of AAP during the party’s initial rise to power. However, both of them left the party due to personal differences with it.

Ultimately, there are good reasons for Bollywood figures to remain silent about their political preferences. As Nandita Das told The Week, “politics and conversations have all become very polarised”. In an era where actors increasingly deal with death threats, an apolitical silence proves to be the best defence against unwarranted attention.