Employees of Ordnance Factory Board vow to fight against its corporatisation 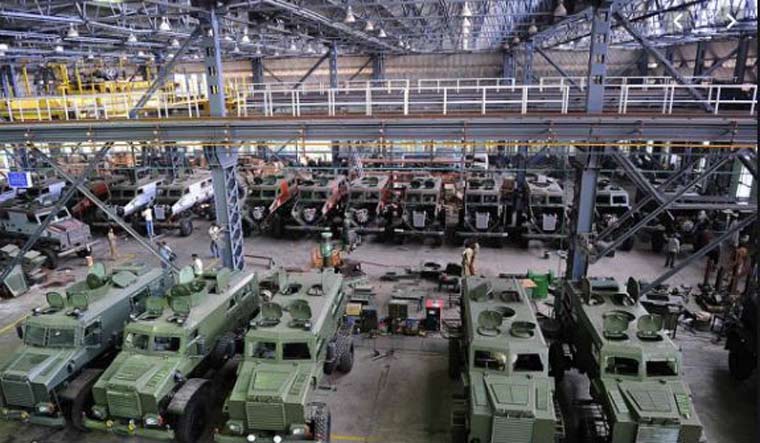 Employees of the Ordnance Factory Board (OFB) have said they would oppose the Narendra Modi government's order to dissolve the OFB.

The order issued on Tuesday said that employees and assets belonging to the OFB would be transferred to seven public sector units.

This will finally bring to an end the existence of the OFB, which was established by British India in 1775.

The order will come into effect on October 1, but the OFB employees federation has said it would observe the day as a black day, with the entire ordnance factories workforce boycotting their lunch.

The OFB employees federation has also gone to the Madras High Court challenging the Union government's move of the corporatisation of 41 ordnance factories.

The court has issued notice to the Centre in this regard.

"We will fight till the end as the move is against the employees' wishes,” C. Srikumar, general secretary of the employees federation, told THE WEEK.

“In a referendum carried out recently in all 41 factories and OFB headquarters, 61,199 out of 61,564 employees (who participated in the referendum) voted against the government's decision. Only 365 employees were in favour of it,” he said.

The employees union of ordnance factories has been opposing the move fearing privatisation of factories.

On June 16, 2021, the Union government gave the go-ahead to the long-pending “corporatisation” of OFB—which has an annual turnover of around Rs19,000 crore—into seven 100 per cent government-owned entities.

While taking this decision, the government assured existing Central government employees of OFB that their service conditions would be protected. Also, pension liabilities of retirees and existing employees will continue to be borne by the government.

Fearing backlash from the OFB employees union in July, Defence Minister Rajnath Singh introduced the Essential Defence Services bill, 2021, to prevent workers in defence establishments from going on strike. The bill was eventually passed by Parliament in August.

“The government has decided that all employees of OFB belonging to the production units and also the identified non-production units... shall be transferred en masse to the new DPSUs on terms of foreign service without any deputation allowance initially for two years from the appointed date (October 1),” the order added.

Defence ministry officials claimed that the new structure will help in overcoming various shortcomings in the existing system of OFB by eliminating inefficient supply chains, providing these companies incentive to become competitive and exploring new opportunities in the market, including exports.

Official sources maintained that the functioning of the Ordnance Factory Board has come in for study by various high-level committees over the last two decades, intending to improve their functioning and making these factories as vehicles of self-reliance for defence preparedness of the armed forces.