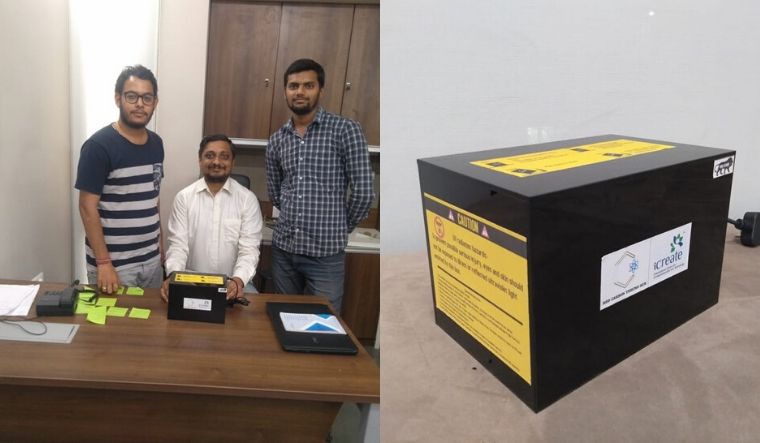 Amid the rising number of COVID-19 cases in the country, people are in dilemma even to bring a packet of milk or groceries or currency change to their house. Despite washing the packets with soap solution, it might still be difficult to stop wondering if the surface of the bags are coronavirus-free or not.

That’s where a steriliser developed by Red Carbon TechnoHub, an Ahmedabad-based company comes into picture. It has manufactured a Portable UVC Steriliser that destroys germs, including the COVID-19 virus and bacteria, from various surfaces.

Red Carbon TechnoHub’s director Prasen Vinchurkar told THE WEEK that as against normal methods of sanitisation, which are often not 100 per cent and includes washing with surfactant or alcohol that can increase the pore size of the masks, the UVC steriliser destroys the virus in a minute. The company, he said, has also got a provisional patent.

He further explained that shorter wavelength penetrates until the nucleic acid of the virions and mammals. The less than 260 nm wavelength of UV light energy is 4.5 eV. It exposes the DNA and breaks down the hydrogen bond between adenosine and thymine.

According to Vinchurkar, the portable device needs normal power supply and is handy for hospitals and homes where there are a lot of things like masks, currency notes, mobiles, keys, stethoscopes, surgical masks and so on.

The cost of the device developed by Vinchurkar’s team, which also comprises his students Aashish Jain and Vijay Kumar Mourya, and supported by iCreate, is Rs 2000. iCreate–International Centre for Entrepreneurship and Technology–is an autonomous institute of the Gujarat government. iCreate CEO Anupan Jalote remarked that he was proud of the team that rose to the occasion in such testing times and overcame odds to deliver functional products to the company.

The prototype of the 9x6x6 inch device has been made and commercial production has begun.

Currently, his team has a capacity to manufacture 200 devices a day, said Vinchurkar. He said the raw materials have been sourced locally as well as from Rajasthan.

The idea about the need for such portable UVC sterilisers crossed their minds when COVID-19 was at its peak in China towards February-end and early March. “We thought it could happen in India also and hence, we had started making a prototype,” he said.

In the second phase, the company is planning to develop a steriliser that can sterilise a room. The cost will be around Rs 5000, Vinchurkar said.