Why Jeff Bezos received a cold welcome by the Modi govt 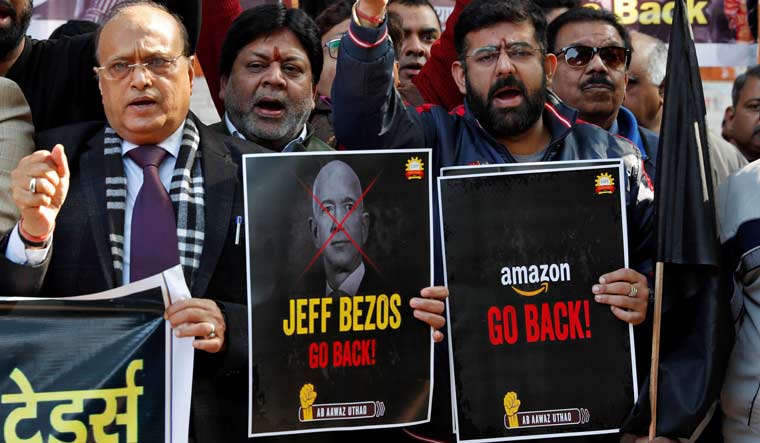 Members of the Confederation of All India Traders (CAIT) hold placards and shout slogans during a protest against the visit of Jeff Bezos, founder of Amazon, to India, in New Delhi, India, January 15, 2020 | Reuters

Adorned in colourful ‘Modi’ jackets for his two-day visit to India, a place he says he falls in love with every time he visits, Jeff Bezos promised to invest $1 billion in India and even create a million jobs. Yet, the response that the world’s richest man and owner of Amazon faced was one of trader protests and a cold shoulder by the union government.

Bezos faced opposition on multiple fronts. Days before his arrival, the Competition Commission of India announced a probe against e-commerce websites Amazon and Flipkart for predatory practices in terms of giving discounts. In addition, traders' bodies held large protests across the country against his visit as they accused Amazon of being against small traders and businessmen.

Such unusual treatment against a powerful CEO stems from two factors, both political. RSS affiliates oppose Amazon, as do small traders and businessmen who see it as a predatory entity which takes away their business. The RSS-affiliated Swadeshi Jagaran Manch has been campaigning against e-commerce websites, saying they violate the FDI policy of the country and are against the economic interest of the country.

The traders and business community members are the BJP’s core vote bank. It was in their interest, as well as in the interest of farmers, that Prime Minister Narendra Modi refused to sign the RCEP agreement.

Another apparent grouse against Bezos regards the other company he owns, The Washington Post. The US-based newspaper has been critical of Modi government on a number of issues; in recent times because of the anti-CAA protests and Kashmir. Its editorials have taken critical views of the government’s action. BJP's foreign affairs department head Vijay Chauthaiwale did not mince words when he said should Bezos should talk to his employees in Washington DC or otherwise his “charm offensive is likely to be waste of time and money.”

The union government had also taken a strong stand against anyone speaking about the CAA law as it was clear from the way it reacted to Malaysian Prime Minister Mahathir Mohamad saying people had died because of the law. On January 8, India curbed the import of palm oil—a key export from Malaysia to India.

Amazon responded to the controversy by posting a signed letter by Bezos on its e-commerce website. “Over 550,000 small and medium businesses are using the Amazon.in marketplace to offer India's largest selection of products. Karigar and Saheli have enabled over a million artisans and women entrepreneurs to go online. More than 60,000 businesses are exporting 'Make in India' products globally, with cumulative exports exceeding US$1 billion,” Bezos letter said.

It also spoke about creating content in local languages such as Mirzapur and The Family Man. “Alexa can now speak in Hindi and English seamlessly, and offers more than 30,000 skills from practising yoga to reciting Panchatantra stories.”

As the controversy raged on, union minister Piyush Goyal explained that he was all for investments. But, it should be within the legal process. Goyal said investments should not create unfair competition to small traders and retail businessmen in India.