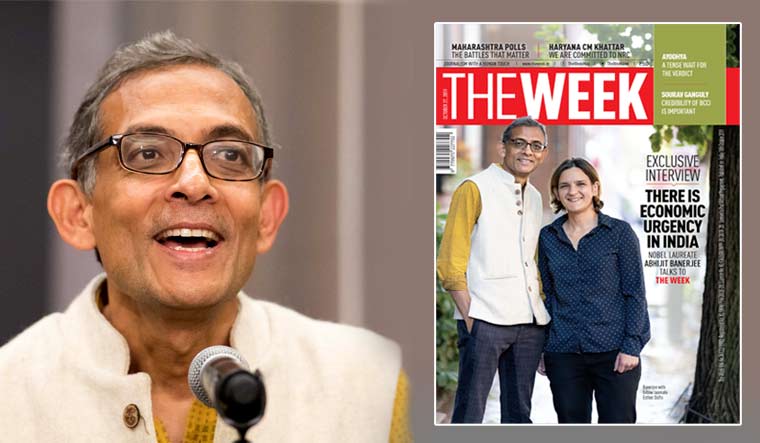 Nobel laureate Abhijit Banerjee urged the Indian government not to worry too much about fiscal deficit and instead, asked the Centre to spend more on people. "My prescription even today would be to not tighten the belt. Do not come up with a tough fiscal policy and pretend that the situation needs tough fiscal and monetary policies. It will be dangerous for the country," Banerjee told THE WEEK in an exclusive interview.

"The government should not forget that those (poor) people need money to survive. For the economic growth that is very important," he further added explaining about the significance of government spending. His comments come at a time when a section of economists have questioned the Centre for doling out sector-wise monetary reliefs to encourage consumption and arrest the current economic downturn.

Urging the Centre to act fast, Banerjee said, "Give money to the poor. Increase public spending. Induce growth. You have to see that not even a small biscuit factory is shutting down".

On the prevailing economic situation, Banerjee, currently the Ford Foundation International Professor of Economics at MIT, warned the Centre not to waste time before implementing measures to pull the economy back from a six-year slowdown. "There is an economic urgency in the country which the government has to address immediately. Do not waste time; things can turn worse," he advised.

Banerjee, a strong proponent of taxing the rich, said the Indian government has made serious lapses in its taxation policies for the affluent. "In fact, the current Indian government started taxing the rich. But later it backtracked because of pressure," he observed. The detailed interview will be published in the latest issue of THE WEEK and hit stands on Thursday.

Kolkata-born Banerjee shared the Nobel prize in Economics this year with his wife Esther Duflo and Michael Kremer for their extensive research in poverty alleviation in the emerging economies of South Asia, Africa and Latin America.