'Cycle with Kochi': How an environmental initiative is empowering women to follow their dreams

The sustainable urban development project is supported by a German organisation 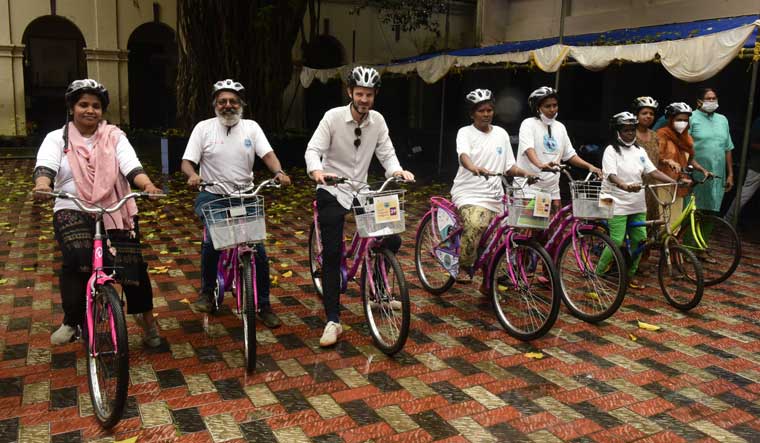 As part of the initiative, around 300 women and girls have been trained to ride a cycle | Yesudas C.V.

Sindhu T. is in search of a new job now. She was working in a paint company in Mattancherry before, to which she had to walk around 3km daily. She lost her job when the company faced a shutdown. Sindhu, who is in her late 40s, is determined to find another job.

“I will find a new job; I will cycle to my job place,” she said. “I do not have to depend on anyone else to travel now.” Sindhu is one among the many women—mostly in their 40s and 50s and are from economically weaker backgrounds—learning cycling as part of the ‘Cycle with Kochi’ programme. “I came to know about this programme from a neighbourhood group,” she said. “I always wanted to learn cycling. I got the chance only now.”

'Cycle with Kochi' is an initiative to make Kochi the cycling capital of India,” said Prakash P. Gopinath, the bicycle mayor of Thiruvananthapuram, who is a mentor for the initiative. “We want to create a generation of cyclists who would make Kochi a greener city and would create a stronger cycling culture here. Also, this unique training programme would empower many women, who otherwise have to depend on a male member of the family for the commute.”

As part of the initiative, around 300 women and girls have already got training. The initiative by Kochi Corporation and Cochin Smart Mission Limited is supported by Deutsche Gesellschaft für Internationale Zusammenarbeit (GIZ). GIZ is a German organisation with the self-declared goal of delivering “effective solutions that offer people better prospects and sustainably improve their living conditions”.

Stephen Fuchs, a diplomat and a spokesperson of the German embassy, said: “Germany has a big tradition in cycling. It is sustainable. [The initiative] would bring more cycles on the street and it takes cars away from the street. Millions of people die in India because of pollution, as also many places in the world. So, getting people off the cars and on the bicycles will help in reducing the death numbers. This training initiative in Kochi is attended by women who are working mainly as maids and fish sellers. Until now, they need to walk to their workplace, and it is a very cumbersome exercise. By learning to ride a bicycle, these women will have more confidence and they will be able to reach more places and generate more income. This initiative definitely will change lives.”

'Cycle with Kochi' is one among the many GIZ-supported initiatives for sustainable urban development of Kochi. “GIZ is providing financial and technical support to Kochi Municipal Corporation for the procurement of 80 e-autos. Implementing physical and digital way signages, and a web application for travellers (Kochi Ithile), is another urban transport and mobility programme supported by GIZ,” Fuchs added.

During Prime Minister Narendra Modi’s recent visit to Berlin, India and Germany signed several bilateral agreements with a focus on sustainable development. As per the accord, India will receive $10 billion in aid by 2030 to implement clean energy projects. “India is a very important partner for Germany to fight climate change,” said Fuchs. German development bank KfW is providing 100 million euros as a climate policy loan for Kerala alone. KfW is also providing 170 million euros for rebuilding the Kerala roads that were damaged in the massive floods in recent years in the southern state.

Kochi’s climate-friendly integrated water transport initiative, Kochi Water Metro, has received support from KfW to develop electric-hybrid ferries locally. These ferries will save 1.58 lakh tonnes of greenhouse gases in the next 20 years. For developing climate-friendly urban infrastructure in Kochi, GIZ is supporting three major projects. The organisation is supporting the corporation to introduce green-building certifications—based on the Leadership in Energy and Environmental Design (LEED) framework—to make building designs sustainable and climate-resilient. GIZ has assessed Kochi’s climate action plan and has given support in identifying the major drivers of greenhouse gas emissions. It is also providing technical support for establishing decentralised sewerage systems in Kochi.

Fuchs pointed out that a German university, the University of Stuttgart, has created a sustainability profile of Kochi and has proposed several projects with potential for GHG savings. Kochi is receiving German support for sustainable waste management, too. Based on the request of the city, GIZ undertook a pilot study for the collection and transportation of solid waste. GIZ is supporting Kochi in managing plastics and other non-biodegradable waste materials, too.