During lockdown they had one of their largest orders, from the UK’s Craft Gin Club 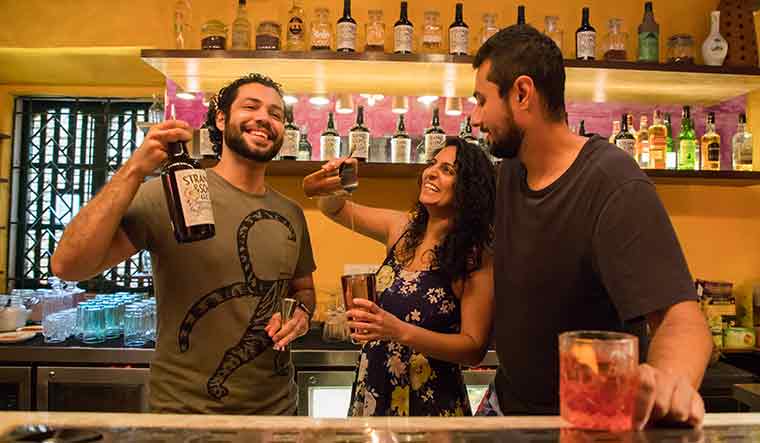 It was around 2015 that Sakshi Saigal, while pursuing her MBA from Barcelona, started noticing pockets in Europe fizzing with gin bars, especially gin tonic and cocktails bars in London. "I was really surprised that the back-label of these gin bottles listed botanicals, herbs and spices that you could easily find in India, like coriander, black pepper, nutmeg. At that point I was like why isn't anybody in India making premium gin?" says Saigal who after coming back to India went on to set up Stranger & Sons in 2018 with Rahul Mehra and Vidur Gupta.

Today Stranger & Sons, packaged in a stylishly stout bottle with a cork stopper, is best-known as an early innovator in the Indian craft gin landscape, a premium Indian brand that can be spotted in bars in London, Dubai, Singapore, Hong Kong and Bangkok. "A domestic consumer in India is always suspicious of premium Indian spirits. And we wanted to challenge that. And not only at home in India, but even globally," says Saigal, now ready with plans to expand to more international markets like New Zealand, Mauritius and Australia.

This aspirational Indian brand, once hardly available beyond Goa where it is distilled, is on an expansion spree. Available in Maharashtra and Karnataka, Stranger & Sons launched in Delhi this year and has just landed in Rajasthan too.  Not exactly a London dry gin, Stanger & Sons mostly has Indian botanicals and the robust flavour is a perfect blend of black pepper, nutmeg, mace, coriander, liquorice, cassia bark, angelica, juniper and four aromatic citrus peels including Gondhoraj lemons from Kolkata. While not as ubiquitous as Greater Than, another homegrown brand which was the earliest mover in India's gin renaissance, Stranger & Sons is a bit boutique with accessible characteristics. Priced a little under Rs 2,000, it appeals to a wandering tippler always on the lookout for exciting new brands with a story to tell, preferably with farm-to-table bona fides.

But Stranger & Sons is now growing beyond its niche credentials. It has constantly tinkered with a range of flavours and spirits and taken a number of initiatives to support the industry in a pandemic year while elevating the home-drinking experience in unique ways.

The brand launched Strange Times, their first collection of pre-batched cocktails and cordials, made in collaboration with some of Asia's best bars including five bars from Singapore, Tippling club, Neon pigeon, 28 Hong Kong Street, The Old Man, Native and Cin Cin and O Pedro from India. Pocket-sized, ready-to-pour, single-serve Negroni in a bottle is one of those ideas. Their collaboration with The Bombay Canteen restaurant yielded the refreshing Perry Road Peru, a distilled cocktail made of gin and pink guavas (pink perus). Easily refrigerated with a shelf life of up to six months, Perry Road Peru was a limited edition, pink-peachy goodness in seductively designed bottles.  The brand also launched a G&T kit with four bottles of tonic water at no added cost. "We wanted to make sure we build a really diverse gin that stands across all cocktails. So, it is not just about gin and tonic, but we really stand by a drink. program which has the Gibsons and the gimlet. Gibson is basically a martini, but with a twist. It has pickled onions. But we took that whole conversation to pickled tomatoes and apricots," says Saigal about the all-round flexibility of their brand.

During the lockdown they had one of their largest orders, from the Craft Gin Club which is the UK's biggest subscription club for gin lovers. They deliver some of the world's best craft gins at the doorstep of their subscribers. "They select one gin every month. And that gin is sent out to about 70,000 homes across the UK. It comes with a really nice kit with tonic water, some chips and chocolate and things like that. We were the gin of the month in September last year. At 70,000 bottles, I think it was the largest order we fulfilled," says Saigal. Apart from the many industry awards they have been winning, Stranger & Sons won the Gold last year at the International Wine & Spirit Competition with a score of 98/100. IWSC is awarded to the eight best gins in the world. This led to a collaboration with Four Pillars gin, a craft distillery in Melbourne, with both companies exchanging and infusing their indigenous botanicals. "We have really been able to add to the global conversation around gin and the perception of India in the international spirits market," says Saigal.