The Connaught serves up bold, new hotel design with its flooring

After a gap of eight years, The Connaught hotel welcomed back patrons this year 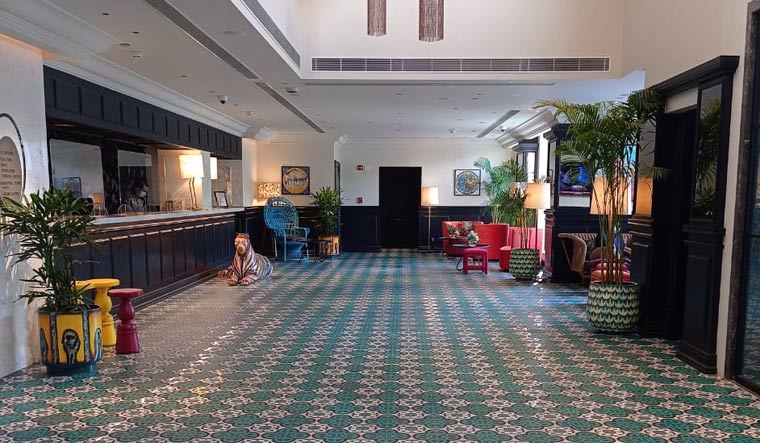 We don't usually consider business hotels as heritage properties. But The Connaught in the heart of Lutyens' Delhi is different.

Strategically located in one of the most expensive commercial hubs in the world, more endearingly known as CP, the hotel is nestled in the closest proximity to the capital's historical landmarks like India Gate, Rashtrapati Bhavan and Jantar Mantar. This fact alone lends The Connaught—a 104-room, four star property—the aura of an edifice primed to be considered modern heritage. But its recent new incarnation also makes it a chic interpreter of legacy, especially in the way the redesigned hotel has elevated its charm with a winning floor plan.

After a gap of eight years, The Connaught hotel in Delhi welcomed back patrons this year following extensive renovations undertaken since 2018. Indian Hotel Company Limited, the Tata company that runs the Taj group of hotels, acquired The Connaught in 2018 for a 33 year lease and gave it a complete makeover to start life afresh in 2021, heralding a new chapter in design and architecture for Taj Hotels as well. For what strikes the eye in the refurbished property which marries contemporary luxuriance with CP's art deco aesthetics, is the sumptuous spread of floor tiles undulating in ocean green and blue. Christian Lundwall from Sweden's Studio kin was commissioned as the principal designer of the The Connaught's bold, new face.

The studio is known for its minimal, modern approach to hotel designing across Europe and those ethos have been infused in The Connaught's interiors which Lundwall regards as a boutique urban sanctuary which is at once charming, eclectic, quaint and intriguing. "Generally we feel that the flooring is an often overlooked design element that offers unique possibilities to influence the way a space feels and is perceived. It is after all one of the few surfaces that you have to interact with virtually all the time," says Lundwall over email to The Week. "We brought this thought into The Connaught, New Delhi. The Bikaneri inspired tiles and flooring create a suave ambience for the entire hotel," says Lundwall whose play of warm colours with strong vivid patterns are unusual to hospitality interiors.

The result is an eclectic scenery with sudden, dramatic pops of colour like an orange couch in the lobby or a vintage yellow sofa in a standard room. Large windows overlook an abandoned hockey stadium next to a chequered wall with mon cheri-like profile faces staring back in retro eyelashes, often lending the space a Hockney-esque feel. But no matter where you are at The Connaught, the floor hangs around like a transfixing painting, an enchanting spell. "The floor serves as the backdrop. It is one of the main design elements and makes the space feel dynamic and colourful even though both walls and ceilings are predominantly white," says Lundwall on making the floor speak the language of the wall.