Kumaresh R, the man who wants to make learning of Indian violin joyous and easy

Kumaresh has launched a digital learning platform for Indian violin 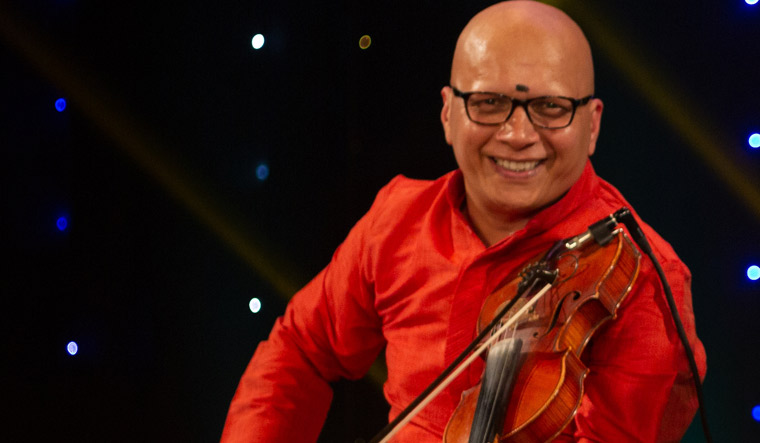 Kumaresh R. of the noted violinist duo Ganesh-Kumaresh, cannot help but mention the "dhanur veena" found in the ancient temples of south India. At the eighth century Chola temple, Thirumukkudal, near Mysore, there is a sculpture of a woman playing the violin sitting in a posture which Indian violinists have adopted for years. "This instrument very closely resembles the modern violin. People do not know that the Indian violin precedes the western one," says Kumaresh, also known as the 'fiddling monk' in Carnatic music circles.

"Even the word 'classical' in Indian classical music is a western nomenclature we copied. More than classical, our music is grammatical, a lot more deeper than period or era music. It is very relevant even today; it is very present," says Kumaresh, who feels the "guru-shishya parampara" also needs to adapt to the changing times. To that end, Kumaresh launched a digital learning platform for Indian violin. The portal was inaugurated by tabla virtuoso Ustad Zakir Hussain on YouTube Premier, and is touted to be first of its kind digital learning experience of the violin in India.

"Lockdown, for me, personally, was a boon because I could play music for myself. I thought why not create a platform where anyone can learn the most defined musical system there is," says Kumaresh, who has been conducting online lessons on playing the Indian violin for more than 15 years now. Skype and Zoom, says Kumaresh, are limiting the number of people who can participate. "E-learning is like an international music academy. Anyone can start learning how to tune the violin, how to hold the bow, the grip, the posture, the position of all the 12 notes. They can pause the video in the middle, learn more about the challenges of learning the violin and how to overcome them. It can be very joyous and easy," says Kumaresh who wants to demystify the learning of traditional Indian violin by taking his e-course to music departments in schools. They are designed for beginners, intermediaries and advanced learners.

Kumaresh, a recipient of the Sangeet Natak Academy award, has traced a musical career spanning 48 years to change the way the world looks at the Indian violin by refining teaching methods and repertoire for his many students around the world. A child prodigy, he played his first concert when he was just five years old and completed his 100th stage performance even before he was 10.