The restaurant is run by Malayalam actor Maniyanpilla Raju and friends 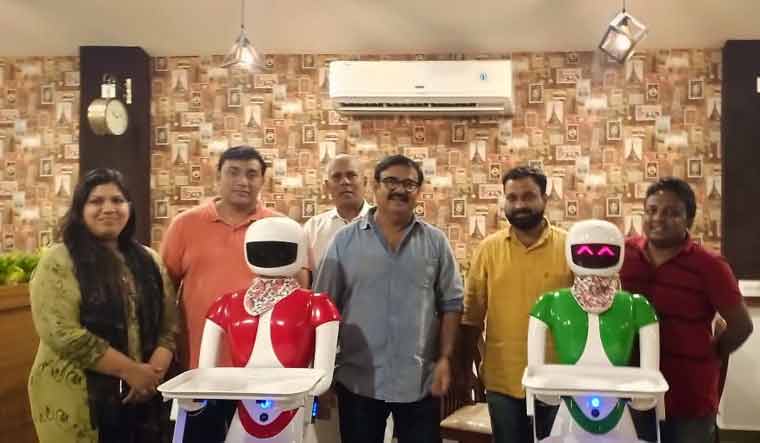 “Your favourite food is ready,” says Helen, a 'waitress' at Be@Kiwizo, a newly-opened restaurant in Kerala's Kannur district. She has two more companions—Aleena and Jane. The three of them have been winning over customers with their sophisticated appearance and tone. The catch being, they are robots.

Be@Kiwizo was initially launched as the first food delivery app in Kannur, with an aim to serve homely food to the customers. After the app became popular among foodies, the team which comprised of Malayalam actor Maniyanpilla Raju, Nizamudhin C.V., Sajma Nizamudhin and Vineeth M.K., put their thought to how innovative technology could be brought into the hospitality sector. That is how they zeroed in on the idea of introducing robots, a relatively unheard of phenomenon in the restaurant scene in India.

“The robots are put together in India, with their bodies imported from China. They operate with programmed sensors. Customers can place their orders through the tabs placed on each table. Once the order is received, the task of serving food is assigned to the robots. They identify the table using the Radio Frequency Identification (RFID) placed near the tables. They are supposed to move through a pre-defined track,” says Nizamudhin, owner of the restaurant, who is a civil engineer by profession.

The robots interact with customers, mouthing pre-programmed statements like ‘This is my way’, for instance, when they face any blocks en-route to the table. They are also programmed to say: ‘Your favorite food is ready’. A separate team manages the mechanical operations of the robots at the restaurant. Besides Helen, Aleena and Jane who serve food, another robot named Abdu entertains children who come to the restaurant. Striking up an equation with the kids, Abdu fascinates children with statements like ‘walk with me', 'hug me' or dance with me’.

The response to this creative innovation has been huge, says the team. “Customers have been rushing to the restaurant. Though there are 300 seats here, it seems insufficient. BookingS for the upcoming week are already closed,” says Nizamudhin, adding that they get customers from distant places, too, who are keen to be served food by robots. The restaurant also has a separate stall—Baking Mummy—where they sell homemade cakes.

In the future, the team hopes to start a technologically-advanced food village in Doha. Meanwhile, they also plan to implement interesting changes in the robot servers at the restaurant in Kannur.