Cinderella reimagined: Zendaya steals the show at the 2019 MET Gala 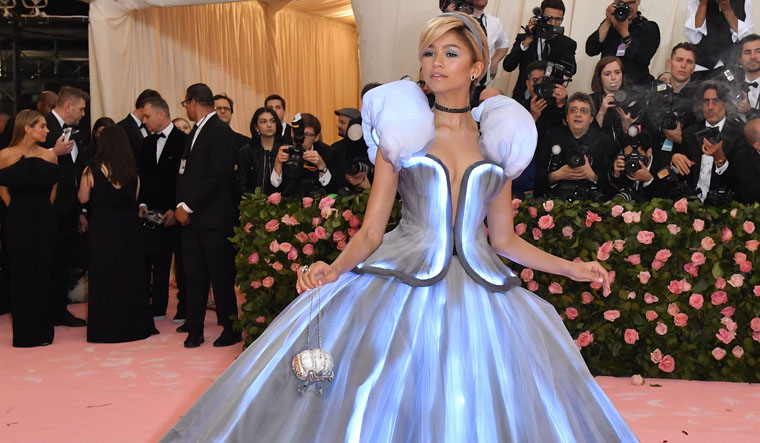 The biggest night in fashion, the Met Gala, showcased extravagant and epic costumes from major stars like Lady Gaga, Cardi B, Miley Cyrus and Jared Leto, but 22-year-old American pop singer Zendaya stole everyone’s hearts with a dream costume. She has a history of committing to the MET Gala theme and this year was no different. She stepped on to the red carpet in a black and blue corseted ball gown with white puffy sleeves and a jaw-dropping A-line skirt. The Greatest Showman actress attended the star-studded event on Monday night looking exactly like Disney’s Cinderella in a bold blue gown custom designed for her by Tommy Hilfiger.

She was accompanied by her fairy god brother, stylist Law Roach, who himself has been designing clothes for stars for years but has never attended a Gala. With a wave of his magic wand and a couple wisps of smoke, her entire outfit lit up straight from the tip of the dress to her sleeves—a magical transition that had jaws drop. She played the role perfectly by styling her hair in a blonde French twist, complete with a light blue head band and a black choker. A glittering pumpkin-carriage clutch and “glass slippers” was an added effort.

But, Zendaya’s devotion to delivering the fairy tale dream didn’t stop there. As she walked up the museum’s grand staircase, the actor played on the lost shoe trope from the famous film, leaving her glass heel on the carpet. “Most people just walk a red carpet, Zendaya performed a whole movie on hers,” one critic wrote. The concept for the look came from Zendaya’s own career evolution. The child star is set to have her debut in a teen drama called Euphoria in June, and Roach wanted to pay homage to her roots. “[It is] the total opposite of every character I think she’s ever played and a huge stretch from K.C. Undercover,” says Roach. “It’s almost like this is the last hoorah and the last time people will identify her as a Disney princess—which isn’t a bad thing.”

"It has to be literal enough that people get it. When you see Cinderella, you know right away it is her; the baby blue dress and the hair and the French twist all work together," he said.

Underneath the magic. Thank you to all the very very smart people who somehow built and made this dress work💙

The dress and its accompanying red carpet performance offered the ideal combination of style and spectacle, fitting for the evening's theme,"Camp: Notes on Fashion."