The first British newspaper in India was a satirical tabloid 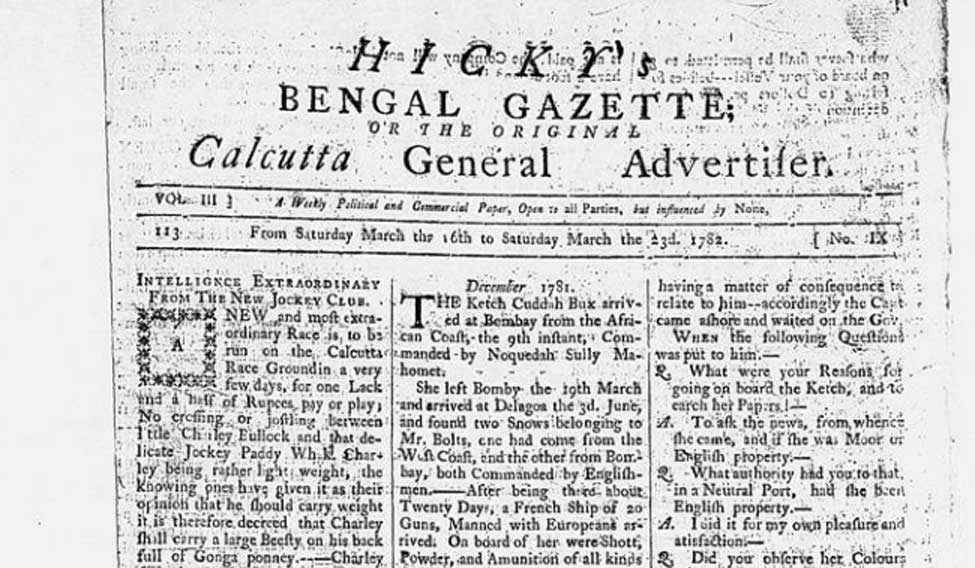 Started in 1780 by Irishman James Augustus Hicky, Hicky’s Bengal Gazette was the Indian subcontinent’s first newspaper. The Gazette was a weekly publication, typically running at a length of four pages, with three columns of text.

The Gazette was almost solely the product of J.A. Hicky’s labour, with Hicky acting as writer, editor, and publisher. The paper was a mixture between tabloid and satire–rather unlike the more serious tone of newspapers in Britain at the time, which had just won the right to report on Parliamentary proceedings. Though Hicky’s Bengal Gazette was ostensibly concerned with political developments within the East India Company, Hicky primarily focused his coverage on the mockery of his personal enemies. For example, in an article dated June 9th, 1781, describes the disappointment in Calcutta over the lack of a celebration of the King’s birthday in the colony. Among the discomfited include “Mrs. Bacon-Face,” “Pomposo Brandy-Face,” and “Sir Christian Turkey”—not names one would expect to find in a newspaper!

Behind each of these unusual names is a story indicative of life in Calcutta’s colonial community. For example, one of the characters in the story below, an individual referred to as “Nosey Jargon,” was a recurring target for Hicky. As William Hickey (no relation) describes in his Memoirs, “Nosey Jargon” was a sobriquet given to an Italian architect, Edward Tiretta. Early in his days in Calcutta, Tiretta made the poor decision of appearing at a ball in a “full trimmed suit of rich velvet.” Hicky took notice, and from then on, somewhat inexplicably, Tiretta became known as “Nosey Jargon” in the pages of the paper.

Despite the paper’s satirical tone, it was widely read by members of colonial society at the time—a fact that eventually proved to be the paper’s undoing. Hicky’s criticism of Governor-General Warren Hastings, and his particularly malicious ridicule of Hasting’s wife, landed him in jail repeatedly. When Hicky defied Hastings by continuing to publish while in jail (an act that elicited an outpouring of sympathy from readers), Hastings decided to take another route to quiet Hicky; he funded a rival publication, the India Gazette. Its comparatively moderate content drove Hicky out of business in 1782.