Big China and puny Pakistan! That is how most Indians—not just laymen, but even strategic thinkers—have been viewing the two hostile neighbours. The former is easy to handle; the latter is a tough nut to crack.

But, Pravin Sawhney and Ghazala Wahab say both are tough nuts to crack.

The opening line of their forthcoming book’s prologue says it all, and is scary: “Let alone China, India cannot even win a war against Pakistan.” Not because of the parity that Pakistan is believed to have acquired through possession of nuclear weapons, but because it has been building military power, whereas India has been building military force.

The book, though titled Dragon on Our Doorstep, is not just about China. It is about India’s military vulnerabilities which both the adversaries are exploiting through concerted attempts. The book, written with the precision of a tactician and the vision of a strategist, discusses every possible conflict point, every possible battlefield, every technology that could be put to use, every diplomatic option that could be explored in a conflict with either of the powers.

The excerpts below briefly discuss a possible scenario in Ladakh.

If there is one place where foresight has converged with geography, it is Ladakh, the only area where China and Pakistan have forged a physical link. It is also the only place where the threat of a two-front war against India is in the realm of possibility and not mere conjecture. And this is one confrontation that has been in the making for close to half a century.

Like the stones on the wei qi board, where each player tries to surround the opponent in such a manner that he is left with no option but to surrender, China and Pakistan have been encircling Ladakh, limiting India’s options with each patient move. It is only a matter of time before the two strategic partners decide to inflict the final blow. From their perspective, they have reasons to do so.

The reason for Pakistan is India’s new stance on Jammu and Kashmir. Instead of the Kashmir resolution, India, under Modi in August 2016, declared its intention to get back the Kashmir territory under Pakistan (and China) occupation. China, which regards the CPEC [China-Pakistan Economic Corridor] as important for its global rise, is not pleased with India’s altered position on Kashmir.

Therefore, the Pakistan Army’s strategic objective for a war in north Ladakh could be to provide depth to the CPEC; the political objective could be to make India’s hold over the Kashmir Valley tenuous; the military objective could be to force the Indian Army out of the Siachen Glacier; and the diplomatic objective could be to draw the international community’s attention to the possibility of a full-scale war between adversaries with nuclear weapons. China would surely welcome depth for the CPEC. Given China’s capabilities and Pakistan’s acquired expertise, the conflict in north Kashmir could be a non-contact war.

Given its topography, extreme weather conditions at altitudes of 18,000 feet and above, and lack of infrastructure on the Indian side, it is a mammoth task for the Indian Army to guard DBO [Daulat Beg Oldi] and surrounding areas including the Depsang Plain. Called the sub-sector north, this area is extremely vulnerable to ingress by the PLA [People’s Liberation Army] as they have roads on their side right up to the LAC [Line of Actual Control].

The PLA has constructed a road from its garrison having battalion strength (1,000 troops) near the KK Pass to its post on the pass. From atop Teram Sher Glacier, west of the KK Pass, the north and central portions of the Siachen Glacier are in full view. What stops the PLA from helping the Pakistan Army with good observation from Teram Sher Glacier? Aided by the observation provided by the PLA, the Pakistan Army could fire its Babur cruise missiles to interdict the Indian Army’s logistics lifeline from the base camp to the glacier and on troops’ positions itself. The contention of the Indian Army that they would retaliate with BrahMos missiles is unrealistic. What if the BrahMos kills Chinese citizens who are in PoK [Pakistan-occupied-Kashmir]?

This could anger China which might decide to throw its weight behind the Pakistan Army to enforce the NJ 9842-Karakoram line with implications for India. The PLA could share its asymmetrical military assets including anti-satellite capabilities, armed unmanned aerial vehicles and cruise missiles with the Pakistan Army. They could exercise all options short of war. The PLA Special Forces could occupy Fukche and even DBO’s advanced landing grounds. After the IAF activated these advanced landing grounds, China had protested to India. It will not be possible for the Indian Army to dislodge PLA forces from the advanced landing grounds without serious escalation. The PLA could move its forces to where they had come in April-May 2013 facing the Indian Army battalion in Burtse. With the Pakistan Army pounding Babur missiles, it will be difficult for the Indian Army to send logistics and troop reinforcements to the Burtse battalion. Any use of the IAF [Indian Air Force] during this period will escalate matters forcing the PLA to fight in self-defence.

In a military pincer, Indian positions on the Saltoro Ridge and the Siachen Glacier could be outflanked. The Pakistan Army could attempt to capture NJ 9842 in sub-sector west presently held by India, and the PLA could sever India’s operational logistics by land and air maintenance to sub-sector north facing the Chinese in Ladakh. In an area of little collateral damage, the two allies have the capability and reasons to send a powerful message to India.

The above scenario could lead to two consequences: one, Indian troops after weeks of accurate pounding by Babur missiles, which would affect their lifeline especially if kerosene pipelines burst, could be forced to vacate the north and central glacier, partially or fully. Two, as the consequence of India’s BrahMos firing, which might kill Chinese workers, the PLA could take a tough position by quick mobilization, thereby further limiting India’s options. Use of the IAF would be dangerous. Keeping the troops on the glacier without much overhead cover and logistics would be suicidal. Withdrawing them, which would be celebrated on Pakistani television, would be India’s defeat.

This war could have three distinctive features: it would be slow and long-drawn-out rather than short, swift and intense; Pakistan would keep the war knowing that India lacks the capability to enlarge it; and it would be non-contact, implying no troops assaulting each other at high altitudes. 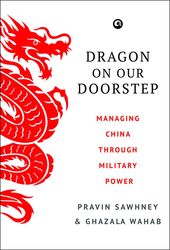 All these years, as India was fighting the Pakistan Army in the west on the Siachen Glacier, the eastern front facing China was quiet. This changed with the 2013 Depsang intrusion—India’s eastern front became more dangerous than the western one. The PLA, without any fight, managed to compel India to alter the LAC in the area; it may only be a matter of time before the PLA shifts the LAC still closer to Sasser Ridge beyond China’s 1960 claim line. The Indian Army on the Siachen Glacier wedged between the two—the Pakistan Army west of Saltoro Ridge and the PLA east of Sasser Ridge—would be hemmed in from both sides.

(These extracts have been taken from the chapter Threat to Ladakh.)

Dragon On Our Doorstep: Managing China Through Military Power

By Pravin Sawhney and Ghazala Wahab