Why Lord Ganesh idols are installed in these dargahs 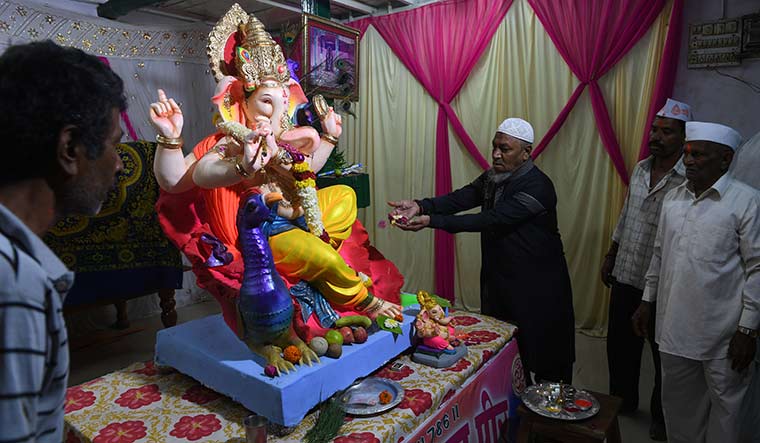 United in devotion: Hindus and Muslims participate in the Ganesh Utsav at the Kharkana dargah in Kurundwad | Bhanu Prakash Chandra

Towards the end of August, the Bairagdaar dargah was decked up to welcome a special guest—an idol of Lord Ganesh. There was a grand procession, which saw Hindus and Muslims in the area come together for 10 days of festivities.

The town of Kurundwad, 11km from the Karnataka border in Maharashtra’s Kolhapur district, is untouched by the recent communal polarisation in Hubballi over installation of Ganesh idols in the Eidgah Maidan. In fact, at least five dargahs here have been installing Ganesh idols on their premises in a tradition that is at least 50 years old.

The town of 30,000 is an oasis of communal harmony. While neighbouring districts have had communal strife, Kurundwad has observed Ganesh Utsav and Muharram with equal fervour for years.

Says Zameer Pathan, a member of the dargah’s organising committee: “In 1983, the people of Kurundwad celebrated Ganesh Utsav and Muharram on the same day (as the dates coincided) by installing the idol of Lord Ganesh inside the dargah. A joint celebration marked the festivities the following two years, too. Again, in 2018, 2019 and 2020, the festival dates coincided, and we installed the deities together and offered prayers for 10 days before the visarjan (immersion).”

Radiating religious amity, a Muslim usually installs the Ganesh idol, and an elder of the community is chosen to perform the aarti. Likewise, during Muharram, a Lingayat youth is picked to carry the Pir (an icon decorated with colourful clothes symbolising the Pir is carried in a procession) to the dargah. The Muslim families take turns to sponsor the Ganesh idol, and the prasad—chonga (a sweet chapati) for Muharram and modak for Ganesh Utsav—are interchanged. The Muslims also apply a fragrant paste on their foreheads, much like their Hindu brethren.

According to the locals, the Peshwa had given Kurundwad as jagir (land grant) to the Patwardhan family in the 18th century. The Patwardhan had encouraged his people to celebrate each other’s festivals, which is a tradition they still take pride in.

“The Ganesh idol is installed at Shelke, Dhepanpur, Kharkana and Kudekhan mosques, too, and all of them are at least a century old,” says Rafiq Usman Dabase, caretaker at the Kharkana dargah. “My father, Usman Chand Dabase, along with his friend Jamadar used to celebrate Ganesh Utsav. Today, the third generation continues the tradition, as the festivals bring communities together and inculcate a sense of brotherhood.” 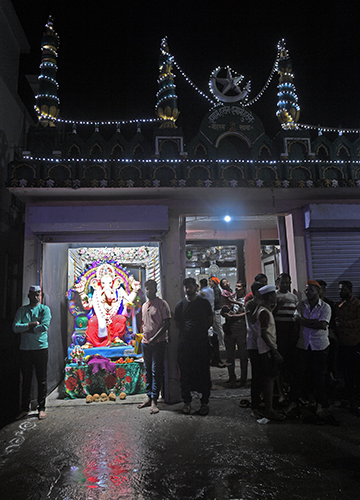 Vasant Salunkhe has been carrying the Pir during Muharram at the Kharkana dargah for the past eight years. “My father used to be associated with the festivities and now I volunteer to do the seva (service) each year,” he says. “When I am carrying the Pir, both Hindus and Muslims take my blessings. I visit the dargah every morning to pray, like I would visit the Datta Mandir, Hari Mandir or Vishnu Mandir. The Muslims celebrate Ganesh Utsav every year. That is the uniqueness of our town.”

Says Saklen Jamadar, a flower merchant who decorates the Ganesh pandal: “I belong to the third generation that has kept these rituals intact. During the Ganesh Utsav, we hold a peace prayer at 5am every day and you can see youth from both communities doing the dua (prayer) fervently. The theme for the lighting is our tricolour.”

At the Shelke dargah, people sing songs of devotion to Lord Ganesh, and Hindus and Muslims take turns to perform the aarti. Sunil Kharade, whose house is opposite the dargah, says, “The Ganesh Utsav was dull in the past two years because of the pandemic and the floods. This time, it is grand. The Pir being carried in a procession along with a band during Muharram is a spectacle.”

Kharade feels that communal hatred is meaningless in a world where everyone is interdependent. Pathan agrees. “God created man and woman, and society created different castes and communities,” he says. “They divided gods among themselves. Not just the Pir or Ganesh, but also Shivaji Maharaj and Dr Ambedkar. I believe God is one, and He belongs to everyone. Festivals are an occasion to come together and embrace each other as the devotion is the same. Like a bird that feeds on the grains offered at both a temple and a mosque, human beings should accept each other.”

Sharat Bhonsle, treasurer of the Shivaji Mandala, which installed a Ganesh idol at the Dhepanpur dargah, says the village firmly believes in the Sanskrit phrase ‘Vasudhaiva Kutumbakam’ (the world is one family). “We celebrate Ganesh Utsav, Muharram, Datta Jayanti and Shiva Jayanti together,” he says. “We want to tell society that we can coexist despite our differences.”

In a changing political landscape, however, there are people who frown on such practices. Some Muslims insist that the idol of Ganesh and the Pir be installed outside the mosque and in the “Muharram khanas” (an extended portion of the mosque housing a tomb of Sufi saint) as Islam prohibits idolatry. But the opposition is only from the Sunnis who worship neither the Pir nor Ganesh; most dargahs here belong to the Shias and namaz is not offered there.

On the other side, there have been louder, more muscular celebrations of Ganesh Utsav, encouraging only Hindu participation.

The residents of Kurundwad just hope that they can continue their traditions and live in harmony.