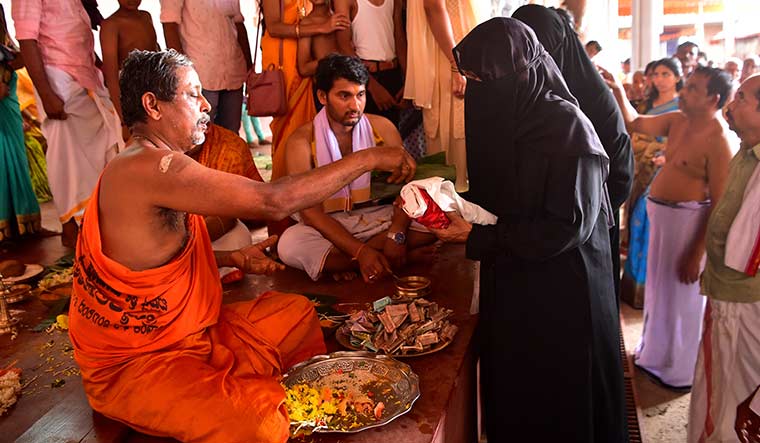 One god, many names: Muslim women at the Kumaramangala temple at Bela in Kasargod, Kerala. They worship Lord Subrahmanya to seek release from kaal sarp yog (curse of the snake) | Jibin Chempola

The story of religiosity in India is not just the story of conflict, demolition or massacre. It is also the story of interfaith prayer, embracing another religion’s customs and rituals without shedding one’s own. Even as the dogmatic take extreme positions and incite intolerance, common people across the country live in harmony and brotherhood, in peaceful oneness.

They reflect, in various shades, the exalted tradition of enlightened teachers like Sankardev and Kabir, Ramakrishna Paramahamsa and Shirdi Sai Baba. This is but natural in a country that has seen Dara Shikoh translating the Upanishads into Persian; and in modern times, an ordinary Muslim of Chhattisgarh, Razzak Khan Tikari, performing the last rites of his Hindu friend Santosh Singh in 2015; and Chief Justice of India Uday Umesh Lalit doing humble service at the Baba ki Dargah in Nagpur. The custodian of the dargah was invited to the swearing-in of the chief justice this August.

Almost all pilgrims to the Ayyappa temple in Sabarimala, Kerala, also worship at a mosque dedicated to Vavar, a Muslim warrior, on the way. The Golden Temple in Amritsar, the holiest site for the Sikhs, attracts people of different religions every day. The Baha’i House of Worship, better known as Lotus Temple, in Delhi encourages people of all faith to participate in its prayer service several times a day.

In the following pages THE WEEK takes you through soul-stirring stories of interfaith worship from across the country.