The tomb of Khamman Peer Baba in Lucknow attracts Hindus 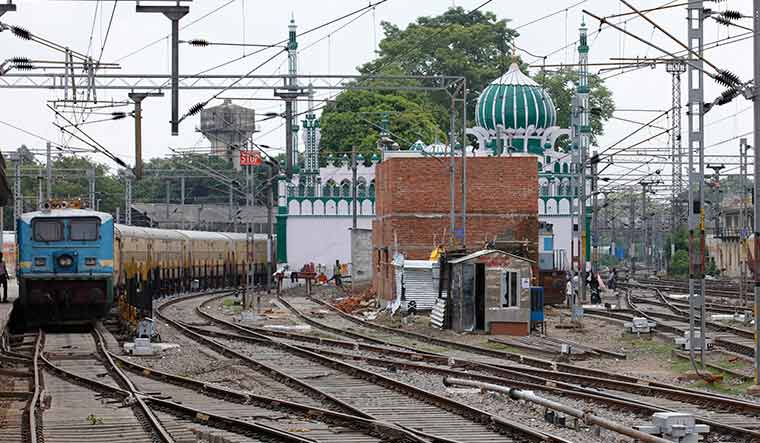 The devotion trail: The mazar of Khamman Peer Baba in Lucknow | Pawan Kumar

Nestled amongst tracks, at Lucknow’s Charbagh railway station, is a mazar of hazy origins but doubtless faith. This is the final resting place of Shah Syed Qayyamudin. His devotes know him better as Khamman Peer Baba.

It is an oppressive summer day, but the mazar is overflowing with devotees. They walk on the uneven ballast on the tracks, strewn with empty plastic bottles, packets of chips and chocolates, and the occasional scurrying rat, to pay obeisance to a being they know nothing about. Except, of course, that he will not let a single prayer go unanswered.

As one enters the mazar, to the right is a row of taps for wuzu (ablution before offering of the namaz). Most devotees who troop in are Hindus and do not use the taps. Nor are they asked to. Instead, they buy brightly coloured chadars and incense sticks from the shops outside before entering the mazar. Beyond the mazar is a mosque and at its opposite end a madrassa.

Once inside, devotees wait in orderly lines for their turn to offer the chadars. Some bring pieces of paper with their wishes written down, and festoon them to the iron grilles of the windows around the mazar. The wishes are myriad. One reads, ‘Baba give a job and ensure that nothing bad befalls my family’. Another says, ‘Please get good grooms for my two daughters’. A third pleads, ‘Take away the pain in my mother’s heart and lungs’.

Chadars offered, the devout sit around the mazar. Some with eyes closed. Some with open eyes which seem to be in a trance. Some mumbling prayers. Some crying in pain or gratitude.

Of late, some have taken to putting up locks on the window grilles, perhaps to ensure that their prayers are not blown away.

For Santosh Kumari Gupta, a homemaker in her late 40s though, it was just a simple prayer she said to herself that worked. Gupta is at the shrine with her 25-year-old daughter. Many in her family had visited the shrine over the years. But Gupta’s first visit happened this June.

“My daughter was extremely unwell. It was as though she had no awareness about herself. She had slipped into a deep depression. We were getting her treated at the King George’s Medical University but there was no improvement,” said Gupta between sobs. 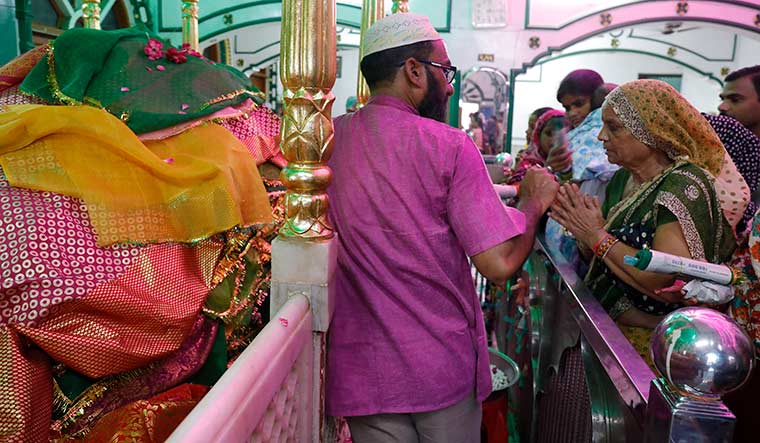 And so, Gupta visited the mazar with her daughter and offered a chunni.

“Then I just sat before Baba and with a pure heart offered an ardas for my daughter. I said, ‘Baba I don’t know how you will do it, but cure my daughter,’” she said.

Notice that the word Gupta uses is ardas. It is Sanskrit which means to request/ beg. She does not use the Urdu dua for her plea or the Hindi puja, even though the commonly spoken language in Lucknow is a delightful mix of Hindi and Urdu. In the universe of faith, language, dialect, colour, caste and creed are of no significance.

With her overwhelmed mother unable to complete her sentences, the daughter Sneha Gupta continued. “As soon as I left the mazar that day I felt as though a weight had lifted from my shoulders. I felt so light and positive. Since then, it has just been getting better,” she said. The duo tries to come to express their gratitude at least once a week.

The imam (the one who leads the prayers) of the Khamman Peer mazar, Mohammed Arshad Raza, says more than 90 per cent of those who visit are non-Muslims. Hindus make up the bulk, but Christians, Sikhs and others also come. He speaks of a devotee of Indian origin in Canada, who every year sends in a handsome donation for the mazar. Raza himself has visited, among many other prominent Hindu shrines, the Vaishno Devi temple at Katra in Jammu and Kashmir.

“Unlike other mazars, we make no solicitations for donation. The devotees offer enough to ensure that Baba’s home is taken care of,” he said.

There are no written records of the origins of Khamman Peer. The most widely cited legend about him is that he was part of a group of travellers with Hazrat Syed Salar Masood Ghazi, a saint whose dargah is in Bahraich (some 58km from Lucknow). They had set out from Mecca or Medina to spread the word of the Prophet. Whenever or wherever a traveller died, he would be consecrated. ‘Aramgah’ (final resting place) is the word the imam uses to describe this place of rest.

As Khamman Peer was Hazrat Ghazi’s contemporary, it is assumed that they died around the same time—some 900 to 950 years ago.

The area where the Charbagh station stands was once a jungle. The British cleared it to lay railway tracks. To their utter surprise, every time they laid a track around a small mazar, it would be uprooted overnight.

“Baba appeared in the dream of one of the engineers and said the railway line would never come into being if his resting place was disturbed,” said the imam. And so, the tracks were laid in such a way that the mazar remained undisturbed. It was only in the 1990s that the mazar took its final, larger shape spread over some 7,000 square feet.

Even in its small, insignificant form though, the throng of devotees at the mazar had never thinned. Deepak Singh Rajput, 30, is a schoolteacher who had first visited the dargah as a child with his father and grandfather. Their faith was transmitted to him.

“I live some 2.5km from here and have often walked barefoot during summer to worship Baba,” said Rajput.

Rajput’s most ardent wish was to get married to the girl of his choice. She belonged to a different caste and thus convincing the families was a prickly issue. The fruition of that wish took three years, and Rajput is convinced that Khamman Peer had a role to play in it.

He describes himself as a “50-50 devotee” whose belief in Sai Baba is as strong as that in Khamman Peer.

“You ask, you receive. Why question who grants your wishes,” he said.