How Ajmer Sharif Dargah empowers seekers of all hues

Despite recent controversy, the dargah has retained its secular character 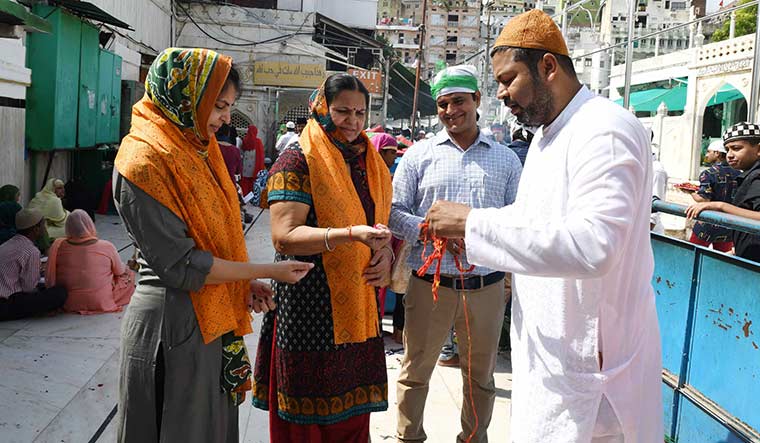 Seeking solace: Nishtha Modi (first from left) along with her family at the dargah | Sanjay Ahlawat

It is a glorious morning at Ajmer Sharif Dargah, the final resting place of the Sufi saint Khwaja Moinuddin Chishti, who lived in the 12th-13th century. A local television reporter, who claims to be associated with the Chishti clan, holds his mic in front of a mother and daughter from Ahmedabad waiting in the dazzling white courtyard.

“Now tell me,” insists the reporter. “You have come all the way here. Has anyone here given you reason for grief? Stolen your money? Hit you or bullied you or teased you?” The daughter, Nishtha Modi, shakes her head and professes her sense of sukoon (peace) after reaching the dargah. The reporter now faces the camera. “Yahaan koi Hindu Musalman nahi hai, sirf insaniyat hai (No one is identified as a Hindu or Muslim here. There is only humanity).”

Sufi saints had a major role to play in the journey of Islam in south Asia, and their dargahs have brought people of all faiths together. There are four main Sufi silsilahs (orders or denominations)—Chishtia, Qadiria, Suhrawardia and Naqshbandia. The Chishtia order is the most popular on the Indian subcontinent.

Khwaja Moinuddin Chishti, who was born in Persia, travelled far and wide before meeting his spiritual master, Khwaja Usman Harooni. As his khalifa (disciple), Chishti roamed through Iraq, Syria, Iran and Afghanistan before coming to Ajmer around 1190. He settled there for life and established the Chishti order.

The shrine of his tomb in Ajmer (he died in 1236) became the parent dargah of the Chishtia silsilah. In the paper Origin and Evolution of Chishti Dargahs in South Asia, authors Atia Rabbi Nizami and Mumtaz Khan write about 172 shrines of Chishtia dargahs they found across South Asia.

More importantly, they write about why the Chishtia silsilah found wide acceptance in India. “The success of a silsilah largely depends on the Sheikh’s ability to adjust and adapt in the mental and emotional milieu of the people of a particular region,” reads the paper. “The reason behind the Chishti success in the country was the same. They understood the Indian condition and the religious aspirations of the people. They adopted many Hindu customs and Buddhist practices like bowing before the Sheikh, presenting water to the visitors, circulating zanbil (a basket of palm leaves to collect food), shaving the head of new entrants to the mystic circle, audition parties (sama), and the chillah-i-makus (a practice believed to have been adapted from the sadhus).”

They note that the establishment of a dargah in a particular place was never dependent on the strength of the Muslim population settled there. “Sufis never tried to settle in Muslim-dominated areas,” reads the paper. “In fact, it is because of them that a large number of persons became Muslims. Moreover, the modern states of Rajasthan and Gujarat also have a sizeable number of dargahs.”

The Ajmer Sharif dargah is considered one of the holiest places in the world. Hundreds of thousands of devotees jostle to seek blessings at the tomb and ask for fulfilment of their ardent wishes by tying a sacred thread, offering a chadar (blanket) and a basket of rose petals.

Emperor Akbar is believed to have walked barefoot from Agra to pray for his son, Jahangir, at the dargah. Subsequently he became a frequent visitor. The Mughals patronised the dargah and Sufism. The tomb of Chimni Begum, the daughter of Shah Jahan, is also there in the dargah. The hauz, or the open water chamber, in the middle of the marble courtyard was a gift from Queen Victoria.

In 2001, Pakistan president Pervez Musharraf missed his date with the dargah when Kashmir talks broke down. He cancelled his programmes and returned to Pakistan, sparking the famous saying, “Wahi Ajmer jaate hai, jinhe Khwaja bulaate hai (Only those whom the Khwaja calls can come to Ajmer).” He made it to the dargah in 2005.

This February, Prime Minister Narendra Modi tweeted: “Presented the chadar which shall be offered at the Ajmer Sharif dargah on the urs of Khwaja Moinuddin Chishti.”

In June, a few khadims (clerics) raised provocative slogans outside the dargah after a political leader made some remarks about the Prophet. “There are some 4,000 khadims (collectively known as the Anjuman) in the dargah. We don’t know how some of them were led astray and made those controversial statements. The Anjuman is not an authority of the dargah. Most of the khadims condemned the slogans,” says Syed Nasiruddin Chishty, founder-chairman of the All India Sufi Sajjadanashin Council.

His father, Syed Zainul Abedin Ali Khan, is the current dewan of the dargah. Nasiruddin, who was recently declared his successor, organised an interfaith conference in New Delhi on July 30, which National Security Adviser Ajit Doval attended. “We want a ban on all radical organisations,” says Nasiruddin, who plans to travel to several states and engage with the youth as part of his inter-faith outreach.

The controversy apart, the dargah has retained its secular character for centuries. As dargah committee chairman Syed Shahid Husain Rizvi says, things that it represents will never change: the Ganga-Jamuni tehzeeb, mohabbat (love), milan (unity), aman (peace) and aapsi bhaichara (brotherhood) that mark the daily rituals, starting with the rosebuds brought from the temple town of Pushkar every morning. Or the langar of saffron-scented rice prepared in the 350-year-old chhoti (small) and badhi (big) degh (cauldron). Or the Hindu traders and shopkeepers selling sohan halwa in the dargah bazaar. Or how they, before opening shop every day, keep the shop keys on the steps of the dargah.

“The Khwaja is like a radio tower emitting high frequencies. People with a good receiving power will know how to capture it,” says Rizvi, emphasising the oft-repeated line, “Irade roz bante hai, badalte hai. Ajmer wahi aate hain jinhe Khwaja bulaate hai. (Intentions are made and unmade every day. Only those whom the Khwaja calls can come to Ajmer.)”