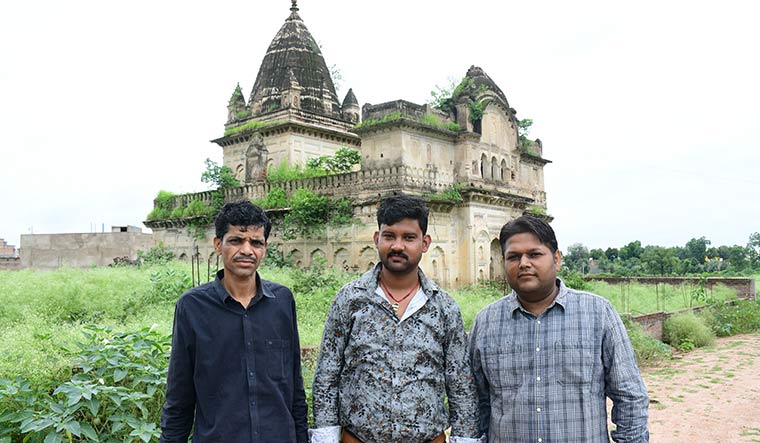 For over 80 years, an abandoned old Krishna temple, a typical example of exquisite Bundeli architecture, has stood forlorn on 1.5 acres of weed-grown land at Mamon village on the outskirts of Tikamgarh, 300km from Bhopal. In February this year, the temple became a symbol of religious harmony and social amity.

Cousins and real estate business partners Tipu Khan and Farid Khan, who had purchased the land last year, decided to donate 10,000 square feet of land around the temple so that it could be renovated and re-consecrated.

The decision came as a pleasant surprise for the local Hindus; the donated land is worth at least Rs50 lakh at market rates. The cousins also built a boundary wall around the donated land, spending Rs3 lakh from their own pocket.

The Hindus then conducted a recitation of the Sunder Kand of the Ramayan at the abandoned temple and raised Rs25 lakh on the spot for the renovation, to be done by the archaeology department. Tipu Khan, too, participated in the event. “The land lies bang opposite the well-known Shani Dev temple of Tikamgarh,” Tipu Khan, 32, said, “and we felt the beautiful temple should come alive again. We realised that 1,500 square feet of land on which it stands would not be enough for grand religious gatherings. So we decided to donate 10,000 square feet of additional land for the purpose.”

As Farid Khan, 40, said, Tikamgarh is known for its close-knit social and communal fabric. “We understand the sentiments of our Hindu brethren without their having to tell us,” he said.

The land belonged to the family of Kamlesh Richharia, 62, who has kept the idols in his home. “I had to sell the land for the cancer treatment of one of my grandchildren,” he said. “If some Hindus had purchased the land, they might not have donated such a large piece for the renovation of the temple. What Tipu and Farid have done will always be remembered.”

He said the temple had been abandoned perhaps because the Mamon settlement had moved a kilometre away from it. He said the Khans gave up an additional 1,000 square feet of land at the other end of the plot where memorials of his ancestors stood. This portion was worth Rs5 lakh.

Tipu and Farid said they would soon hand over a legal daan-patra (gift deed) to the district collector, Subhash Kumar Dwivedi. “This is a real example of religious harmony in Tikamgarh district, which has always been a peaceful area,” said Dwivedi. The cousins have the full support of their community, too. Abdul Gaffar, a family friend who was recently elected chairman of Tikamgarh municipal council, said, “Tipu and Farid have demonstrated the spirit of Tikamgarh. We have inherited a strong composite culture from our ancestors. We will strengthen it further.”

Mukesh Tiwari, an office bearer of the Vishwa Hindu Parishad, is equally appreciative of the Khans. “We have become their associates for the good work they have initiated,” said Tiwari. “It will be really great to have this temple renovated as a true symbol of communal amity.”