'The essence of religion is spirituality' 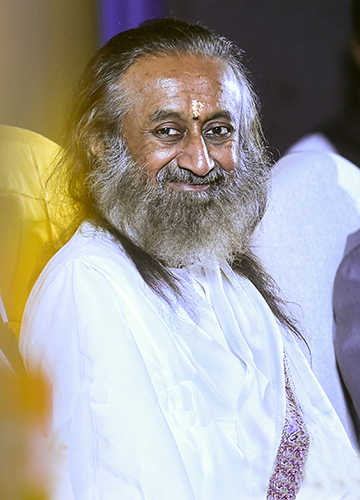 For thousands of years, India has stood as an example of peaceful coexistence of diverse religions and cultures. Pluralism is in its very DNA.

Unlike many countries and cultures which succumbed to armed conquests and foreign ideologies, India’s intrinsic spiritual and cultural resilience has withstood the test of time. The non-dogmatic, non-exclusivist nature of its worldview imbued it with a power that influenced even those philosophies and traditions that travelled here from different parts of the world. While music is prohibited in Islam, in India, the Sufis adopted many principles from the devotional music tradition of Hinduism. The singing of Qawwali amongst the Sufis, for instance, is deeply influenced by the age-old kirtan tradition in India.

In Karnataka, there is the legend of the 19th century saint-poet Shishunala Sharif whose ancestors hailed from Afghanistan and settled in Haveri. Shishunala Sharif became a disciple of the Brahmin saint Govind Bhatta at a young age. He grew up to become a revered spiritual leader and his devotional songs (Tatwa Padaas) in local languages are very popular even today among people of all communities.

The Indian way of life has long respected saints and people of wisdom and devotion, no matter which tradition or background they come from. Hindus, Muslims, Sikhs, Christians, Buddhists, Jains, Jews and Parsis have coexisted in this great land since time immemorial. Examples of interfaith prayers and people visiting one another’s places of worship abound. For hundreds of years, Muslims across Andhra Pradesh have flocked to the Sri Lakshmi Venkateswara Swamy Vari temple in Devuni Kadapa to offer prayers on the occasion of the Ugadi festival, the Telugu New Year.

Similarly in Kerala, Hindus visit and circumambulate the samadhi of the Muslim saint Vavar, before going to the Ayyappa Temple in Sabarimala, with the belief that Vavar is a good friend of Lord Ayyappa. Across the country, we find a large section of Hindus visiting various dargahs. Many pirs and fakirs of yore like Bulleh Shah are known to have spoken highly of the Vedas and the Vedantic philosophy. Bhai Mardana, hailing from a Muslim family, was Guru Nanak Dev’s best friend and his first disciple. The great saint Kabir Das continues to inspire people of all faiths to this day.

The essence of religion is spirituality—the core values of compassion, caring and acceptance. When the truth and beauty of our spiritual essence is realised as a direct experience, the conceptual rigidities of religion dissolve, making way for the true blossoming of human consciousness and the evolution of a progressive society. Whether it is Basavana’s movement in Karnataka or the Bhakti wave in Maharashtra and other parts of India, numerous saints from all communities and strata have demonstrated how ritualism and fanaticism can be overcome by true devotion and spiritual elevation.

The talk of righting the historical wrongs committed by one community against another keeps surfacing from time to time. One needs to approach this subject with sensitivity and common sense. There are people at every level of understanding and realisation. We cannot deny the fact of Mughal atrocities on the Hindus and the destruction of temples. But all this happened several centuries ago in a different social and political context. Inducing guilt in the present generation or alienating them for atrocities committed by barbaric leaders of the past will only create more division and damage the social fabric.

At the same time, it is also unjustified to be in denial and distort history and project tyrants like Aurangzeb as pious and devout. No doubt, there are lessons to be learnt here. We need to ensure that such things do not happen again. But we also need to move on. Holding on to the wrongdoings of the past will lead to discord. When victims continue to dwell on the atrocities committed against them, they become mired in a cycle of self-pity and hatred. And if the perceived culprit is made to feel guilty again and again, they become hardened and justify their mistake or deny it altogether. The perpetuation of anger on one side and guilt on the other breaks down communication and creates mistrust and artificial walls.

For religious harmony to prevail in a multifaith and multicultural society, we must inculcate mutual respect and reverence for all things divine, irrespective of their religious roots. One of the ways to do this is to introduce a broad-based education. Each individual, especially children, should be familiar with and appreciate all the other traditions and schools of knowledge in the world. The very goal of any religion is to enhance spirituality, to unite the hearts and minds of people with values that bring out the highest expression of life. This fundamental aspect of religion should be preserved rather than using it as a tool to create disharmony.

We need to focus on spiritual education because spirituality alone can root out destructive tendencies. Spiritual practices like meditation calm the mind and take one deep in their prayers, irrespective of what prayer one does or what religion one follows. Meditation, an integral part of Indian spirituality, enhances patience and understanding in people’s lives. It creates room for the ‘other’, and brings a certain calmness to embrace people who are different from you. Somewhere deep inside if one is fearful of the ‘other’, if one feels threatened, the person will become more aggressive towards the other.

Religious harmony cannot be sustained if even a small pocket of people lives by the dictum, ‘my God is better than your God and if you worship my God, then you will go to heaven otherwise you may rot in hell.’ Trying to coerce or allure people to convert from one religion to another in the name of salvation, healing or material prosperity is corrupting the very purpose of religion itself. Often we see innocent rural people being tricked into believing that another God is better than theirs. Such activities are detrimental to a progressive society.

We need to return to the values that form the essence of all traditions. Religion has three aspects: values, rituals and symbols. Moral and spiritual values are common to all traditions and the symbols and practices are what distinguish one tradition from another and give each of them its charm! The symbols and practices are like the banana peel, and the spiritual values, the banana. However, people seem to have thrown away the banana and are holding onto the peel.

Beyond the symbols and rituals, staying true to the spiritual essence and allowing harmony and oneness to flourish is the way forward.