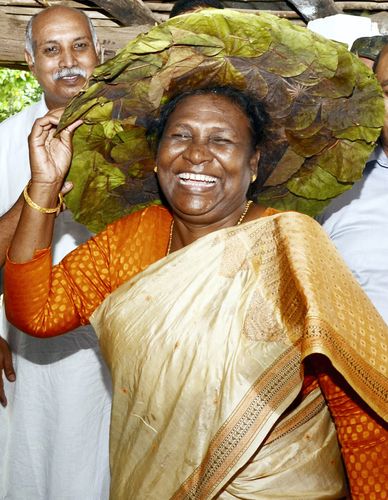 On June 22, Droupadi Murmu reached the Brahma Kumaris centre at Rairangpur in Odisha’s Mayurbhanj district. Inmates of the centre, including its in-charge, Brahma Kumari Supriya, were pleasantly surprised to see the presidential candidate of the BJP-led ruling alliance paying them a visit. The spiritually inclined Murmu, who could be the first tribal president of India, was at the centre to offer prayers and to meditate. The 64-year-old practices Rajyoga and meditation regularly. She became an ardent follower of the Brahma Kumaris sect after she was forced to deal with multiple personal tragedies. “Murmu remains just as simple as she used to be, despite the big announcement,” said Supriya. “We just celebrated her birthday a couple of days ago.”

Born on June 20, 1958 in a Santhali tribal family in Mayurbhanj’s Uparbeda village, Murmu has traversed a long path in life, with mixed experiences. Her father, Biranchi Narayan Tudu, was a farmer who had studied till class five. Her mother had never gone to school. With the help of her relatives, Murmu moved to Bhubaneswar as a child and completed her studies there. She finished her BA in 1979 from the Rama Devi Women’s College, which was upgraded into a university in 2015. Aparajita Chowdhury, the vice chancellor of the university, said it was a matter of great pride for the institution that Murmu could be the next president.

After finishing her studies, Murmu joined the state secretariat as a junior assistant. She got married to Shyam Charan Murmu, a bank officer, and the couple was blessed with a daughter. The happiness, unfortunately, was short lived as the daughter met with an untimely death. As she slipped into depression, Murmu gave up her job and moved to Rairangpur, where her husband was posted. The couple later had two sons and a daughter.

Once the kids started attending school, Murmu started teaching in a private school, but in an honorary capacity. She also got involved in public life and started working for a tribal educational organisation. She gradually got attracted to the BJP and was elected councillor of the Rairangpur urban body on the saffron party ticket in 1997. Three years later, she won the Rairangpur seat in the assembly polls after the BJP joined hands with the newly-formed Biju Janata Dal launched by Naveen Patnaik. The BJD-BJP alliance romped to power and Murmu was appointed minister of state with independent charge of commerce and transport. She remained a minister till 2004 and an MLA till 2009, when the BJP and the BJD parted ways.

It was the time Murmu’s life turned into a tragedy once again. One of her sons died under mysterious circumstances in 2009 and the other died in a road accident three years later. Her husband died of cardiac arrest in 2014 and life appeared bleak for Murmu and her daughter. And she turned towards the Brahma Kumaris for solace.

Multiple tragedies turned her into an ardent follower of the sect and she even suggested to her daughter to stay single like the Brahma Kumaris. Her daughter, who works at a nationalised bank in Bhubaneswar, however, is married, with a kid. Her husband is a sportsperson.

After the BJP came back to power in Delhi under Narendra Modi, Murmu was named governor of Jharkhand in 2015 and she completed her term in July 2021.

Murmu regularly visits the Rairangpur centre of the Brahma Kumaris whenever she is in town. She is also a frequent visitor to the sect’s headquarters at Mount Abu in Rajasthan. “Murmu is an extremely dignified woman with strong values and uncompromising principles,” said Santosh Satpathy, her principal secretary while she was governor. Brahma Kumari Geeta, who is in charge of the Bhubaneswar centre of the organisation, said Murmu’s life offered an example for all those who were facing challenges in life. “If one looks at her personal tragedies and the way she overcame depression she would come across as a great example for all,” she said. “It shows that with the help of divine knowledge everybody can face the world.”