The only one I have to prove anything to is myself: Yashasvi Jaiswal

Yashasvi, who is just 20, has gone from ‘errand boy’ to Rajasthan Royals opener 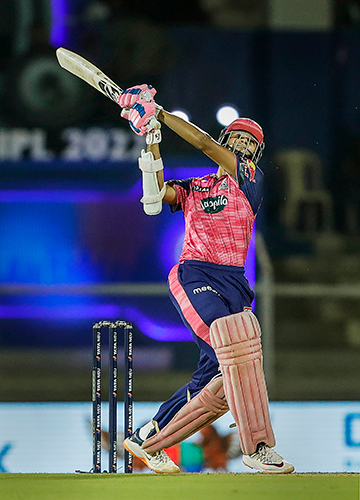 An 11-year-old boy from a tiny village in Uttar Pradesh dreams of making it big in cricket. With absolute conviction in his talent and a hunger for opportunities, he travels to Mumbai, the city of Sachin Tendulkar. He brings with him a small steel trunk box, a mosquito net, a folding cot and a heart full of hope.

A handful of years later, Yashasvi Jaiswal scores a century and four fifties en route to becoming player of the tournament in the 2019 U19 ODI World Cup. He then gets picked up by Rajasthan Royals in the 2020 IPL season and is now on the ever-expanding list of young Indian bats to watch out for. That he is one for the future was evident in the fact that the franchise retained him before the auction for Rs4 crore this year. “I have dreamed a lot, and that is enough to keep me busy for the next couple of years,” Yashasvi tells THE WEEK on a video call. “This is just the start. I have a very long way to go and I know I will stay the course.”

Though he is still settling into his role as the opener for RR, Yashasvi did play some impact knocks, such as the 68* against Punjab Kings. “[That was] one such day that I will tattoo on my body so that I don’t forget it,” he says. “It was very important for me.”

The story began sometime in 2011-12, when Yashasvi, along with an uncle, arrived in Mumbai. After staying a few months in one of the suburbs, they reached the Muslim United cricket club in Azad Maidan. They asked the club people if the boy could stay there. The uncle could not afford to raise his nephew. “It was a strange request,” says club manager Zulfikar Sheikh. “We did not allow children to just stay at the maidan like that. I asked the owners and they, too, were reluctant. But then someone told them that this boy was a good player. I think they saw a yearning in him and decided to take a chance. From that day on, he stayed with us for the next three years.”

A little to Sheikh’s left, on the muddy ground, sits his nephew Mudassir Khan. He is repairing bats with speed and precision. The 24-year-old was Yashasvi’s “bestest buddy”; the two “ate, played, slept and chilled together 24x7”. He shows me a WhatsApp message in which Yashasvi invites him to a match and Mudassir congratulates him on his victory. “I remember him as being passionate about the game,” says Mudassir. “He used to practise for hours into the night, long after everyone had slept and the entire maidan had become dark and deserted. Then he would be up at 5am and start running. I used to tell him that he shouldn’t overdo it, but he said it was the only thing that energised him. He would be willing to play with anyone and any team. He had no interest in anything else. No movies, not even any other friends.”

Mudassir shares another anecdote. Once, they were sitting on roadside carts and watching a game on a big screen outside Wankhede Stadium. “Yashasvi told me, ‘Today, we have to sit here and watch. One day, I will buy you tickets so that you can watch the game inside. I will be playing’,” he says.

Sheikh says he would give the boy food, cricket gear and also “Rs50-Rs100 for anything he would want to eat or drink outside”. In exchange, Yashasvi would help out with errands, cooking and other odd jobs. At the time, he was staying in a tent at Azad Maidan. “He was so kind that he would even assist the pani puri vendor in selling a plate or two,” says Mudassir. And then, suddenly, his face turns red. “The fact that Yashasvi used that as a publicity gimmick was not right. Especially given that the uncle (vendor) died later,” he adds, referring to the popular media narrative that Yashasvi sold pani puri at the maidan to make ends meet. 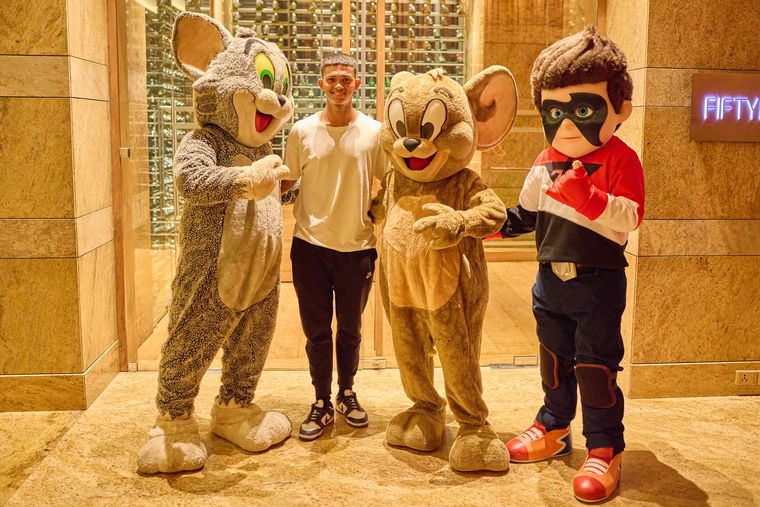 Taking a break: Yashasvi at a five-star hotel in Mumbai.

As the years went on, and as Yashasvi kept on polishing his game, he remained in constant touch with his father, Bhupendra Jaiswal, who owns a small hardware store in Suriyawan, Uttar Pradesh. Father asked the son to stay put with the saying, “Jo dar gaya, woh mar gaya (people who are scared will not achieve a lot)”. “He told me to always keep these three things—’sayyam (determination), saahas (courage) and dhairya (patience), and you will never go wrong,” says Yashasvi.

The Jaiswals are a close-knit, loving family. Yashasvi, a stickler for cleanliness, recalls assisting his father at his shop and getting it fully cleaned every Diwali before the puja. It was a family of six, and financing the boy’s cricketing dreams was beyond their means. If Yashasvi had to make it big, he had to do it on merit, and probably in a cricketing centre such as Mumbai. Also, he was not “great” at studies, which closed many other career options. “I never enjoyed going to school that much,” he says. “All I ever wanted to learn was English so that I could speak the language fluently.”

For every question in Hindi in this interview, he tries to answer in English. But, every time he has to make a point, he switches to Hindi.

Yashasvi’s own plan B was the Army. But he always believed in plan A. And that made the struggle somewhat bearable. The memory, of travelling in a bus from the suburb with a heavy backpack, is the one that flashes in front of his eyes when he thinks of his days of struggle.

One of those days at Azad Maidan, Yashasvi caught the eye of local coach Jwala Singh. Yashasvi played for the Rizvi Springfield school team and had been impressive in the Harris Shield tournament. Singh saw potential in the boy; Yashasvi had “weakness in the body, but fire in the eyes,” he says. The coach took him in, and bought him new shoes and a kit. He also enrolled him in his academy.

Desperate for his son to succeed, Bhupendra had apparently told Singh: “He has been a vagabond so far with nobody to help him. From now on he is your son. You make him a servant at your home. He will massage your legs and do everything for you. You order him around as you like. Just help him play cricket, because that is all he wants.”

Yashasvi kept playing, and soon made a name for himself on the Mumbai circuit. He started playing division A cricket at just 12, and would often face Ranji-level bowlers who were at least a decade older. He then joined the Dadar Union club and, in 2015, former chief selector Dilip Vengsarkar sent him to England as part of the club side. It was Yashasvi’s first international trip. He aced the assignment and went on to play U16, U19 and U23 cricket. He was also selected in the Mumbai Ranji team and became the youngest cricketer in the world to score a List-A double hundred, in the Vijay Hazare Trophy.

Those who have been close to him say that Yashasvi has been strong-willed right from the start. Singh recalls May 31, 2014, the last day at the academy before it closed for the monsoons. Yashasvi was preparing to go home to see his parents. A day before, Singh had asked him to come for practice before leaving. Yashasvi did not turn up. “I was very angry,” says Singh. “I asked him to come over and the moment he arrived I asked him to run ten rounds of the ground without shoes and socks. He did so obediently. He also completed net practice. With that, my punishment was over. But that night, when he came home for dinner, he said, ‘Sir, I decided to not go home. That is my punishment. Until I ace it in the Mumbai team now, I will not go home.’”

To push his ward, Singh would often take him from one match to another, making him play against a variety of opponents, even if unofficially.

Singh would also ask bowlers to rile him up. “He gets angry very fast,” he says. “It was a way of training him to not lose his cool.” Once, when they were in Gorakhpur, Singh’s cousin, an average cricketer, bowled Yashasvi. The boy was offended. “He said, ‘You have hurt my ego. Now I will show you.’ In his next innings, he continued batting till he wore out the bowler.”

During his time at Singh’s home, Yashasvi would run errands, occasionally cook, buy groceries and serve tea to Singh’s guests. He was economical with the money he earned. Singh recalls giving Yashasvi and another student Rs500 each to buy a new kurta for Diwali. “While the other boy bought an expensive one, Yashasvi chose a cheaper one. I think it says a lot about one’s attitude towards life.”

In his off time, he would sketch portraits of his coach, his family and friends. “I still sketch, but not a lot,” he says. “I am not enjoying it and that is why I stopped. The last time I sketched was when I made portraits of all my family members.” These days, he likes an ice bath. “Being in the pool is one of my favourite ways to spend quality time outside of cricket,” he says. “I love water.”

Over the years, as he went from one experience to another, Yashasvi “changed mentally”. “I have only emerged stronger, so much so that nobody can break me. Not mentally,” he says with a hint of sourness. I speak about Singh and something snaps. He wants to take a break from the interview. His brow furrows and his face gets solemn. He takes a pause, leans back and continues. “There are a lot of things I wish to say, but I will not say it now,” he says. “I will talk about them when the time comes. I talk a lot to myself because the only one I have to prove anything to is myself. I have nothing to do with anyone else.” This is in reference to Singh. During their eight years together, Singh had managed Yashasvi’s cricket and money. But, as the prize money kept going up and Yashasvi became older, the dynamics changed. The two are apparently not on talking terms, and Yashasvi refuses to talk about it. He now stays with his family, who have moved to Mumbai from Suriyawan.

Turbulence off the field had not distracted him from his game, though. The southpaw continues his ascent, and praise for him has come from various quarters, including from across the border—former Pakistani pacer Shoaib Akhtar urged his country’s players “to learn from Jaiswal’s story”, while “guaranteeing” that he will be part of the Indian team one day.

Yashasvi, though, is careful to not let the fame go to his head. “I refuse to relax and be distracted. For me, nothing much has changed. It is just that more people are happy with me now and they now believe in my capacity to work hard. Yes, it does occur to me that everything I have can go away in no time. But then, I tell myself that when I had started, I was a nobody. I had dreamed that I want to play high-level cricket. So, now that I have a lot, why shouldn’t I continue to dream?”