I have given all my money to dad and told him to keep me away from it: Tilak Varma

In his debut season, Tilak has already become a permanent member of Mumbai Indians 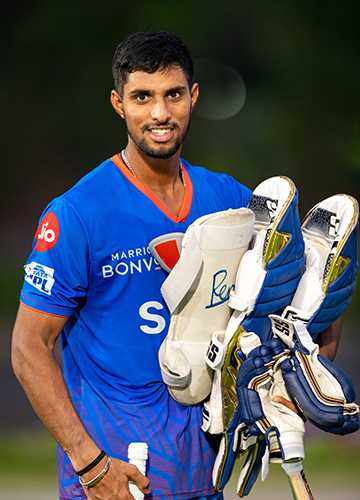 Though Mumbai Indians finished with the wooden spoon this IPL, there were a few bright spots, too. The arrival of Tilak Varma was one. The Hyderabad batter scored 397 runs in the season, the second-most for the team (behind Ishan Kishan), and was a mainstay in the line-up. He scored two fifties, with a best of 61 off 33 against Rajasthan Royals. “Expect to see more heroics from the youngster,” Sachin Tendulkar said after the match.

Growing up, choosing cricket as a career was a gamble. Tilak’s father, Namboori Nagaraju, was an electrician, and the family income was neither stable nor sufficient. “[We never had] the luxury to dream outside the traditional career options, because a good job and continuous income were crucial,” says Tilak.

Though his father wanted him to be a doctor, Tilak focused on gully cricket with tennis balls. His younger brother, Tarun, too, dreamt of sports; he has played badminton at the national level. “I will never forget what I had to leave to get what I have now,” says Tilak. “I missed all those important family functions, a close sister’s wedding and quality time with my parents. You need to treasure the moments you have with family.”

A memory of those days that he often remembers is the three-hour bus ride to get to training. “The worst part was that my huge cricket kit was not allowed on the bus and there was always a ruckus whenever I carried one with me.” At the time, he felt like a hitchhiker first and a cricketer second, he says, laughing. “But now, I have more than enough money to buy a car of my own.” At this year’s auction, Mumbai Indians paid Rs1.7 crore for the teen.

Having finished school, Tilak now wants a degree “only for the sake of it”. “Anything that is super easy, I guess,” he says. “My focus remains on cricket.” 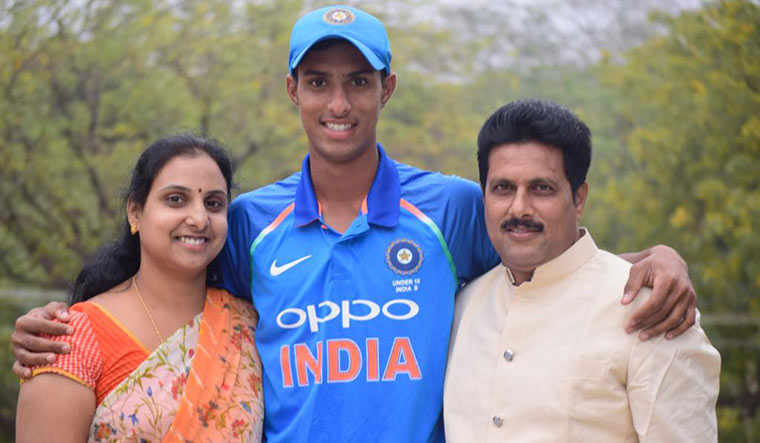 Pillars of strength: Tilak with his parents.

His first break came when he was picked for India’s U19 World Cup team. But the journey was tough. The southpaw gets emotional recalling his “extreme desperation” to establish a place for himself in his state team. “I tried very hard to become permanent in the U16 team,” he says. “I would go to the ground early morning, and would stay there till late evening. I did not miss a single day of the state camp. I used to miss out on meals and rest, and was totally frustrated.” He was 14 at the time.

The following year, he got a chance to play but got out for a duck against Goa. “Something snapped,” he says. “I got an inner calling to simply stay put and not give up. It was difficult because I was at my lowest point.” But, he kept at it, and scored a double century, two centuries and four fifties in the All India Vijay Merchant Trophy. Eventually, he advanced to the U18, U19 and Ranji level, before playing the IPL.

Coach Salam Bayash first saw Tilak as a ball boy “ready to catch the ball, but more keen on observing the batters”. He then saw the boy, 12 at the time, bat at the Barkas ground. “I asked his father to enrol him in my Legala Cricket Academy and I promised to take responsibility of his cricket expenses,” says Bayash. “There was a fire in him and he never once complained.”

With each competition he would win, Bayash would buy him some cricket gear. That would keep him motivated. The coach also helped him mentally. “I have always feared the unknown,” says Tilak. “What if I don’t succeed in cricket, especially since I had given up on studies? That anxiety that I would be left with nothing would really consume me at times. But the positivity from my parents and coach helped.”

Food helped, too. “He loved to gorge on chicken, mutton and basically anything that was food,” says Bayash with a chuckle. “He would discreetly eat chocolates from his teammates’ bags when they were playing.”

Now, as an IPL athlete, the meat is leaner and the plate is greener. And there is a lot of gym time, too. The 5’11” Tilak would not forgo it for anything.

He has also made friends in the MI team, and is its “official prankster”. Earlier in May, he surprised teammates Dewald Brevis, Riley Meredith and Tim David by swapping the cream in their biscuits with toothpaste.

Also into grooming, Tilak wants a tattoo of his parents near his heart.

But the priority is buying a house in Hyderabad. “[I am not letting the money] influence my mind,” he says. “I have given it all to my father and told him to keep me away from it. I know it is too easy to get distracted.”

Nagaraju is still pinching himself. “It has been a few months now,” he says, “but I am still as surprised as I was the first time I knew that Tilak had made it big in the IPL.” He recently got himself a job as an electrician at Bharat Heavy Electricals Limited and has paid off multiple loans worth 120 lakh. “There were times when I had to take loans even for their basic [sports] gear,” he says. “I had to do overtime so that there could be enough money to survive. Now, however, we are happy and settled.”